3 Ways to Use ‘Haul’ Videos in Ecommerce Marketing

According to Google, about 40 percent of shoppers who watch “haul” videos — which are a sort of show-and-tell for shoppers — will go to a store’s website or physical location, where, retailer’s hope, they will make a purchase.

What Are Haul Videos?

Haul videos are an emerging genre, wherein predominantly young, female shoppers describe recent purchases. The videos may focus on fashion, beauty products, home decor, or similar product categories. Often the video makers talk about product quality, product prices, and even the shopping experience. The items shown can be the results of shopping at a physical store or ordering online.

As a specific example, a recent haul video from a popular video producer, Tanya Burr, garnered more than 440,000 videos in five days.

Burr’s success is indicative of the genre’s growth. Last year, Google reported that “videos with ‘haul’ in the title have been watched more than 1.1 billion times on YouTube.” In fact, folks had watched more than 5.6 million hours of haul videos from January to September of 2014. 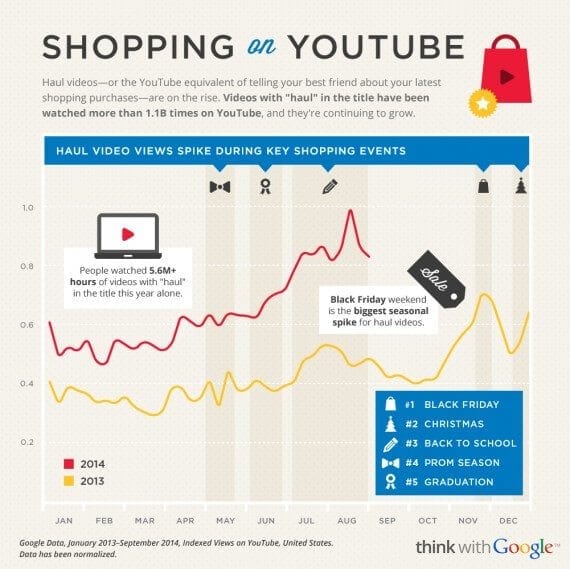 The haul video trend even made major news in 2013, when media outlets like NPR’s All Things Considered covered haulers.

Haul videos can be powerful for merchants. The videos are well received. They often feature multiple products, and the folks that watch them will shop for those products or similar about 40 percent of the time.

Ecommerce marketers can use the “haul” video genre to promote products and boost sales in at least three ways: (a) engaging video makers, (b) creating entertaining parodies, and (c) developing haul-like videos of their own.

Unlike other forms of product introduction or review, haulers can work with brands or retailers to promote products. This willingness to haul products from retailers may create a marketing opportunity for ecommerce businesses.

“For Caitlin Ellsworth, known as Glamourista16 [or more recently Caitlin Bea], hauling is a part-time job,” the 2013 All Things Considered report said. “When she started three years ago, her bouncy personality attracted not just tens of thousands of admiring fans, but lots of fashion retailers — and they came bearing offers.

“I had no idea what to expect when the first company approached me,” said Ellsworth in the NPR report. “It was from a cosmetic company and they just said, ‘Hey, I’d like to hear your feedback on this eye shadow, and it’d be awesome if you could feature it in a video.’ ”

On its site, NPR linked to one of Ellsworth’s hauling videos . In it, Ellsworth mentions products from Lululemon, Urban Outfitters, Nordstrom, American Eagle, and J Crew, and includes links to HauteLook, Sigma Makeup, and JewelMint.

To engage haul video makers, simply contact them via social media. In many cases, it will be enough to simply let haulers keep the products they feature. But some will also be willing to accept pay. Make certain that the relationship is transparent. There is nothing to conceal. The hauler should tell her audience that she received the products for free or that you asked her to review your product.

Ecommerce marketers may also be able to parody haul videos and still show off products. As an example, a popular BuzzFeed video, “If Guys Made YouTube Videos Like Girls: Shopping,” directly mocks hauling, but at the same time, does a nice job of describing a product like Suave’s 3-in-1 shampoo, conditioner, and body wash.

Similarly, in May 2013, Target released a video showing two dogs, Fritz and Chico, chatting about the awesome haul their owner just brought home from Target.

The video shows several specific pet products and gives viewers the idea that Target has lots of items for dogs. All of this is done within the confines of a very entertaining video.

Online marketers can produce their own haul video parodies to influence shoppers.

3. Make Your Own Haul-like Videos

Strictly speaking, retailers cannot make haul videos. The genre, after all, is about consumers showing what they bought. But it is possible, and maybe even fruitful, for retailers to offer the same sort of haul-like advice and opinions in video form.

To see this in action, watch of Macy’s #HelpMeClinton videos, featuring TLC host and stylist Clinton Kelly. In the videos, Kelly gives a candid opinion about how to choose or wear particular fashion items. Like haul videos, these sorts of videos might be the thing shoppers watch when they search online.