4 AdWords Settings that Work Against You

Pay-per-click advertising is a good way for companies to grow their businesses. Whether they are selling products online or trying to generate leads for services, it is cost effective and typically generates a positive return on investment.

Google AdWords is the leader in paid search advertising, with an 80 percent market share in the U.S. While there are other PPC platforms, advertisers seeking maximum reach should include Google AdWords in their PPC marketing mix.

But Google doesn’t make it easy for novice advertisers. There are several default campaign settings that can negatively impact your results — and some of them are difficult to understand, or even hidden.

Here are four AdWords campaign settings that can work against you.

To Google’s credit, it’s simple for new advertisers to get started. Just navigate to AdWords.com and create an account. From there you can start building your first campaign. When you click on “create your first campaign,” this is what you see.

What you see when starting your first Google AdWords campaign.

A “Standard” campaign is the default and is pre-selected. “Standard” sounds fine, right? Indeed, Google makes it appear as though this is the best option for most advertisers.

However, Standard campaigns do not include the option to incorporate many campaign best practices.

This is where the campaign settings page ends with Standard campaigns.

Compare that to the end of the page for the other campaign type option, “All features.” 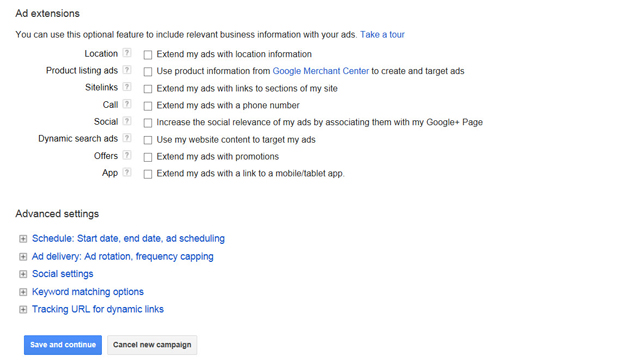 You’ll see “Advanced Settings” that weren’t available in the standard campaign option. Some of the features missing from standard campaigns are complicated and are not recommended for new advertisers.

But a crucial feature missing from standard campaigns is the ability to choose ad rotation.

Google’s default ad rotation choice is “optimize for clicks.” That means that Google will rotate your ad variations evenly for a brief period of time, and then will start showing the ad with the higher click rate more frequently.

To novice advertisers, this sounds like a good thing — of course you want to generate more clicks. But clicks do not necessarily translate to conversions. Site traffic is rarely the key goal for PPC advertisers. Rather, the goal is sales or leads. And just because an ad is generating traffic does not mean it is generating leads. Advertisers should be measuring conversions, either with web analytics or with AdWords conversion tracking, and should optimize their campaigns based on ads that are converting the best, regardless of click rate.

To do this, advertisers should select the option to “rotate evenly” or “rotate indefinitely.” Google discourages this option — which is why it’s not available with the Standard setting. 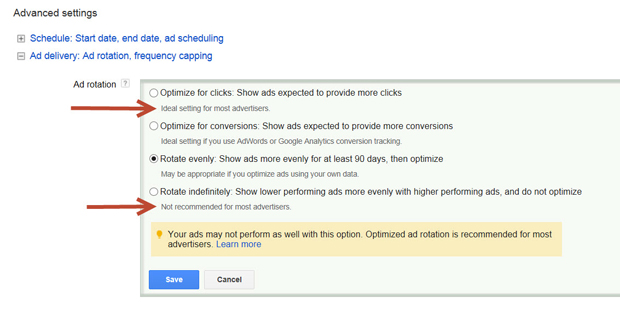 Don’t fall for these roadblocks. Choose “All Features” in campaign settings, and then choose either “rotate evenly” or “rotate indefinitely,” and use conversion data to choose the ads that are achieving your marketing goals.

Geotargeting and language settings are other standard campaign settings that work against you.

One of the good things about PPC is the ability to choose the geolocations in which your ad will display, and the languages searchers will be using. It offers significant control for advertisers.

However, the default location for a standard campaign is the U.S. and Canada, and the default language is both English and French. 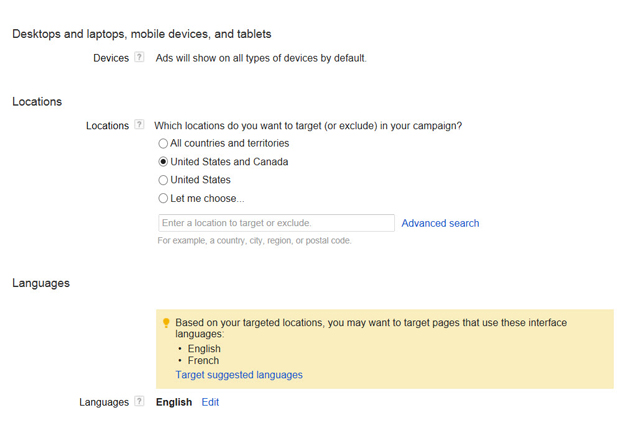 The default locations and languages for standard AdWords campaigns.

If your customers are located in both the U.S. and Canada, this is fine. But many advertisers don’t sell to both countries. In addition, it’s a best practice to create separate campaigns by language. So if you want to target both English and French, you’re better off creating two different campaigns instead of lumping them together like they are by default with standard campaigns.

Change the location to the country you want to target, and choose the appropriate language — either English or French, but not both.

One of the scarier default campaign settings is the bid strategy setting, seen below.

Google wants to set your bids. Have you heard the expression “the fox is guarding the hen house?”

First of all, as mentioned earlier, your goal should not be to maximize clicks — it should be to maximize conversions. Second, why would you trust Google with your money? PPC offers nearly unparalleled control for advertisers — don’t hand it over to Google to manage your bids. Instead, select “I’ll manually set my bids” and decide what makes the most sense for you and your business.

Remember, Google AdWords is an effective way to grow your business. But it’s also the way that Google makes money. By adjusting your campaign settings, you’ll ensure that both you and Google profit from AdWords.