Pinterest generates a lot of social media marketing excitement among brands that have visually attractive products to promote. But to date, Pinterest hasn’t offered as much natural search benefit. Bing’s October integration of Pinterest content into its image search marked a turning point in Pinterest’s value to search engine optimization. Brands have a new opportunity to expand their search result footprint in Bing, by maximizing their Pinterest campaigns.

Bing reports receiving millions of searches a day, nearly 10 percent for images. In the past, Bing relied heavily on image search algorithms and “computer vision” to determine the content and context of those images.

Pinterest takes image search in an entirely different direction, though. Millions of humans voluntarily post, describe and assign value to images on Pinterest by pinning and following. That activity correlates nicely with search engines’ focus on relevance and authority in determining search rankings.

Seen in that light, Bing’s Pinterest integration was a savvy move to add human intelligence to its machine intelligence. It’s extremely difficult for a search engine to determine the content of a visual image, and even more difficult to determine if people will react positively to that image.

Pinterest brings both to the table. Real people liked the images on Pinterest enough to pin them and write a couple of words about them. From there, other people either like the image enough to repin or favorite it, follow the pinner or the board, or took no action because they were unmoved by that image. That data is incredibly valuable to a search engine, whose goal is to provide the most interesting and relevant content to its users.

Earlier in the year, Bing took a small step toward Pinterest by allowing searchers to pin images directly from Bing image search results. Apparently the feature (and the data to which it enabled access) was interesting enough to build upon on both sides.

Enter a search query in Bing Image Search. In the example below, I searched for “blue Christmas wreaths,” and Bing included four relevant Pinterest boards at the right. Each board is represented by three pins from that board. The board’s name is the link text followed by the number of pins on that board and the name of the pinner. 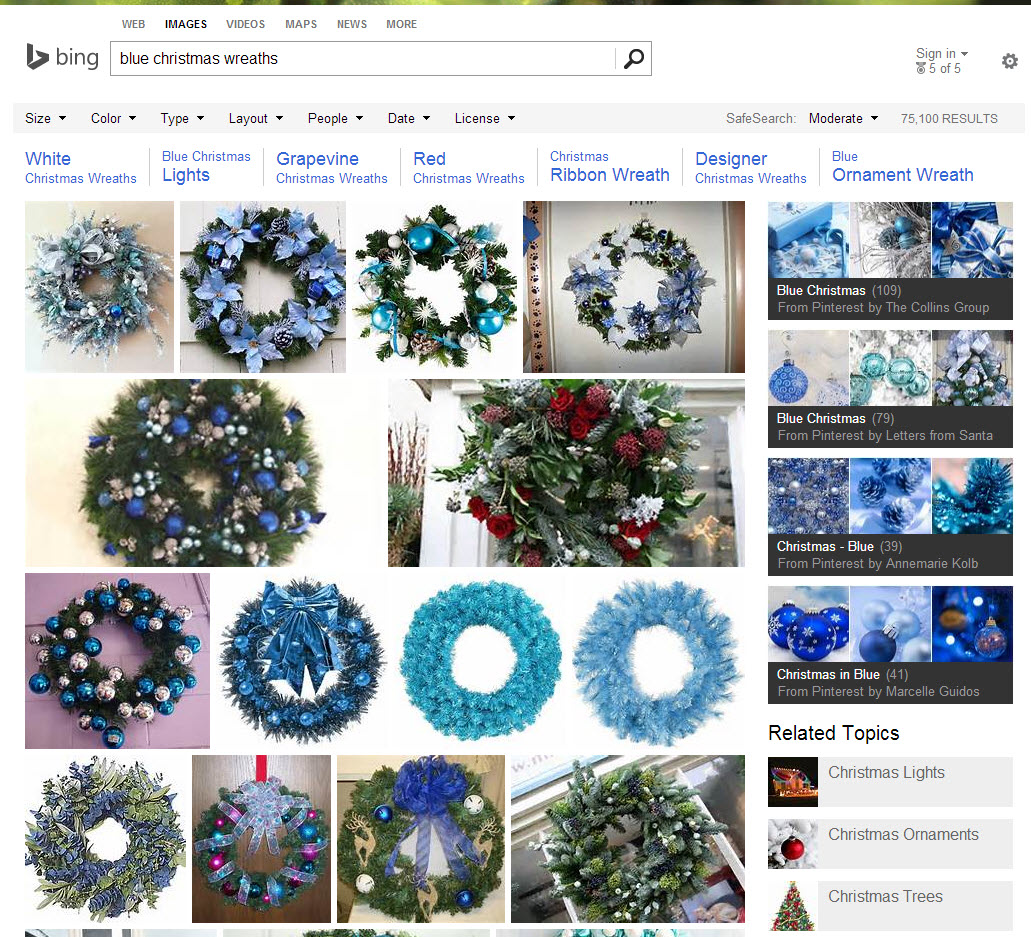 Clicking on one of the featured boards takes you to a second Bing Images page featuring the relevant images from that Pinterest board. In the example below, I clicked the first Pinterest board listed, “Blue Christmas,” to get the following board-specific page. 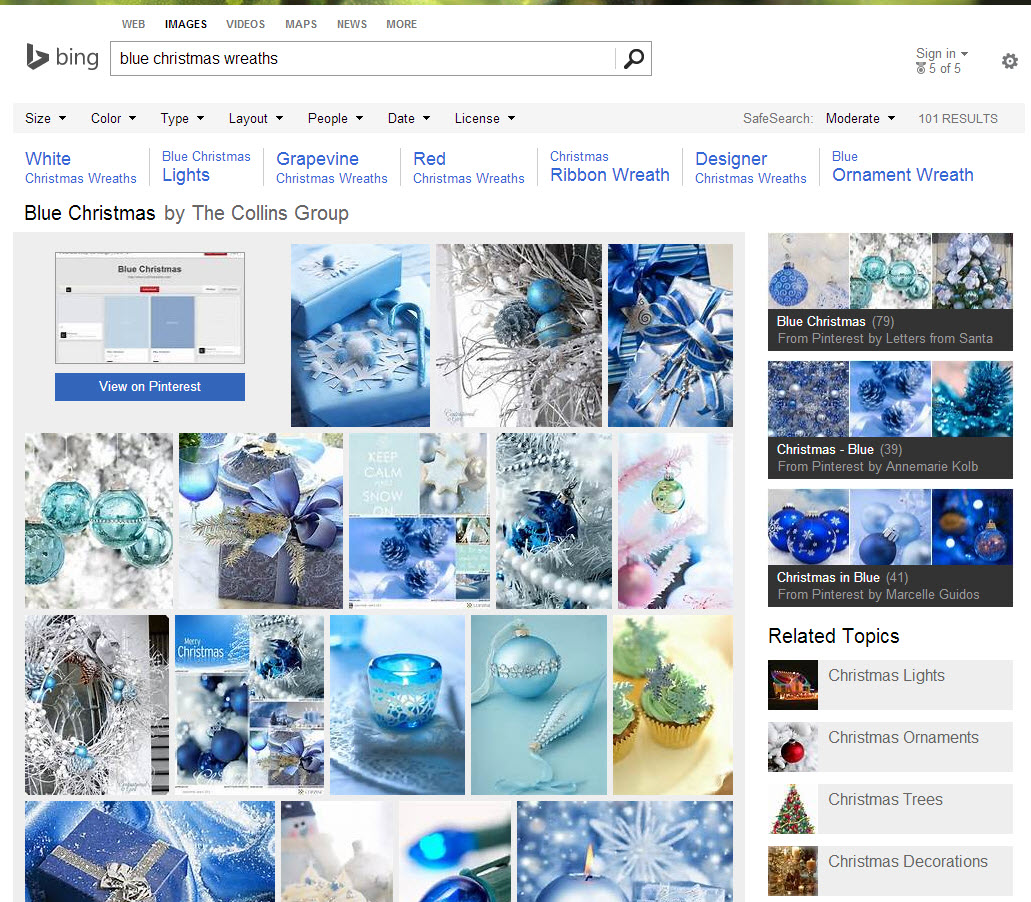 Clicking the “View on Pinterest” link on the upper left of the image results for the board page will finally take you to the featured Pinterest board. Or users can pin the image to a Pinterest board of your choosing from the Bing search results without having to visit Pinterest at all.

The image below is the “Blue Christmas” board on Pinterest. 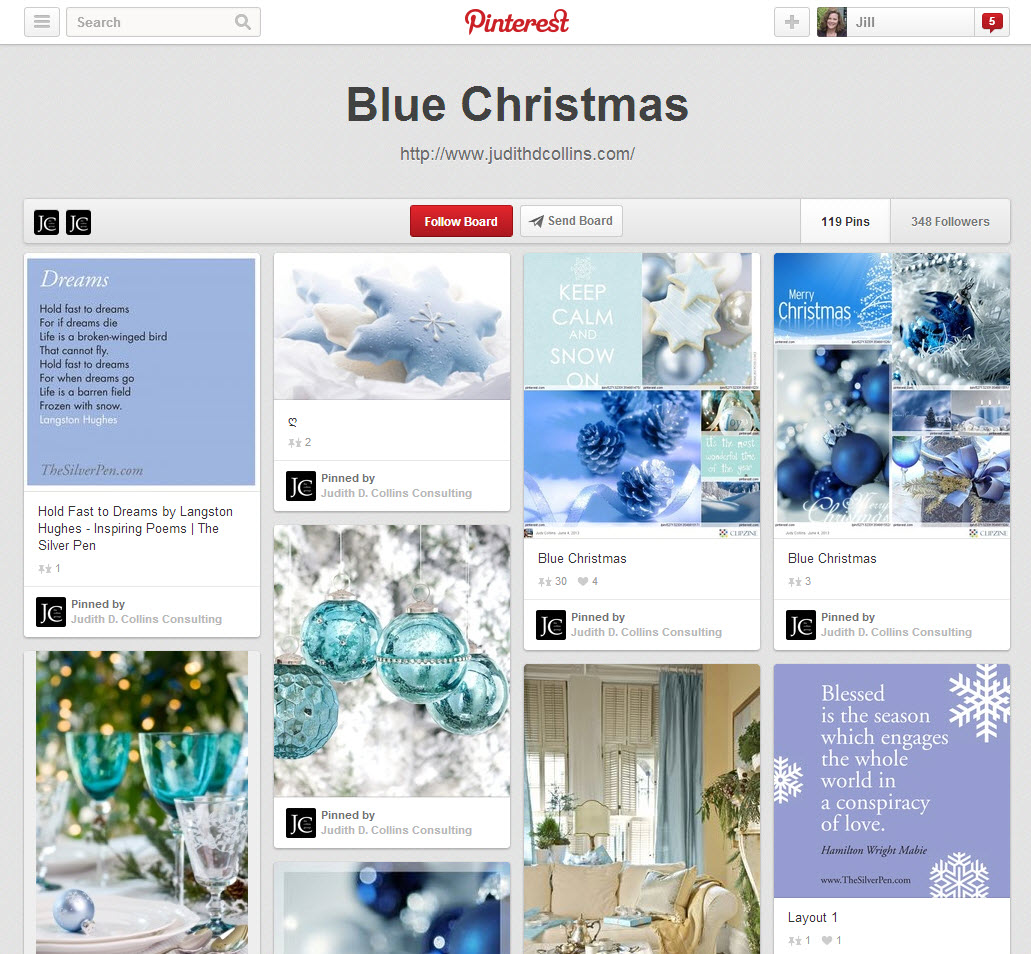 Interestingly, Bing’s search results showed 109 pins on this board, but clicking through to the board on Pinterest shows 119 pins. Bing apparently doesn’t have access to a real-time feed, but how long the delay is I can’t say. As a result it may take a bit of time before the content you pin is accessible to Bing’s Image Search. 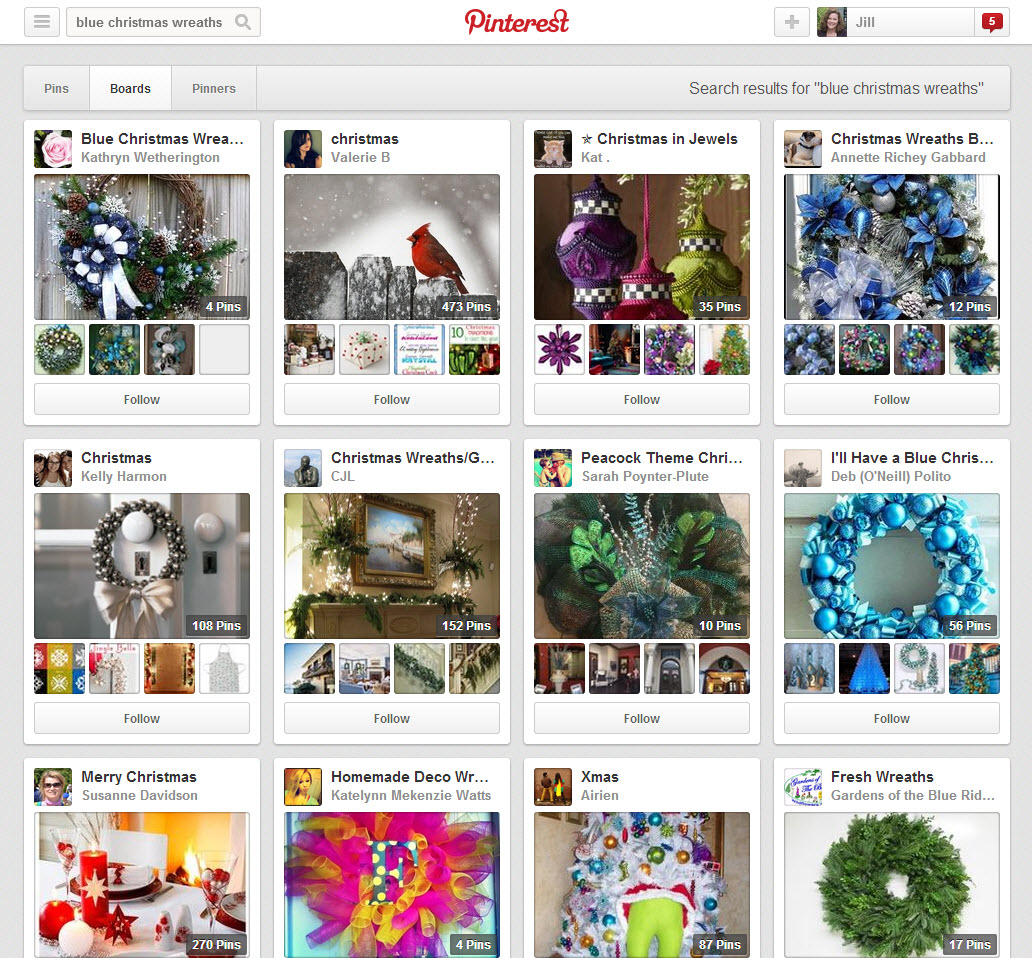 Each of the boards ranking in Pinterest’s internal search with the title “blue Christmas wreaths” had very few pins on it, between one and 12 pins on each, as shown above. Bing would naturally want to choose boards with more pins on them, since they create a search result page that shows all of the pins on the featured board. If only a handful of images are available to show, the result is not very impressive.

You’d expect the answer to be tied to followers as well, as a measure of the board’s or the pinner’s authority and popularity. However, one of the boards Bing chose to feature in the “blue Christmas wreaths” sample search — annemariekolb’s “Christmas – Blue” — only had 31 followers. That’s a small number.

That small number of followers on annemariekolb’s “Christmas – Blue” board illuminates a second point. Pinterest places a meta robots noindex tag on boards with less than 210 followers so that they won’t be crawled and returned in traditional search results. Once a board has approximately 210 followers, Pinterest removes the meta robots noindex tag so that the board can rank in search results. This tactic discourages spam by removing the SEO benefit from boards that don’t meet Pinterest’s criteria for popularity.

So how is Bing able to return annemariekolb’s “Christmas – Blue” board in its image search? Bing’s partnership with Pinterest enables Bing to choose to display any of the boards in Pinterest’s feed without having to obey the robots meta noindex signal that it would encounter if it was trying to crawl Pinterest the old fashioned way. That means Bing factors at least two popular social signals into its search results that Google doesn’t: Facebook and Pinterest.

I’m not sure yet exactly how Bing determines which boards and pins to show, but it comes down to the same things that always matter for image search and Pinterest: relevance of textual signals around the images and authority (follows and shares) of the images, boards, and pinners. We can add to that the new element of quantity of pins on the board, and likely the relevance and authority signals each of those individual pins brings to the board.

Use the words you want to rank for in the descriptions, and do all you can to encourage shares and follows. I’ve addressed Pinterest and SEO here previously, by the way, at “Does Pinterest Help with SEO?.”