If small and mid-sized online retailers cooperated, they may be able to develop a fast and reliable shipping network competitive with what Amazon, Walmart, and other industry-leading merchants can offer.

Online shoppers often expect free and fast shipping. Call it the Amazon Prime effect. To be competitive, mid-market and small retailers need to compete not just on products, customer service, and price, but also on the cost and speed of delivery.

Consider that in 2016 about 88 percent of American consumers surveyed believed free shipping was an important factor for shopping online, according to the Walker Sands “The Future of Retail 2016” report. This sentiment is up from about 80 percent of shoppers in 2014. That is an eight-percentage-point climb in just two years and it means that nearly nine of out ten shoppers may be looking for free delivery when they make an online purchase.

UPS and comScore’s “Pulse of the Online Shopper” 2016 report supports this assertion. Specifically, the report found that one in three respondents buy from marketplace websites like Amazon or Walmart rather than from a small or mid-market retailers because they want fast delivery. Again, the speed and cost of delivery is a significant driver of online sales and store selection.

Amazon and other tier-one retailers have refined their ecommerce order processing and logistics so that they can use fast and free delivery as a competitive advantage. This refinement includes everything from mastering the picking and packing process with equipment and robots to optimizing packaging.

We can think about the relative shipping advantages of these large retailers at a higher level, categorizing the advantages into four areas.

Consider this last category of advantages — facilities — and imagine that you have an online business with a warehouse in Manchester, New Hampshire, ZIP code 03101.

Your store sells fitness equipment and apparel, including some popular yoga pants, which are also available on Amazon Prime. You want to be competitive, so you offer free, two-day shipping, too.

An order comes in from Scottsdale, Arizona, ZIP code 85054. To get your shipment, which weighs about two pounds, to Scottsdale in two days, you choose UPS 2nd Day Air for $38.31. Let’s hope you have some significant margin in those yoga pants.

Now imagine Amazon accepting the same order from a customer in Scottsdale. Amazon has several fulfillment centers in Arizona, including PHX7 at 800 North 75th Avenue, Phoenix, Arizona, 85043, which stocks the same yoga pants.

Amazon ships the identical package via ground for something like $5.00 or less. And the package will arrive in one day, not two.

That is a significant competitive advantage. 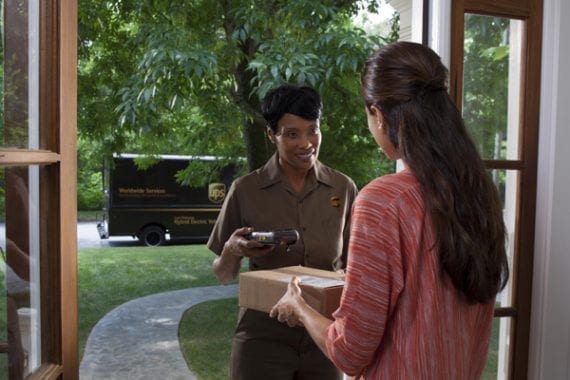 Package carriers like UPS deliver the product your customer orders. They are the last face, if you will, that customers see. So it is unlikely your customers would notice if a “partner” retailer fulfilled for you.

Your “partner” for this order, prints out a label with your store’s address and logo on it; packs up the yoga pants, which it also carries; and sends them to your customer at about the same rate Amazon is paying.

Your cooperative “partner” keeps half of the profit from the sale and your business keeps half, making a bit more than you would have if you had fulfilled the order yourself and paid a lot more for shipping.

This level of cooperation between independent retailers is, at present, unheard of, and for some businesses, the idea is beyond revolutionary. Nonetheless, it has the potential to overcome or negate at least one of the competitive advantages tier-one retailers possess around fulfillment, making mid-market or even small sellers much more competitive.

Any sort of widespread cooperative shipping revolution would have several requirements.

Trust and consequences. Retailers would need to trust each other to provide fast and professional fulfillment and not to steal each other’s customers. There would also need to be consequences for service or ethical failures, even if these were as mild as posting poor ratings of other retailers in the cooperative network.

Affiliation. Retailers may need to be affiliated or associated. For example, many brick-and-click retailers belong to buying groups, like Minnesota-based Mid-States Distributing. These groups could easily work together for ecommerce fulfillment.

Integration. Ecommerce operations would need to be integrated so that orders could be shared programmatically. Shipping software providers like ShipStation, ShipHawk, Shippo, Ordoro, or similar — which already facilitate orders and shipping from multiple warehouses — could easily facilitate the required integration for cooperative fulfillment.

Would this sort of cooperative shipping arrangement — wherein mid-market and small retailers collaborate to create a network of retailers willing to fulfill for each — other really work? Maybe.

What is clear is that fast and free shipping continues to be important, and large retailers possess a competitive advantage in this area. It is also clear that online retailers which sell generally available products may be more impacted, if you will, and that these companies would be wise to take some steps to compete with large retailers on delivery speed and price.

Cooperation is one possible solution.