Editor’s Note: This is part two in our special report on “Video for Ecommerce,” where we describe real stories of online merchants creatively using video to drive sales and grow their brands.

Visitors to RMTracking.com are greeted by a video host, positioned unobtrusively in the lower right of the home page. “Welcome to Rocky Mountain Tracking, a leader in GPS…,” the host begins. He explains the company’s history as a global-positioning-systems reseller, describes its “same-day shipping and great technical support” and offers a virtual tour.

“As any company, we experienced the typical website customer spending just 2, 5 or 10 seconds here before they got bored and moved onto another site,” said RMTracking.com President, Brad Borst, from the company’s Fort Collins, Colo., headquarters. “Video gives them something else to look at. It’s a must for any ecommerce business looking to maintain their attention long enough until they’ve had a chance to look more into the site and your products.”

Meanwhile, a few GPS units are featured in video-like sweep-ins on the left side of the page, including one that shows a 360-degree video view. Below that is a short tower ad, beckoning visitors to watch a Flash movie of the site’s value proposition for fleet managers.

Although some users claim that the talking spokesperson is a distraction, statistical evidence shows just how helpful this sort of online video can be.

“We noticed about a 40 percent increase in sales,” said Borst.

“Video views on retail sites constitute only about 1 percent of the total videos that consumers view online,” said Andrew Lipsman, a senior analyst at research firm comScore. “Even though it’s only 1 percent, you can argue that it’s pretty valuable. It’s not necessarily the volume, but the fact that people are using it. For ecommerce, it’s the beginning of a trend.” 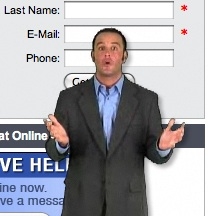 RMTracking.com’s use of a video spokesperson is a growing practice among ecommerce and lead-generation sites. It’s easy to see why: studies show it increases online conversions by as much as 150 percent. This video has a transparent background, and can be configured to walk onto the screen when users take actions ranging from clicking a “play” button to leaving the page.

For RMTracking.com’s video spokesperson, Borst turned to OnsiteVideo.com in Boston, Mass., one of the growing numbers of video-production houses turning out customized spokesperson overlays. Borst provided copy points to OnsiteVideo’s staff, which in turn wrote a script, hired an actor, produced the video and created the code to launch the finished product.

“We probably spent $3,000 for production, and then monthly fees for OnsiteVideos’ hosting,” Borst said. “But the few hundred dollars that we pay monthly is nothing compared to the return on investment.”

In RMTracking.com’s case, clicking the spokesperson sends users to a page that compares many GPS tracking units. Other interactive video producers build in more direct sells. Innovate Media in Costa Mesa, Calif. inserts links directly to product pages. Click on the spokesperson’s bracelet or shirt, and users land on that products’ selling page. “We tested sending 50 percent of Google traffic to a page with this type of spokesperson interactivity, and 50 percent to the same page without it,” said John Cecil, president of Innovate Media. Average conversions were “30 percent higher” with interactivity.

Note that Innovate Media also offers “generic” spokesperson starting at just $19.95. There are even free, non-customizable spokespersons available from such sites as vdoLife.com and HostessVideos.com.

“Video is certainly the way to go to get people more excited about your product online,” said Amanda Schroeder, director of marketing for video-ad-campaign agency EyeWonder in Atlanta, Ga. “People are used to that format within commercials, and they’re more apt to watch something similar online.”