On May 30, Mary Meeker of Kleiner Perkins Caufield & Byers, the venture capital firm, delivered her “Internet Trends 2018” report at the Code Conference in Rancho Palos Verdes, Calif. This report is an annual tradition that is watched closely by the Silicon Valley crowd. She mowed through nearly 300 slides. A few of them relate to pay-per-click advertising and ecommerce.

Ecommerce growth continues. In 2017 U.S. ecommerce sales grew 16 percent over 2016 — exceeding $400 billion. While that is a huge number, it represents just 13 percent of all U.S. retail sales. Thus there is still much remaining growth. 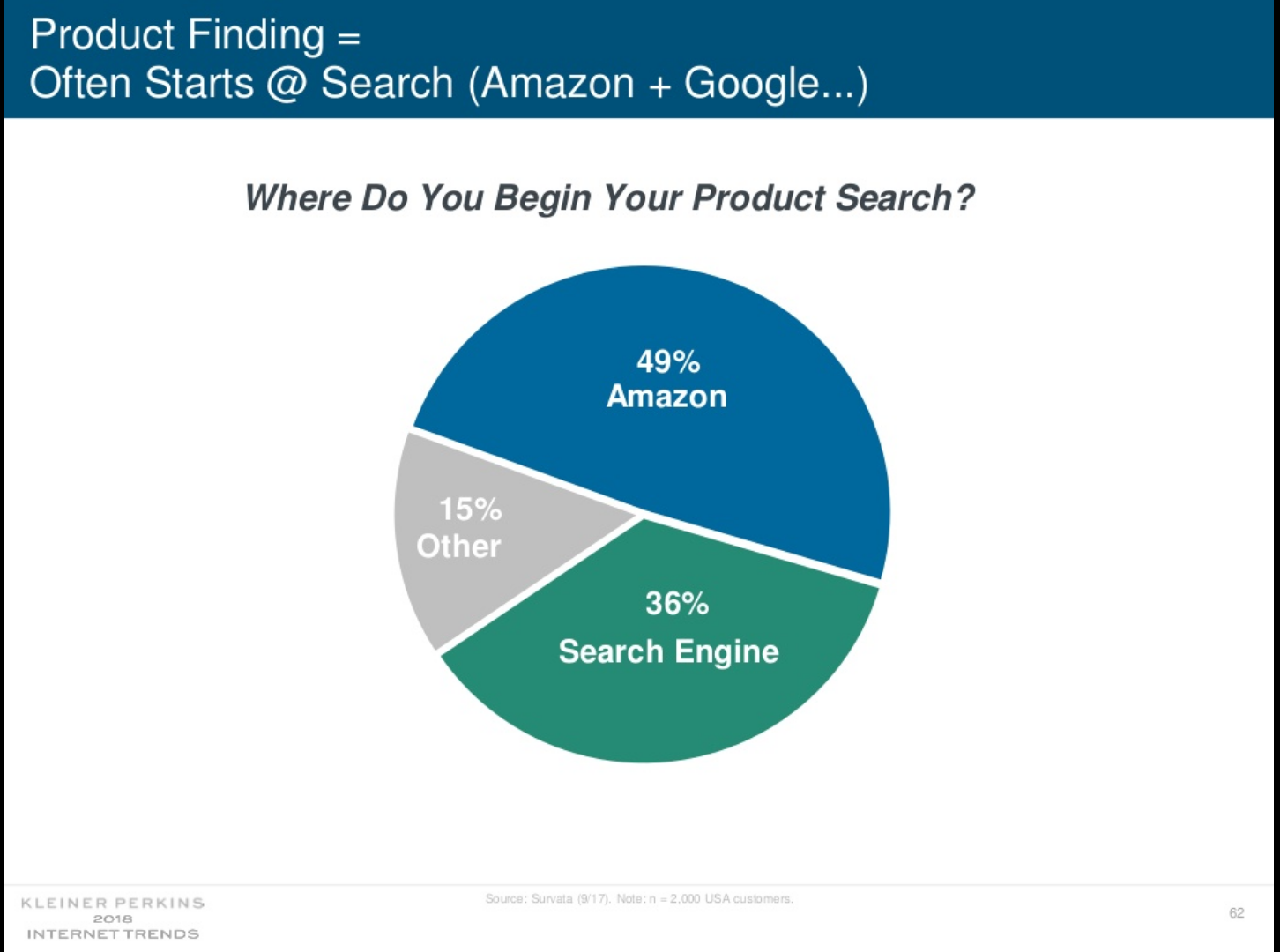 Mobile is taking over. In 2017 the average adult internet user in the U.S. spent 5.9 hours daily with digital media. That’s up from 5.6 hours in 2016. But the more telling statistic is that 3.3 of those hours (over 50 percent) were on mobile devices.

Voice devices. There were roughly 30 million Amazon Echo users in the U.S. by the end of 2017. However, I’m still unconvinced that the user experience of voice assistants can facilitate most online transactions. It may be possible for repeat purchases of consumable items. But online purchases often include multiple touch points that can’t be easily accomplished in a voice-controlled experience (without driving the user batty).

The privacy paradox. Online shopping is becoming more personalized. And personalization requires data. However, with the implementation of the E.U.’s General Data Protection Regulation and the publicity surrounding the Facebook data scandal, consumers are wary of data collection. This places ecommerce merchants in a dilemma: they want to provide personalized shopping experiences, but they can’t use shoppers’ data.

Advertise on Amazon. Knowing that 49 percent of U.S. product searches start on Amazon is a compelling reason to sell and advertise there. There are many helpful articles on Practical Ecommerce about selling on Amazon, such as this one.

In 2017, Amazon recorded roughly $4 billion in advertising revenue, a 42 percent increase over 2016. It seems like a double whammy to pay the Amazon fees and pay for advertising. But compare the cost per acquisition to other ad channels to determine if it’s right for your company.

I’ve worked with two companies that started advertising on Amazon this year. Both have seen equivalent or better CPAs through Amazon advertising versus other channels. 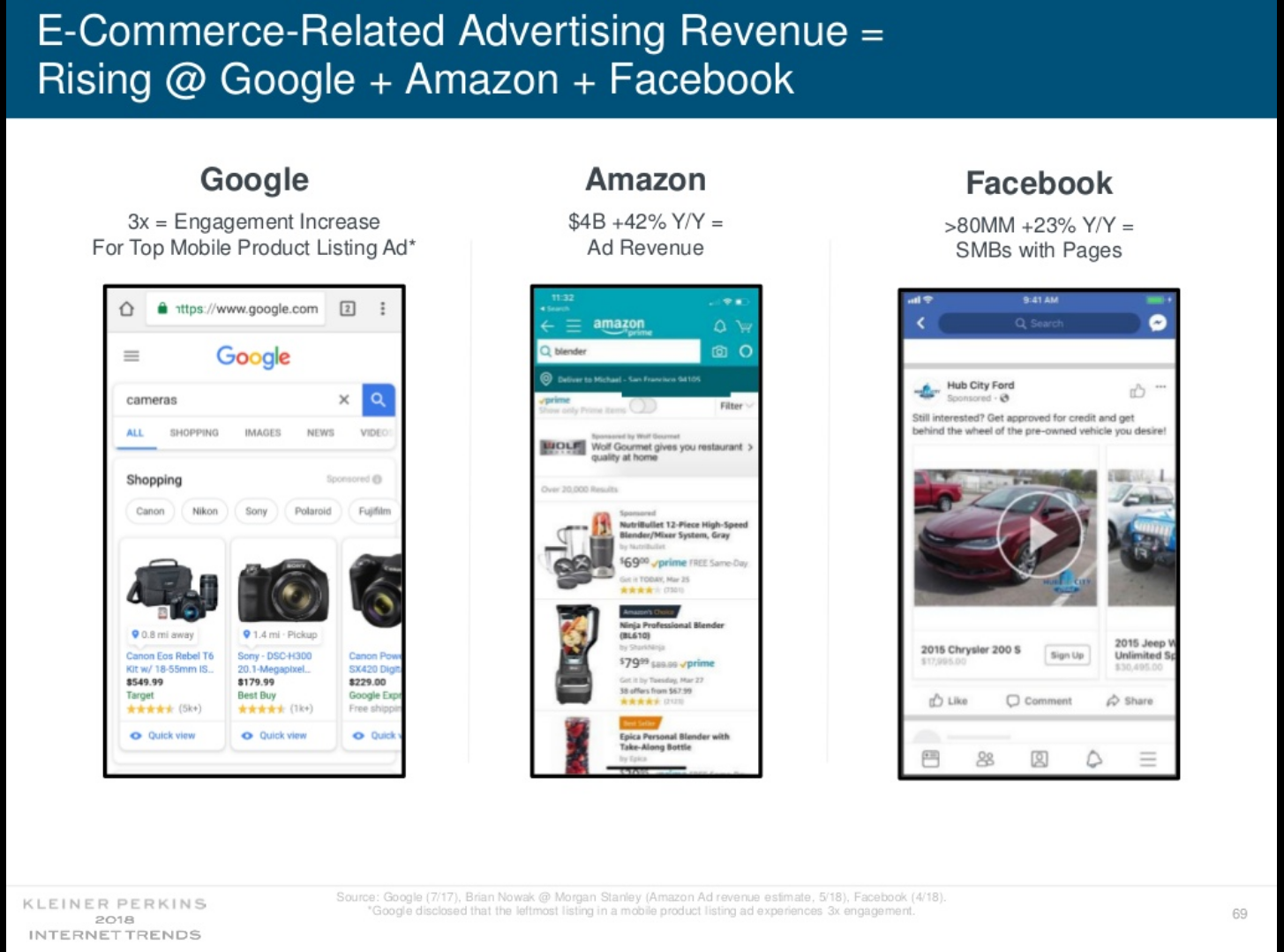 Slide 69 from Kleiner Perkins Caufield & Byers’ Internet Trends 2018 report shows the growth in ecommerce-related advertising on each of Google, Amazon, and Facebook. Click image to enlarge.

Offer easy mobile payment options. More than half of U.S. internet users are on mobile devices. They see ads for products. They browse online stores. They should be able to (easily) pay for the products on their mobile device as well. If you require mobile users to complete long payment forms and manually enter credit card numbers, you’re missing out on sales.

Use social media to introduce products and drive sales. Seventy-eight percent of Facebook users aged 18-34 have discovered a product on that site, according to Meeker’s report. For Instagram and Pinterest users, it’s 59 percent. This is the millennial generation (birth years from the 1980s to roughly 2000), which is larger than the Boomers (early 1940s to early 1960s) and Generation X (early 1960s to early 1980s).

Even more powerful, 55 percent of consumers aged 18-65 purchased a product online after they discovered it on social media.

If you’re not using social media as a top-of-funnel activity to introduce your products to potential customers, you’re missing a huge opportunity. And, remember, half the world’s population — 3.6 billion — uses the internet. 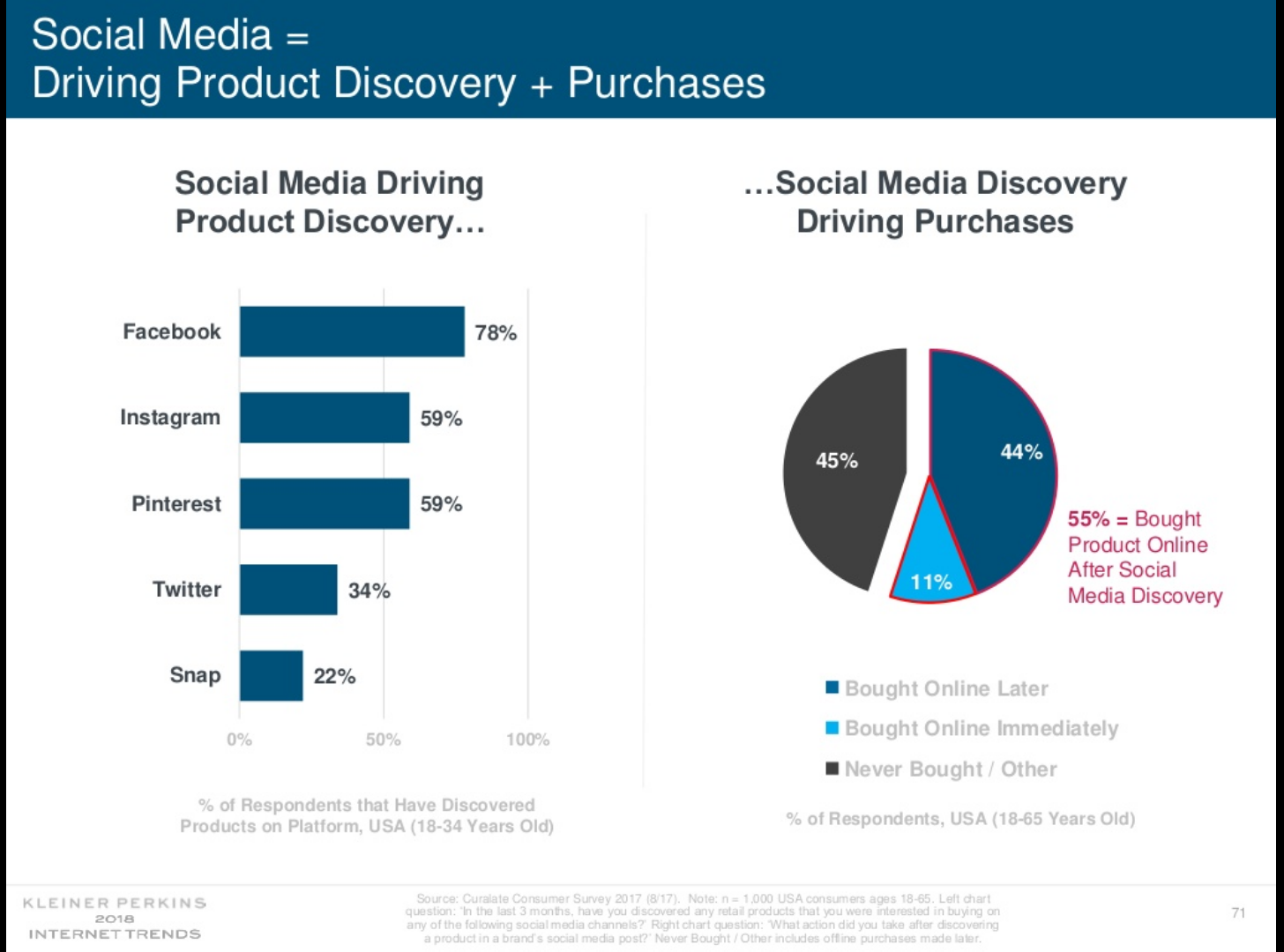