Headlines are something writers and editors agonize over, and for good reason. Copywriter coach Chris Marlow writes “tests have proven many times that the headline is responsible for at least 50 percent and as much as 75 percent of an ad’s success.” Some sources report that 35 percent of email subscribers will open an email based on the subject line alone, which almost seems low compared to the headline statistic.

Statistics aside, with so much riding on subject lines, it’s worthwhile review how to improve them. Here are seven ideas, in order of how well they’ve performed previously.

Subject lines with 6 to 10 words produce the best open rate. That’s according to a study put out by Retention Science, a personalization platform, in early March of this year. Retention Science pulled its results from over 260 million emails sent via 540 different campaigns. 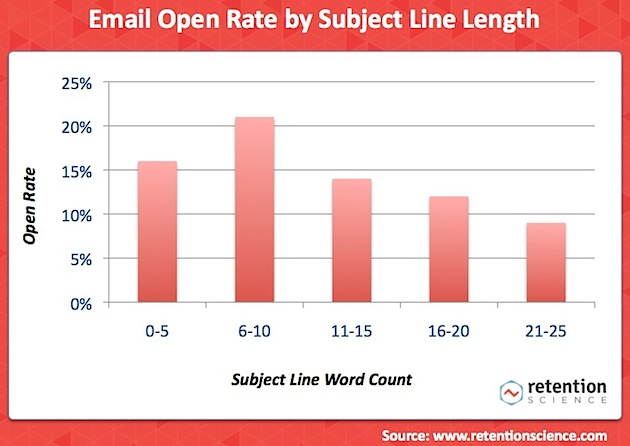 2. Personalization Is Worth the Effort

Experian (a data provider) and MailerMailer and MailChimp (two email service providers) have done studies in the last year that showed personalized subject lines get up to 22.3 percent more opens than emails without personalization. Given how many email opt-in forms ask for at least the first name in addition to the email address, it’s surprising that only 30 percent of brands actually end up using that personalization data.

3. Use the Right Words

MailChimp and Adestra, a digital marketing firm, have put out valuable research about which words do best — and worst — in email subject lines. The best words to use include “urgent,” “announcement,” and “freebie” (which beat out “free” by nearly tenfold), according to MailChimp. Adestra gave “alert,” “daily,” and “free delivery” high points.

MailChimp recommends avoiding “Help,” “Percent off,” and “Reminder.” Adestra found a 18.7 percent fall off in clicks when the word “newsletter” was in the subject line.

Also remember to avoid spam trigger words. They can change over time, though HubSpot recently named “Cash,” “Quote,” and “Save” as spam offenders. Finally, remember that all the data about “best” and “worst” words to use is based on generalities across billions of emails. It’s a rule of thumb, not the law.

These next four best practices generally get good results, but they are not as backed up with the definitive quantitative research that the earlier best practices had. These tips will likely help your subject lines, but always measure and test to be sure.

Just like headlines, order buttons, and pretty much anything else in marketing copywriting, calls-to-action work. Use them.

Emails with vague subject lines get deleted. Think of yourself as you plow through an inbox with several hundred email messages. Anything non-essential and vague gets culled fast.

Both MailChimp and Madison Logic, a personalization platform, report that capitalizing the first letter of each word will give a small but significant lift.

Restrain your inner grammarian if you have to; leave the punctuation out.

Those seven practices are helpful, but, as mentioned, they’re a rule of thumb. They may or may not work the same for your list every time. The only real way to know is to test.

Fortunately, there’s a lot of information available about how to test subject lines. Most email service providers even provide A/B split-testing functionality for subject line. That’s good, but there’s the issue of statistical relevance lurking around behind those reports.

Let’s start with some basic figures.

Splitting a list in half is an acceptable way to do a subject line test, but it doesn’t lend much in terms of results. With a split list, half your subscribers will have received the loser headline, and half the winning one. And, you won’t know which subject line is the winner or loser until you’ve sent the email.

You do get a small lift from the winning half, but ideally you would have wanted to mail the entire list the winning headline. With a split list, you’ve kind of lost half your gain.

A Guerrilla Method to Test Subject Lines for Small Lists

Statistically-valid subject line test require, by some estimates, up to 8,000 subscribers. What if you don’t have that many? There’s still a way to test. Remember how emails with 6 to 10 words in the subject lines get the highest open rates? Now, guess which very popular ad format fits six to ten words? Google AdWords. 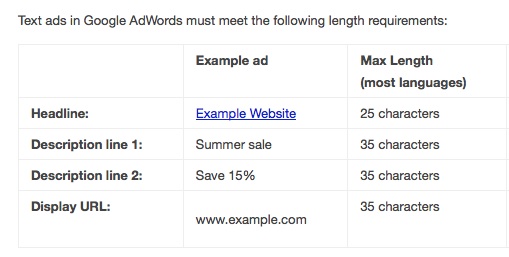 An email marketer who could afford some pay-per-click advertising in Google AdWords (or Bing, or maybe even Facebook ads) could test its headlines in that format, find the winner, and then roll it out in the email subject line.

It would take about 300 clicks to pick the winner between two pay-per-click ads with a 2.2 percent and 2.64 percent click through rate. That’s with the same 20 percent lift we were using for the sample sizes.

Sure, this adds an extra step of work to every campaign. And it would cost $300 for each test if you’re paying even $1 per click on AdWords. But what’s a 20 percent lift to your email sales worth to you?