Rick Pura just finished writing the software code for “Rick’s Search Engine.” He thinks it works pretty well, and he may go into the search engine business. He knows he can write good software; it was he and Keith Waters who engineered the database and system that powers the best-used-book portal on the Internet. Then again, Pura may do something else with his time. To be sure, however, it won’t be government work.

“Never Do Government Work Again” was the motto of two IT “database guys” who decided to go into a rather obscure business 11 years ago. Pura and Waters were IT consultants under contract to the provincial government of British Columbia, Canada. Water’s wife owned a bookstore, which she loved. When Pura and his wife would visit the Puras over coffee or a meal, the subject of the bookstore would inevitably come up. Those conversations were the catalyst in setting in motion a journey whereby the two couples would create and build the largest single book-marketing entity in the world. Not long ago, the two couples checked out of the day-to-day operations of Advanced Book Exchange, or Abebooks.com. They left behind a company that now facilitates the sale and exchange of up to 25,000 books every day. 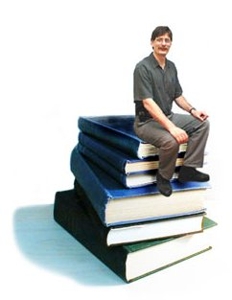 PURA: Keith and I would talk at coffee or lunch, and I would ask about the bookstore, how it was doing and so on. I was curious about how the business worked. One day he said they had gotten into the mail order thing and his wife had run an ad in her little ABE publication for rare and hard to find books. She was looking for a J.D. Salinger and had made a mistake in how she worded the criteria. They started getting mail, sacks of mail every day. We had it all sorted and Keith was saying, “We don’t want to ruin our reputation by ignoring the inquiries. We’re going to have to answer them all.” Just then our son walked in and the wind blew through the door, scattering the sorted mail. Keith’s wife started to cry. I looked at Keith and said, “Isn’t there a database for this kind of stuff?”

The question launched them on a search to see what was offered in the world of used books. Interloc (now Alibris was the only business they could find, and they were doing it with 800 numbers. It was 1995, a time when the Internet was being recognized as a new frontier for ecommerce. Two guys who knew a thing or two about networks and databases decided that the Internet, a network already in place and free to use, was the vehicle that could carry their idea. They decided to develop a database system that would allow booksellers to have a central repository where people could find the rare and used books they wanted.

PURA: We hated doing government work and here was this incredible network called the Internet. Then we asked, “How big is the used-book business?” We tried looking it up, but we could not find numbers. We looked up “books” in general, but that included new books. We couldn’t find that intersection on used books. So, we started doing the back-of-the-napkin thing. Well, how many bookstores are there in Victoria? Then we multiplied it out, and we came up with an industry that measured in the low billions. I said to Keith, “If a billion dollar company set up their headquarters across the street and they had no computers, would you knock on their door?” Well, yeah.

So we said, “Let’s give this a shot.” And the motto was, “Never work for government again.” We had it figured that if we could get to 500 bookstores we could live in Victoria and make American dollars which was good then because the Canadian dollar was in freefall. So, OK let’s go. We started building it in our spare time, we used FoxPro because it was cheap and Keith already knew it (I had to learn it but that was OK). When we got enough of it together, working and tested that it might be useful we asked, “When’s the next book fair?”

The Puras journeyed down the coast to Burbank, Calif., in May of 1996 to show off their big, used-book search engine and virtual- book brokerage at one of the biggest book fairs in the business. Expectations were high, based on what they thought they knew about the market’s thirst for a system of locating used and rare books.

PURA: We thought we would get 1,000 orders. We got one. There was a lot of interest, but everyone wanted to go away and think about it. Then we had to give the service away. It was sort of like a dating club, but when you tell someone that when they go in they will be the only one in there, that’s not much of an incentive. We gave it away until we had enough buyers and enough sellers that it reached critical mass. That took almost two years. We lived off the travails of our working wives in the meantime. But, it worked and so here we are.

For a couple of programmers who dealt daily in writing code and solving very technical issues, the move to start an Internet business that would eventually change the way used books were bought and sold was, to say the least, a bit out of character.

PURA: Ohhh, we didn’t know what we were doing. Let’s be honest. We had not run businesses before; I mean we had body-shopped ourselves around town to get consulting work, but nothing like this. I remember our first business plan. It had five bullet points and the first one was buy a computer. Frankly, I was surprised that there weren’t more people who tried to do what we did, I’m still surprised by the fact we were the only ones.

The potential clientele were booksellers, primarily those who dealt in rare and used books and who needed to let the world know what they had in their inventory or for what their own clients were looking. The Abebooks.com model, a fantastic portrait of simple business modeling, did just that. The key, of course, was a powerful search device built into the site that allows people to find exactly what they want. But, there needed to be inventory in the database.

PURA: It doesn’t make much sense searching an empty database. So, we needed inventory. We went to the booksellers. It happens that there was enough bookseller-to-bookseller interest that it got us going. There is a tremendous amount of activity between sellers (usually on behalf of clients). We went to the booksellers conventions, and we passed out our brochures and sent them off to whatever lists of booksellers we could find. And, word of mouth spread on the Internet fairly quickly. There was also, in those days, a fair amount of pent-up demand for used books. There were, for example, people who had spent years trying to fill in a series of books and suddenly, within hours, they could find what they had been looking for. Book collectors are a small and very communicative group, and the word spread pretty fast.

The revenue streams for Abebooks.com come from fees charged to the sellers who use the database, a commission for each book sold and now from credit-card processing fees. Arriving at the current revenue model, however, was a slow process. Early on, the bookkeeping alone from the simple subscriber fees was overwhelming. The group also found themselves pioneers in some of their activities.

PURA: There was a point where we wanted to get into the business of taking credit card transactions, so we went down to the bank to see what was doable. We did our best suits and ties and all of that. They thought we looked pretty solid and we had good numbers so they said they could work with us. I said, “Let’s be clear, we will be able to take credit-card charges?” They said “yes.” I said, “Over the Internet?” And they said, “Oh no, we can’t do that at all.” Of course, a couple of years later they were back looking for our business.

The Waters and the Puras had started the company thinking it would be a two-man ship. The international used-book aficionados came to love and depend on Abebooks.com to fill their needs. Still, it was nearly two years before either of the founders drew a paycheck, but that didn’t seem to matter. They had tapped into something big, and were in for the long haul.

PURA: The biggest issue we faced was a space issue. We kept growing, and we kept changing offices. We could never figure out how much space we needed. Here we had started out thinking we were a two-man biz. Then we were at 15 and 20 and asking ourselves, “What?s going on.” Finally, we took over some warehouse and converted that into offices. Then we reached that point that a lot of companies reach ? that magic number, 50, 75 people and things start to change. Things get a little less personal and a little more corporate. It’s a time when real management skill has to kick, and I had to learn that on the fly.

When the company reached that “corporate” plateau, things began to change for the Puras and the Waters. They were certainly very successful both professionally and financially. The burnout factor came into play and Pura admits there came a time when he needed to move on. Waters stayed on for a while running the company’s systems department, but later left.

For Rick Pura the past 12 years have been an adventure he would gladly repeat. He would do little differently. For friends, other couples seeking to repeat the Abebooks story in their own lives, Pura has some specific advice.

PURA: First, make sure you all have the same goals. Sometimes people want to do different things, like one wants to build it and sell, and one wants to run it forever and another says let’s do art and Pez Dispensers. Another says they just want to work 30 hours a week and they hate Pez Dispensers. You have to make sure everyone is on the same page. Have a business plan, but don’t overdo it. Just have a basic plan for what your goals are and where you’re going to be in a certain timeframe and have something you can measure against. A couple of pages is fine, just know where you’re headed. Finally, be prepared, because it is going to take a lot longer and a lot harder work than you can imagine. Just assume there will be the 100-hour weeks with no end in sight until it (the end) is on top of you.

Abebooks.com celebrates its 10th anniversary this year. The company is still based in Victoria, British Columbia, Canada. There are offices in the U.S., Germany and Spain. More than 13,500 booksellers from 53 countries list inventory on the site and more than 1,000 books are bought and sold every hour. Sellers enter about 200,000 titles into the database every day and there are 80 million books in the inventory. It’s all virtual; Abebooks never sees or stocks a single book, and the transactions are between buyer and seller. Book lovers conduct more than three million searches on the site every day. This past year the portal was involved in transactions totaling more than $150 million. Some of the sales are quite astounding.

PURA: A copy of Harry Potter and the Philosopher’s Stone by JK Rowling sold for $36,059. It was a 1997 first edition of Rowling’s debut book. Only 500 were printed. It was purchased by a buyer in California from a bookseller in France. But the biggest single transaction we had was for a first edition of J.R.R. Tolkien’s The Hobbit. That one went through at $65,000. A collector in Arizona bought it from a New York bookseller. Not bad when you’re working commission.