You may have missed the blog post from AdWords on March 17 about the expansion of close variants. The second paragraph of that post reads, in part:

… over the coming months we’re expanding close variant matching to include additional rewording and reordering for exact match keywords.

I was surprised that AdWords used the phrase “close variants” to describe exact match. Sure enough, AdWords indeed intends to change the way that exact match behaves. It will do that in two ways: function words and reordering.

Function words include, as examples: in, to, a, the, for, and but. They can be prepositions, articles, or conjunctions.

AdWords can now ignore so-called “function words” in a query. Source: Inside AdWords.

AdWords calls this “rewording” and states that “this should only happen when it won’t change the meaning of your keyword.”

The second way that AdWords can apply close variant matching is through reordering. Thus, someone searching for “size 13 men’s loafers” could see an ad from the keyword phrase “men’s loafers size 13” since it’s the same words, but a different order. Again, this should only happen when intent isn’t changed by having the words in a different order.

Exact Is Not Exact

Initially this seemed like a terrible idea. It reeked of a money grab by AdWords.

In fact, there is a good chance this will increase revenue for AdWords because roughly 15 percent of search queries on Google are unique — they haven’t been used in the previous six months. With unique queries, it’s unlikely that an advertiser would have added those keywords to its account, since the queries would not have shown up in search query reports and keyword tools. Now Google has more latitude to match keywords, even exact match, to these types of searches.

When AdWords launched close variants, it applied to broad match keywords and allowed AdWords to match singular-plural variations as well as misspellings. There were a few issues where plurals had different meanings, but all in all it simplified keyword build-out. And sophisticated advertisers still had exact match to fall back on when precision was paramount.

However, that precision is going away.

In Machines We Trust

The biggest takeaway here is that AdWords is doubling down on its machine learning and artificial intelligence capabilities. The March 17 blog post uses the word “meaning” five times. Each instance is a reassurance that these changes won’t affect the intent — the quality of a click to an advertiser.

With Google handling trillions of queries each year, this puts a lot of faith (and potential revenue) at the discretion of machines to determine how much a query can change before intent does. According to Google, ”Early tests show advertisers may see up to 3% more exact match clicks on average while maintaining comparable click-through and conversion rates.”

Advertisers that have well-structured accounts and thorough keyword lists will need to be diligent. This is unlikely to affect overall click or impression volume because modified broad match and broad match keywords have likely been picking up these close variants already. But it presents an issue with bidding.

Exact match is often used when a query is known to have a good return on investment so that a higher bid can be applied. Phrase, modified broad match, and broad match have progressively lower bids as they become less precise and more exploratory in nature. By adding close variants to exact match, some of these less valuable queries could end up getting exact match level bids — i.e., more expensive — and that will hurt ROI.

The good news is that phrase match keywords are not included in the update. So you can use that match type to force word order and the inclusion, exclusion, and matching of function words.

Who would have guessed that phrase match could help control-obsessed pay-per-click folks? Definitely not me.

My biggest complaint with the update is that the burden of determining relevance just shifted from AdWords to advertisers.

Before, AdWords had to do the work of finding an appropriate keyword in an advertiser account before showing an ad. Now, AdWords only has to find a keyword that it determines to have similar meaning before showing an ad, and that keyword can be exact match if it’s close enough.

So advertisers will need to review their search queries more often and run filters looking for “Exact (close variant).” 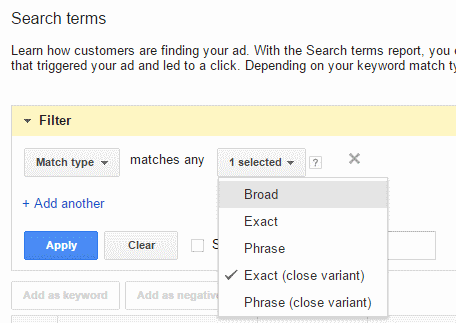 And advertisers should pay attention to what queries are being mapped to what keywords. You may have to add negative keywords at the ad group level to push certain queries away from your high-bid exact matches to lower-bid modified broad or phrase match.