Add Social Media to Your Site with Google Friend Connect

People want to be social on the web, whether it is to share things about themselves through a personal profile or to discover other people with similar interests. It’s also a great way to attract traffic that is focused on a specific topic or set of topics. What’s been difficult for many websites that could benefit from such interaction (and we’ll talk about why that includes ecommerce sites) is the amount of development it takes to implement something like that.

To that end, many ecommerce sites have been leveraging external social media sites. It’s not unusual to see even small websites with a presence on MySpace or a fan page on Facebook. But what if a website wants to offer interaction on their own site? Google Friend Connect – the much-anticipated social media “plugin” for websites – has been made available to the public. Unlike Facebook or MySpace, this platform allows one to add social media interaction to just about any website with just an added snippet of code.

Users of any site implementing Google Friend Connect can view, browse, invite, and interact with others, including existing friends who are registered members of social sites like Facebook, Google Talk, Orkut, and Plaxo.

• No programming whatsoever – just copy and paste a few snippets of code into your site, and Friend Connect does the rest.
• Enrich a site by engaging social features from a catalog of gadgets by Google and the OpenSocial developer community.
• Attract more visitors by having users invite friends from social networks and contact lists to visit and join your site.

So how exactly does this apply to ecommerce sites? Any site, whether it’s selling apples or xylophones, can create a community around its focus, allowing visitors with similar interests to meet, not at some outside web address, but right in the thick of the ecommerce site. If well done, these sorts of meeting grounds grow naturally and attract more people who have similar interests, not only by way of direct discovery, but also though personal reference via Google Friend Connect’s built-in interaction with outside social media entities such as Facebook.

The ecommerce site itself can also become involved in the dialogue, whether it is through answering questions, commenting on conversations, or even leading conversations to new places. Google Friend Connect eliminates the need for users to jump from the mega social media site to the corporate site in order for a transaction to occur. In other words, it affords everything that a company might go to a “mega” social media site for right on the home page (or any other page) of that company’s website. 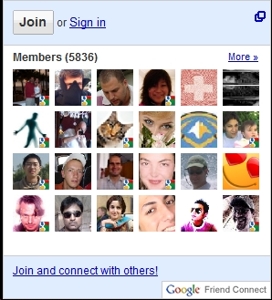 The lava lamp site is a very simple example. There are a myriad of ways an ecommerce site can integrate Google Friend Connect to take advantage of the gathering tendency we humans have. The key, however, is to leave ownership of the community to those who are attracted to it. While occasional shepherding is fine, and the occasional seeding of conversations (perhaps pointing out a product relative to that conversation) is acceptable, using the social media interface as a platform for the hard sell will simply drive people away and earn a bad reputation for the website. As it is with all social media, an interface sponsored on a corporate website should largely be allowed to define itself. If you build it, they will come, and eventually, they will buy.