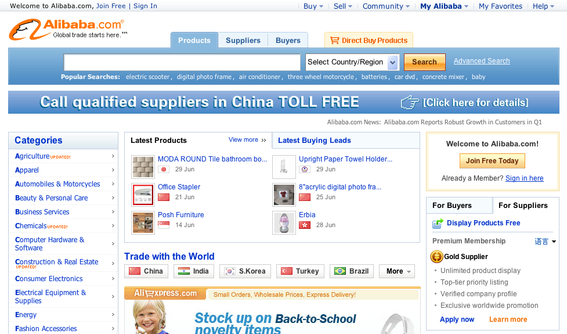 Alibaba is a huge force in global, business-to-business ecommerce. The company is based in China and it links millions of wholesale suppliers with businesses that resell those products. The company has allocated $100 million to invest in U.S. ecommerce-related businesses and today, it announced the first such investment in acquiring Vendio, the U.S.-based ecommerce platform. Joining us to discuss that acquisition, Alibaba generally, and the future of ecommerce is David Wei, chief executive officer and executive director of Alibaba.

Practical eCommerce: Tell us about your company, Alibaba, and the services it provides.

David Wei: “Alibaba was founded in 1999 by Jack Ma, an English teacher. The business has been designed to help small businesses, and we built the largest business-to-business wholesale online marketing since 1999. We have the largest supply base in China and in Asia–probably in the world–to make life easier for traders, online retailers, offline traditional pop-and-mom shops, hotel owners, all kinds of small business; to make their work easier, to make efficiency in their sourcing and to help them put a margin.

“The company is 40 percent invested by Yahoo!, 30 percent invested by Softbank, and the management (we) owned the rest of the shares. We were a small business ourselves in 1999 with only $50,000 U.S. capital to start with, and18 people working with Jack. Now, we have 18,000 people working globally. Alibaba.com became a public company in 2007 and its market cap is over $13 billion today.

We launched the new platform, AliExpress.com, in April, to fit even smaller wholesalers, like your audience. This is a more transactional platform. People can buy wholesale, small quantities of consumer products to complete their ecommerce supply chain. In other words, we find most of our traders and buyers buying online and selling offline, and about 80 percent of U.S. online merchants actually sell online but resource offline. So, very few people enjoy the full online wholesale and online retail experience. That is why we are buying Vendio, to make the first model in the world a complete online business-to-business to consumer model.”

PEC: How many suppliers work with Alibaba?

PEC: Are they China-based suppliers?

PEC: Why did Alibaba purchase Vendio?

Wei: “Vendio supports over 80,000 small and medium online retailers in the States, and the U.S. from day one has been a very important market to Alibaba.com. Those 80,000 retailers are generating over $2 billion U.S. worth of GMB every year, but most of them have a sourcing issue to be solved, and we believe there will be great synergy for us to provide unique and exclusive offers to Vendio-supported merchants, and then Vendio merchants can continue to offer the value back to U.S. consumers. So, it’s a win-win-win—U.S. consumer win, U.S. merchants supported by Vendio win, and our factories based in Asia will have a direct access to the US markets.”

PEC: Why Vendio, as opposed to another platform?

Wei: “Vendio is one of very few that offer a multi-channel solution for retailers, which we believe is the future for small online retailers; not relying on just one platform, but diversifying their channels to as many areas as possible. And, of course, we like Vendio’s management team, which has been there since day one. Its technology also impressed us a lot. Vendio is the right size to kick off our $100 million U.S. investment for AliExpress.com.”

PEC: How much of that $100 million went to Vendio?

Wei: “Well, we don’t disclose the financial terms, but what I can say is the Vendio acquisition is portion of the $100 million budget, which I haven’t spent yet.”

PEC: What other types of businesses would interest Alibaba as you expand with that $100 million investment? Specifically, does Yahoo! Small Business (YSB) platform interest Alibaba?

Wei: “[Yahoo!] Merchant Solutions under YSB also provides very a similar business, but we like multi-channel better than single channel solutions, and also we want to have a more flexible technology we can easily integrate.”

PEC: What do you predict for the future of ecommerce?

Wei: “Online retail business in the States is just taking off with double-digit growth year-on-year, even during the financial crisis, and taking monthly share from offline retail. So, I think there would be plenty of room for different vendors to grow including very unique verticals. If there is a differentiated value proposition for each vendor, there should be enough room for them to boom in the U.S. online ecommerce community.”

PEC: What’s your view on the future of Facebook, Twitter, other social sites as it relates to the ecommerce business?

Wei: “I don’t think it will be a very easy job for those social community sites to convert into ecommerce, because people’s social relationships are sometimes a little bit far away from the commercial relationship. It’s good for word of mouth to recommend something to your friends, but it cannot be too commercial; otherwise, it will dilute the social nature of these communities.

“I think they will remain very strong positions as a social media community, but I doubt they can be converted into a commercial community. If you put too many ads in those social communities, then people will probably change their minds whether they should continue with the relationship.”

PEC: Are you skeptical about the opportunities for ecommerce merchants to use social media sites to sell products?

PEC: What advice do you have for smaller ecommerce merchants?

Wei: Well, number one, we believe [there are great benefits] from sourcing, not from how great sale-SKUs or marketing-SKUs you have. Everything starts with sourcing.

“Number two, small businesses should try as many [sales] channels as they can afford. Don’t put all your eggs in one basket.

“Number three, a safe and secure trading environment is very important. Try to use an escrow service as much as possible rather than just credit cards or direct payments. Because the working capital for a small business is very small, most businesses suck because the first payment never comes back for any reasonable products or return. Alibaba.com and AliExpress.com have a variety of sourcing opportunities to reduce the cost, improve the margin and differentiate with other online competitors.”

PEC: Anything else on your mind for our readers?

Wei: “Our new partner Vendio knows U.S. B2C [business to consumer] market very well. I recommend that your audience think of Vendio as their supporting partner. The good news is Vendio offers everything free–there is no sign-up cost, which offers a low entry barrier for online retailers, in particular very small retailers. Then we will be there to help them think about sourcing, and we also provide an escrow service to ensure their money is in the safe.