With the U.S. dollar’s decline, buying American-based products online just got a lot cheaper for the rest of the world’s slew of Internet shoppers. 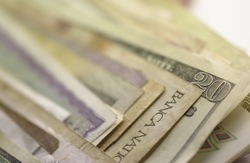 Internet users outside the U.S. now account for 80 percent of the world’s online population, with rapidly developing countries experiencing double-digit growth rates year-over-year, reports comScore Networks Europe. Right now, those international shoppers are getting a virtual 11 to 94 percent off American-bought products, just because their currencies are worth that much more.

Enter the new age of international shopping. In South Korea, 99 percent of those with Internet access have used it to shop, followed by the U.K., Germany and Japan at 97 percent, according to the latest Nielsen Global Online Survey on Internet shopping habits. Meanwhile the U.S., at 94 percent, has fallen to eighth place in the world standings for online shoppers.

To be sure, there are still countries that raise fraud red-flags, such as Nigeria, Romania and Russia. But in areas like the U.K., where the pound sterling has risen 20 percent against the dollar, online shopping has become the third-most-popular online activity, according to June 2008 data from U.K. trade group the Institute of Practitioners in Advertising.

As a business, you don’t want to be spending money, time and effort trying to keep international shoppers away, says Howard Schecter, director of client services for preCharge Risk Management Solutions, an international payment processor for more than 150 currencies. Instead you want to be encouraging the shoppers your way.

Fewer than 15 percent of nearly 2,000 U.S.-based merchants recently surveyed by preCharge actively sell internationally, says Schecter. Contrast that to the 85 percent who said they’d like to, and the lack of U.S. e-merchants plunging into international waters could translate to high-dollar business for those that do. “The ones we work with,” says Schecter, “quickly discover that they’re developing new repeat customers who can’t buy U.S. products elsewhere.”

The simplest way to position a site for international buyers is to translate it to their languages. There are a plethora of translation services available on the ‘Net.

Our testing of some of the top-ranked “free translation” search results showed marked differences in translation abilities. Our Spanish-to-English test of four sentences indicated that Yahoo!’s Babel Fish and Promt were the most accurate in giving those sentences readability. The beta version of Google Translate and Freetranslation.com were in the middle. Windows Live Translator and InterTran were the least accurate.

All had sentences that were incomprehensible in the translation. As Jeff Chin, a product manager for Google Translate, put it: “We know [mechanized translation] is not perfect . . . but it plays an important role in helping people access content they might otherwise be unable to read.”

That’s why, even with the new tools, working with a human editor—one with real-world multi-lingual experience—is still very important. Free Translation charges $40 for the human touch on up to 266 words and more for larger blocks of text. Open-source translation program Worldwide Lexicon was built from scratch by human translators; it integrates directly into a site but has its not-yet-translated limitations.

Complete human translation of ecommerce-site text “costs the same as for paper text,” says Dorine Houston, an English-to-Spanish text translator certified by the Universidad Complutense de Madrid. “It’s $80 to $100 per 1,000 words, depending on the complexity of the language in the text.”

So to shave costs, e-merchants should think critically about the text they intend to use on pages they intend to translate, Houston says. “The best way to make a translator’s job easier is to write your text in good English and avoid anything that is ambiguous or confusing. . . . Proofread your document in your source language and make sure what you mean is actually expressed by your rhetorical patterns, sentence structure, mechanics and lexical choices.” Higher fees apply for extras such as inserting URLs and rush jobs. A good translator, Houston says, will consult with you regarding any doubts or ambiguities.

For e-merchants now offering chat support, there are even real-time translation services for that. Shoppers and customer service personnel each type in their own languages, and the system automatically translates the answers for the other side to read. Freetranslation.com’s SDLChat Translator and Meglobe.com’s IM translation tool are both free options. MeGlobe currently requires that users connect first by email or previous registration at the Meglobe.com site, however. Meanwhile, WorldLingo has a for-purchase chat translator along with its translator for blogs that has received decent reviews.

From there, international sites even have their own search engine rankings. Google’s new “Language Tools” tab on its search homepage is available to every Google searcher. Shoppers specify their language and their key words; the search engine finds the translated sites to match.

How to offer multiple currencies from your ecommerce site.