Twitter has served as a marketing and customer service channel by small businesses for years. Now merchants can use it to promote ecommerce, thanks to a third-party platform called Chirpify and Twitter’s own efforts to open its advertising platform to small companies.

Chirpify is the only commerce platform designed for use with Twitter.

Chirpify, which first launched in 2011 under the name Sell Simp.ly turns Tweets into transactions, enabling consumers and businesses to “buy, sell, donate and transact on Twitter.”

To utilize the platform, merchants follow a three-step process:

Chirpify offers three merchant account levels: Basic, Pro and Enterprise. Costs to use the service vary based on the level chosen. At the Basic level, Chirpify charges a flat 4 percent per transaction fee.

The Pro level requires a $49 monthly charge, but the transaction fee is reduced to 2 percent. In terms of features, the only apparent difference is that the Pro level provides access to email tech support where the Basic level does not.

Once registered, merchants need only to Tweet a listing with a product image. Shoppers who wish to purchase the item simply reply to the Tweet with the word “buy.” The transaction is processed through PayPal and a receipt with shipping information is sent to the merchant and buyer via email. 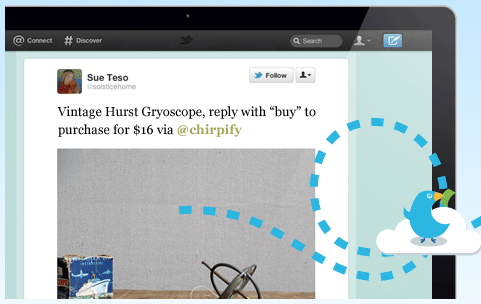 Chirpify sets no limits on the number of transactions, regardless of the account level chosen. And, since the only requirement is to use a product image with the Tweet, it doesn’t matter where merchants list products.

Use of the platform is not confined to online merchants either. Physical retailers, individuals and even non-profit organizations can also take advantage of its features.

In and interview with CNBC, Twitter CEO Dick Costolo said that small businesses have been “banging down the door” to gain access to Twitter ads. Starting in March, the company will make that possible in a limited fashion through a partnership with American Express.

AMEX cardholders and merchants who use Twitter can take advantage of its new self-service platform, which was launched last November. As an incentive, American Express is giving $100 in advertising credits to the first 10,000 that apply. 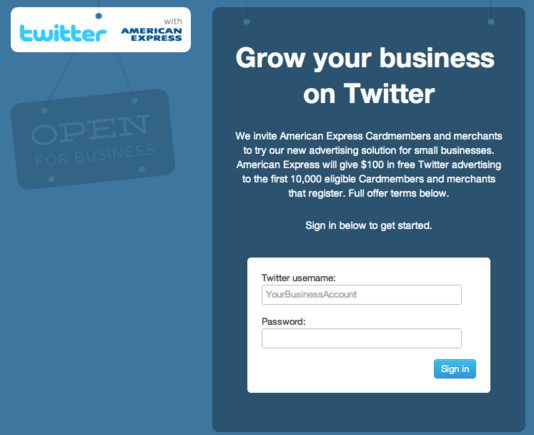 Twitter’s self-service ad platform works similarly to that found on both Google and Facebook. Merchants can bid on keywords for Promoted Tweets, which, according to the Twitter help center, are “ordinary Tweets purchased by advertisers who want to reach a wider group of users or to spark engagement from their existing followers.” Promoted Tweets appear at the top of users’ feeds. 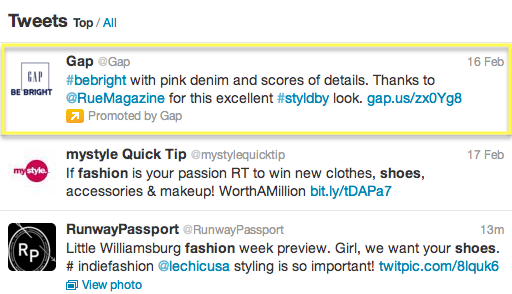 Small businesses will be able to log into the platform, set their budget and target based on geography. Advertising is pay-per-performance based, so charges will only be applied when merchants gain new followers or when users engage with the Tweets.

The minimum bid requirement has been removed, so even businesses with small marketing budgets can participate. Previously, the minimum was $10,000 per month.

Though advertising is limited to American Express cardholders and merchants at present, Twitter reportedly plans to open the opportunity to even more small businesses later in the year.

One has to wonder why it has taken so long for Twitter to follow in the footsteps of Google and Facebook and make advertising and commerce options available for small business. Thanks to Chirpify and Twitter itself, that day has finally come. I would not be surprised to see a large response. It means millions of dollars in revenue for Twitter and yet another channel through which merchants can offer their wares.