GoDaddy’s Bob Parsons: We’re Only Seeing the Tip of the Iceberg

Bob Parsons takes risks, not something your average CPA tends to do easily. But then Parsons isn’t your average CPA, although he has a degree in accounting and worked as one for several companies.

Parsons took a risk when joining the Marines after growing up in a “Blue Collar” Baltimore neighborhood.

The Marines sent him to Vietnam, more risks. When he got back, he went to college and earned his degree. He went to work in a risk-free environment managing the numbers for other people.

It didn’t suit him. 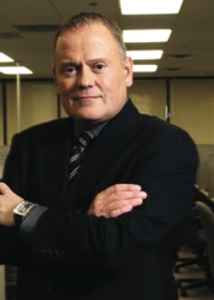 At a risk factor of 10, he jumped off the edge of the world and started Parsons Technology, a software development company that provided packaged financial and accounting software for home and small business.

A self-taught programmer with no computer education, Parsons wrote the original Parsons Tech programs. He built the company to a $100 million operation with 1,000 employees — 80% share of the legal market, 80% of the Christian market, and the number-three tax preparation package. Then he sold the company — it seemed like the right thing to do, he says.

He retired for about a year. But, the comfort of millions in the bank and no worries didn’t sit well with him, and he started casting about, looking for something to do, something that had a little excitement and risk in it.

He took up “giant-killing.”

In the late 1990s, he decided to go against the “only game in town,” Network Solutions, in the Internet domain registration business. Under the “forgettable” banner, Jomax Technologies (named for a road in Scottsdale, Arizona), Bob Parsons launched a venture that has changed the Internet business. You might know it by a different word.

Practical Ecommerce: Where did the name GoDaddy come from?

Bob Parsons: We had to change the name. Jomax was so forgettable. We thought and thought and threw out different words. Someone said, “Big Daddy,” and we checked that. It was gone. I typed in GoDaddy.com, and it was available. I registered it. It is as simple as that. But two things happen when somebody first hears that name. They smile, and they remember. So, the name means nothing, it’s just there, and it works for us.

PEC: Where did you get the idea to start a domain registration company in the face of an established industry “giant”?

Parsons: I didn’t have an idea. I retired for a year after I sold Parsons Technology. I hated that. I mean, it was a very uninteresting life for me. I needed to have some risk and excitement in my life — something needed to be on the line again.

When I started Jomax, the only business plan I had was to hire some bright people to look at opportunities on the Internet. We tried a number of things that didn’t work, and I lost a fistful of cash in the meantime.

But we settled on the domain registration business because the market was so incredibly overpriced, and the service was terrible. That proved to be the right decision. It took us about a year to get everything in place, but we did, and it worked out.

PEC: During that year, did you ever come to a point when you thought you had made the wrong decision?

Parsons: Well yes, I was the only investor. I watched the cash go out in all directions. That was when the market collapsed — the dot com thing — and there were months when I would see $2 million evaporate, just like that.

I got pretty low, and in early 2001 I decided to close the company. I flew to Hawaii to take a little time off and think about how I would close it down. But, while I was there, I decided that was not what I wanted to do. The epiphany came when I saw a guy parking cars. He was happy. I thought, heck, the worst thing that could happen is I wind up parking pars — or I could go to Vegas and be a stick man at a table — I always thought that was kind of cool.

So I came back and said, if the company goes broke, I’ll go broke with it. That October, we turned the corner, and we’ve been making money ever since.

PEC: You are deeply involved in the ecommerce industry.

Parsons: That’s all I do.

PEC: What is your take on the industry’s future?

Parsons: It’s going to do nothing but grow. It’s going to grow at unheard-of rates. More and more businesses are migrating to the Internet. Most companies don’t sell online, but most will discover they need to, both as a customer accommodation and for revenue enhancement. We’re only seeing the tip of the iceberg.

PEC: What makes you think we’re only in the embryonic stages

Parsons: Because most companies do not sell online. Those that do know if they do it right — pay attention to security, design their site so it’s appealing and workable — they’ll attract customers.

We live in a society where when we decide to do something, we want to do it right now. More businesses need to wake up to that fact. If someone wants to get up in the middle of the night and shop, and you’re not there, someone else will get the order. Most of my shopping anymore is done online.

PEC: What sorts of things does Bob Parsons buy online?

Parsons: I buy clothing, books, personal items. I buy anything online that I can, right down to vitamins. And I love the auto manufacturers’ sites. I can build a car exactly the way I want right at my desk. Then I use that data to go to the dealership.

PEC: What are the challenges of ecommerce along the way?

Parsons: There are two things, and they are a kind of chicken and egg thing. First, the site must be secure. That means you need to make sure fraud and ID theft (and that sort of thing) are managed.

Second, you must educate your customers or users — you need to teach them that your site is safe and can be trusted. You have two types of people. Some use the Internet and know it and understand it. And some don’t. Much of the growth and good will come from those who don’t. So, we have to overcome that element of fear–fear of the unknown. But, those people not only need to be educated — they need to be protected.

PEC: Whose responsibility is it to accomplish that task?

Parsons: The industry itself has to do its part. I also think a lot of the responsibility falls on the shoulders of the Department of Commerce. Now, are they working on it? Yes. But could they be doing more? Yes. But they can only do what the legislative and executive branches allow them.

PEC: Is it your sense that the idea of taxing transactions on the Internet will raise its ugly head again somewhere down the road?

Parsons: Anytime you have a source of money, you’re going to have people try to get it. But, if that ever happens, it will set us back.

PEC: Are there technological challenges that need addressing in ecommerce?

Along with that is better bandwidth. The faster the bandwidth, the more things we’ll be able to do, like have three-dimensional displays of the products, where a customer can almost feel what it would be like to touch them.

PEC: You’re a very successful ecommerce businessman. What are some of the mistakes that you see other ecommerce entrepreneurs making?

Parsons: They have to do a better job promoting their sites. First and foremost, no matter how well the site is designed, it’s not going to do anything if people don’t get to it. They need to work on search engine optimization, advertising, non-Internet advertising, and promoting it directly with their customers, which is perhaps the best way.

The second thing has to do with the site’s design to make sure it is actually useable. That’s done through usability testing, having people go through it and make sure that mere mortals can navigate it.

The third thing is to make sure enough information is available that defines the products being sold. If customers want more information, they must be able to get it quickly. If the information is not there, the user or customer will always assume a negative.

PEC: Many people are unconvinced about the need for in-depth content on a site.

Parsons: Yes, and the market will teach them. They also need to test the site and its products. I’ve found that almost nothing works the first time.

PEC: What’s in the future for GoDaddy?

When new technology breaks, we will be there. And our customers — new or old — will be able to take a domain name and use it in that regard.

One of the things that is exciting is this new .mobi domain. This domain is for sites designed to be accessed from a mobile or a PDA-type device. So what we’re doing is creating software that will, besides creating a regular site, also kick out a .mobi site. And we’ll provide our ecommerce cart and secure certificates that will enable that system.

We look at ourselves as enablers. What we enable are domain names.

PEC: If you had one piece of advice for startup ecommerce people, what would it be?