I first wrote about Google Knol here at Practical Ecommerce in January 2008, before it was open to the general public. Now that it is live, the Knol project is worth revisiting because of its potential search engine optimization ramifications. 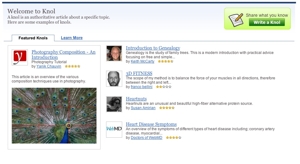 As has been well documented, Knol is a new Google entity that competes with Wikipedia as a sort of online encyclopedia. Google tells us that the term “knol” stands for a unit of knowledge, and seeks “to encourage people who know a particular subject to write an authoritative article about it.” There are differences between the two knowledge bases, but for all intents and purposes, Knol looks to be very much the same animal as Wikipedia. More than likely, there is a good reason for this: Google ain’t stupid.

Wikipedia is on page one

Somewhere along the line, Google realized it needed its own Wikipedia. As it stands now, almost any subject you type into Google returns a Wikipedia entry on page one. Type in, for example, “elbow.” As I write this, Wikipedia is the third result for that obnoxious-yet-fun word (evidently, it’s a ginglymus or hinge joint). Google has given Wikipedia incredible credit in its search engine, and not without merit; the site offers (for the most part) well-organized information presented in a primarily textual format with lots of reference support for the majority of articles. But Google is about monetizing the distribution of information, and Wikipedia offered no way to do that.

With Knol, it’s likely that Google is muscling in on a way to monetize the types of results that are now reserved for Wikipedia. Knol authors can use their AdSense accounts to monetize their articles. As Knol matures and grows, Wikipedia results will be gradually pushed down and/or out of top-end results. It’s a financial likelihood: a year from now, the term “elbow” will have a Knol article as one of the top five results in Google, with a Wikipedia result hovering somewhere below.

Position yourself as an expert

So, just as a presence in Wikipedia became a SEO attribute for merchants because of the high results in the world’s most popular search engine, so too will it be for Knol. Many of the Knol tenets I presented in my January article still hold true. People concerned with search engine optimization, including those associated with ecommerce websites, should position themselves as experts on subjects related to that which they offer online. The time to strike is now: sign up with Knol and start writing articles. Offer real and accurate information in the articles that makes no direct reference to your company. Use the bio section to correlate yourself with your ecommerce site.

The future of Knol remains unshaped, but it’s an exciting opportunity—one that was once the core of Wikipedia but disappeared long ago. The opportunity will eventually disappear with Knol as well. Attach yourself to a subject that you know well and relates to your online business before the window closes.