At its recent 2016 Performance Summit, Google’s senior vice president of ads and commerce, Sridhar Ramaswamy, stated, in the keynote address, “the shift to mobile is not something that is happening. It has happened.” He said that Google has a “whole new vision for AdWords and Analytics” for what is now a “mobile-first world.”

At the summit, Google staff announced several significant changes to the AdWords platform. Readers who remember the launch of Enhanced Campaigns in 2014 — which was not universally embraced by the AdWords community — may approach the new changes with caution. However, in my view, the changes are welcome and less of a paradigm shift than Enhanced Campaigns.

During the address, four points were noteworthy.

With the removal of right-side ads in search results, all ads now appear in the main column, either above or below the organic listings. Since the character-count limits were initially set to accommodate right rail placement, having them in the main column calls for an adjustment in formatting. Here’s what will be changing.

Given the character-constrained nature of AdWords’ text ads, these changes are important. They give advertisers an additional 35 characters of text for headlines and another 10 characters in the description. Add in the numerous, potential ad extensions, and pay-per-click ads can now occupy a lot of real estate in search results.

But, for me, the main takeaway is that ads will look more like the organic listings. This is nice from a design perspective because it gives the search results a unified feel from top to bottom instead of one block of ads and one block of organic listings. Cynics will mention how it will increase click-through rates — which Google acknowledged — and thereby increase Google’s revenue. In fact, beta testers of the new format have seen up to 20 percent higher CTR. But with right-side ads gone, the new format makes a lot of sense.

Google is also changing display ads. This is seemingly a small change, but it will have a large impact.

In short, Google will create display ads for you on the fly. You just have to “provide headlines, a description, an image, and a URL — and Google will automatically design these beautiful responsive ads.”

Here’s the example from Google, to illustrate. 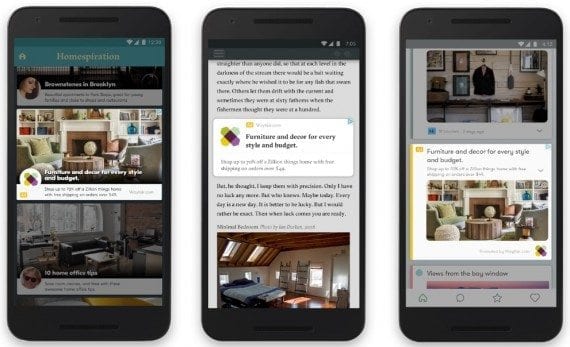 For display ads, Google will use content from advertisers and automatically generate ads that fit the medium, whether an app or a website, image or text. (Click image to enlarge.)

Google has taken the ingredients provided by the advertiser and cooked up ads that fit the medium, whether an app or a website, image or text. I like the change, but I’m skeptical about giving Google so much control. It will likely help many small advertisers that don’t have design resources. But larger advertisers with detailed style guides and branding guidelines may not welcome the move.

Overall, the change presumably helps Google because it will encourage more advertisers to take advantage of the Google Display Network. It could also be a boon to content publishers relying on AdSense revenue.

Bid Adjustments for Each Device Type

Some of the loudest complaints about Enhanced Campaigns were the combining of bids for tablets with desktops and laptops. Though Google asserted time and again that tablets didn’t perform differently enough to justify the split, advertisers would post reports showing otherwise, such as this tweet.

Now Google seems to have “unenhanced” its device bid modifiers, effectively admitting defeat on this point. Advertisers will now be able to bid separately on desktops-laptops, tablets, and mobile (smartphone) devices. Google, also, is expanding the variation range from the current +300 percent to a +900 percent.

The initial impact will likely be wide-scale downward modification of tablet bids. While some advertisers target tablet users and succeed with them, many see poor results when compared to desktop-laptop users and will quickly move bids down to equalize cost-per-acquisition across device types.

I had hoped for this functionality sooner. But, alas, it’s better late than never.

Google Maps has not previously included ads. But no longer. Google will launch “Promoted Pins” in Maps — the same name, by the way, that Pinterest calls its ad-based pins.

Here is an example of a Promoted Pin and its associated business page. 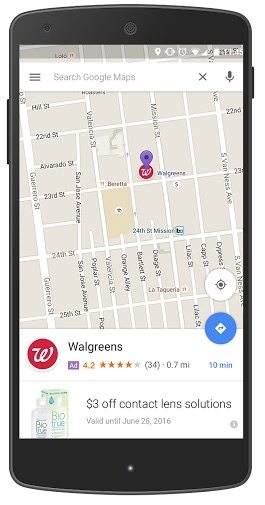 A sample Promoted Pin, from Walgreens.

Given that nearly one-third of all mobile searches are related to location (according to Google), this is another smart move. Consumers are looking for, say, restaurants, auto dealerships, and stores relative to their current location. This will allow advertisers with physical stores to reach these prospects. With Google’s beacon technology — potentially linking smartphones with specialized offers and announcements from individual businesses — and the coming ability to track actual in-store visits to ad clicks, Promoted Pins will likely become increasingly common and successful for savvy advertisers.

When Will These Changes Occur?

Google is notoriously cagey about launch dates. One clue, in relation to text ads, was from Google announcement: “We encourage you to start planning for this upgrade before it rolls out later this year.”

So, at least the text-ad changes will likely occur by year-end. The other features will presumably launch this year or early next year. But don’t hold your breath.