”Lessons Learned” is a series where we ask ecommerce business owners to share their experiences and advice. For this installment, we interviewed Virgil Dickerson, CEO and owner of Suburban Home Records and Vinyl Collective, a Denver, Colo.-based music label that sells music, digital downloads and tangible albums in CD and vinyl forms, as well as music-related apparel. 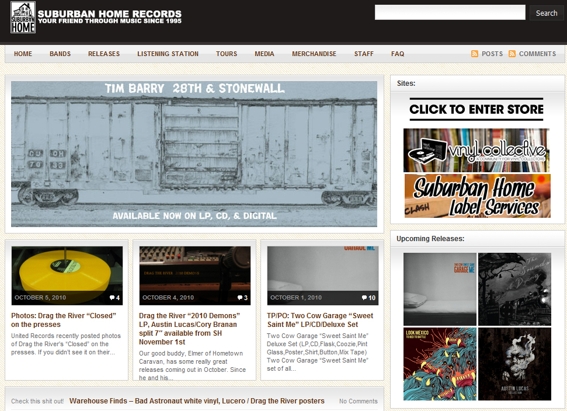 Suburban Home Records launched in 1995. In 2008, the site recorded gross revenues of roughly $1 million. Sales have reduced since then.

Dickerson holds a bachelor’s degree in molecular biology from the University of Colorado at Boulder and it was there, while pursuing his undergraduate degree, that his burgeoning record label came to life.

“It all started with, what underground music fans call, a ‘fanzine’ – an independent magazine about local the local music scene. In 1995, I started a fanzine called ‘Suburban Home.’ This fanzine opened the door for me to begin booking shows at ‘Club 156’ (a campus-run venue within the University Memorial Center). I continued to book shows all over Colorado and along the way started a record label. After receiving my Molecular Biology degree, I tried working in a lab for a year and hated every minute of it. So, I opted to continue working in the music industry from there. 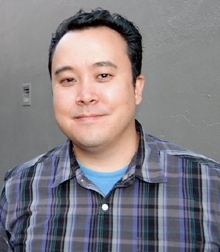 “I just dove in head first. I have no professional experience in business. I never studied business, with the exception of a macro and micro economics class in college. I was just inspired by the world around me, the local music scene. Then suddenly, some friends had started a band, recorded a record and needed help getting it released. I wanted to help. It was a natural progression to start a music label.”

“When I first started Suburban Home, it was just me. Much later, I hired one other employee, who made a whopping $6 per hour. Salaries were low. I think I paid myself $2,000 per month and my first employee might have made $1,000 per month.

“Then, at the peak of the business in 2008-2009, I had 10 employees and 3 interns. It was tough to manage, even tougher to swallow the payroll expense and pretty much an all round headache.

“Now, we’ve downsized again as the industry is retracting. It is back to how we started, a few freelance employees and myself. I miss having a people around, but it is less stressful and my overhead is a lot easier to manage.

“I recommend hiring as slowly and carefully as you possibly can, even if it seems as though things are really moving forward quickly for your business. It is always tough to fire or let someone go. But to handle that, it is absolutely crucial that the entire staff knows how things are going at the company so they don’t have a false sense of where things are. So, when that talk eventually happens, they are not caught off guard. Just be careful with any decision to add more overhead; make sure you realize just what that means long term.”

“Suburban Home Records first sold through mail-order only. That was in 1995 and long before there was an ecommerce option. Music fans would see ads in punk-music-scene magazines like ‘Punk Planet’ and ‘Maximum Rock and Roll’ and send in cash or money order. No one was selling online then.

“I still print postcards with recent releases, but it has been a very long time since I have done a full on printed catalog. I used to have a printer who could print a double sided full page catalog (black and white) and I think I got 10,000 done at a time for like $300, but this was back in 1998 and 1999.”

“When Suburban Home first started selling online in 1999, we sold on both eBay and used Zen Cart, but that was a very long time ago.

“We then decided to upgrade our own site around that same time. So, I had a friend who was going to school for web design; he built the first Suburban Home Records website and I could not tell you for the life of me the platform he used. It wasn’t a very sophisticated website and at the time I had no idea what should go into a website. There just weren’t a whole lot of models to look at back then.

“These days we are a bit more sophisticated. The cart I work with now is Limited Pressing and they are a really effective, easy-to-use store. And it is very inexpensive at $14.99 a month.

“The Suburban Home Records website is hosted by DreamHost. And now I use WordPress to build and maintain my blog on the site. I like how easy and powerful WordPress is. It is very inexpensive to host and run. WordPress is free and I might spend about $40 to $50 a month hosting it, only because I have a ton of streaming players and downloads on the site.”

ListenListen to Virgil Dickerson discuss his early interest in music and offer some professional advice for aspiring music entrepreneurs.

“In 1998, I wanted to try retail and started a brick-and-mortar music retail store in Denver called Bakamono, which is a Japanese phrase that means ‘crazy stuff.’ We sold independent music, clothing, books, fanzines and Japanese toys. The store turned out well, but Denver already had two of the greatest music stores: Twist and Shout, and Wax Trax.

“Bakamono only lasted a year and I learned pretty quickly that brick-and-mortar retail is very tough. You always have to have the store staffed, so payroll is always high. A successful store needs to have really great coverage of product even though lots of those products sit around collecting dust, and the hardest thing in music retail is you can’t compete with ‘free,’ which is how most music is purchased and consumed these days.

“Running the store was a lot of man hours, a lot of work, and at the end of the day, it just didn’t pan out for us. I would not do another brick-and-mortar store today. But I think there are neat twists on the brick-and-mortar model that can work (i.e. have a coffee shop, a venue, and/or a bar in the store and you don’t have to just depend on physical sales).”

“I use a combination of email newsletters, blogs, Facebook, Twitter, music message boards like Punknews.org and press releases. I think the blog and newsletter are my best strategies, but message boards have a lot of power, too.

“For the newsletter, I use ‘YMLP,’ which stands for ‘Your Mailing List Provider.’ I have used them for close to 8 years and I have no complaints.

“And currently, I actually don’t run any online ads. I have in the past, but my niche is so narrow, most people who are into collecting vinyl [records] know how to find my releases. I know I could benefit from doing these ads, but there isn’t enough time in the day.”

“My online store is an inventory-based system, meaning I have physical goods that I stock in our warehouse and I can, and do, run out of those products. My online store doesn’t communicate with my invoicing software, so much of my inventory tracking is manually handled – it can be problematic at times and I can loose track of total stock of a particular product. When I’m restocking inventory, I post a pre-order for products I’m low on. When I’ve sold out of a that product, I finally place the order and increase the quantity of that order by just a small number above what I had pre-ordered in an attempt to keep things somewhat efficient and well-stocked.

“I can manage it, though, for the most part because I only carry my own products, but on occasion I will carry another label’s products. However, over the years I’ve over-ordered product, I’ve sold more than a label was able to promise me, and I’ve made mistakes with quantities, variants, and so much more.”

“Our shipping and fulfillment process is a manual system. I open up my open orders from my online store and copy and paste the customer’s physical address and email into Stamps.com [which integrates with U.S. Postal Service]. I pack all the mail orders in-house. The online store is very inexpensive, maybe $100 a year. Stamps.com costs $15.95 per month and of course the cost of postage varies. Mailing supplies vary, too, depending on the mailer, amount of tape needed, and I use sticker paper to print off the postage.”

“I handle all of my customer service with varying amounts of success. I try to be as helpful as I can, but sometimes the email inbox gets overloaded and some of the emails get lost. These days, I try every morning to respond to every single email, because if you handle it right the first time, you don’t have to deal with it a second or third time.

“Over the holidays, I try to do a ‘Twelve Days of Christmas’ sale, where I have a new sale every day. But, it kind of backfired this year. I stopped at day five because I had too many orders and not enough time to fulfill the orders. I also took about two weeks off around the holidays when things had slowed down and I didn’t really check my email. I had some customers email me five or six times over this time. So, when I did go back to my computer, things were absolutely nuts.”

“I’ve made every mistake imaginable. I had out of control overhead. I put out too many records. I pressed too many copies of records that were never going to sell that many. I made bad assumptions about the potential sell-through of records that shipped through distributors. I got caught up in a growing business and let it take me to a place I should have never gone. I budgeted poorly when things were going well. I never forecasted things for a downturn. I sell a product people get for free in a troubling economic time. That’s just off the top of my head. I could go on for hours.”

“I have had lots of successes with growing smaller bands and seeing them become successful touring acts. Vinyl Collective at one time was quite successful and was the main source for independent vinyl. I’ve had records appear on the billboard independent charts. I’ve spoken at panels at SXSW [South By Southwest, an Austin, Texas music festival] and CMJ [College Music Journal, an authority on independent music]. I’ve had press in The New York Times, among other well-respected outlets.”

“Be careful. Believe in your product. Try to offer things not sold in every other store. And finally, just try to make the shopper’s experience a fun one.”