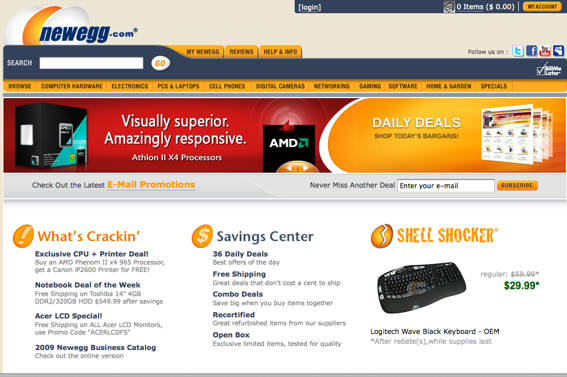 Newegg.com, the electronics retailer, intends to raise some $175 million through the initial public sale of its common stock. The company filed registration documents with the U. S. Securities and Exchange Commission in September, and a review of those documents reveals a fast-growing, profitable company.

Newegg was founded in 2001 in California by Fred Chang, who was the CEO and board chairman until 2008. Mr. Chang owns 77 percent of the voting shares. Prior to founding Newegg, Mr. Chang was CEO of ABS Computer Technologies. He’s a Taiwanese immigrant, and holds a Bachelor’s degree in Applied Mathematics from the Chinese Culture University of Taiwan.

According to Newegg’s filing documents, the company has never lost money. It recorded profits in its first year of operations and has posted annual profits since then. For 2008, the company recorded gross sales of roughly $2.1 billion, and profits of roughly $21 million, for a profit margin of roughly 1 percent. By comparison, Walmart’s annual profit margin is roughly 3 percent. Newegg says it is the second largest pure-play ecommerce retailer in the U.S.

Virtually all of its sales have been in the U.S. For the first six months of 2009, for example, just 5.6 percent of its sales were outside of the U.S., according to the filing.

The company offers revealing customer and conversion numbers in its filing. As of June 30, 2009, the company had roughly 12.6 million registered users and roughly 4 million active customers. The company says it had roughly 91 million visits to its website during the first six months of 2009 and roughly 3 million orders taken during that period. This would equate to a purchase conversion rate of roughly 3.3 percent. The average order size during the first six months of 2009 was $185, according to the filing.

The company says that roughly 70 percent of the 2008 visitors to its website came without having incurred a click-through fee. It says that, during the same year, 74 percent of its orders came from repeat buyers.

Although virtually all of its sales are from U. S. based customers, the company is investing heavily in the China market. Of its 2,000 full-time employees as of June 30, 2009, roughly 1,100 of them are located in China. The company has numerous operations facilities located there, as well as a website dedicated to that market.

Newegg is looking to raise roughly $175 million in its initial public offering. The filing states that roughly $25 million of that will go to expand its China operations. Roughly $9 million will repay outstanding debt and the balance will be used for “working capital and general corporate purposes.”