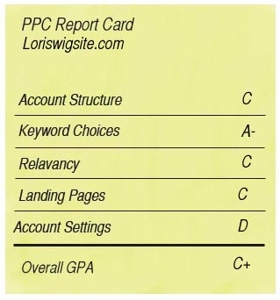 her pay-per-click marketing efforts and examine how the company’s current agency does the job. Loriswigsite.com is running advertising campaigns on Google AdWords and Yahoo! Search Marketing. The monthly ad spend recently has been around $1,400 in Google and $200 in Yahoo!.

Let’s see how the outside agency is performing.

At a first glance, the account structure seemed okay but when I started digging deeper – it turns out that the account is “messy”. There are two Yahoo! accounts: paused U.S. account and active U.K. account. In the U.K. account, irrelevant keywords are grouped in four different ad groups. In order to maximize one’s quality score and get the cheapest possible clicks, keywords should be grouped together in logical ad groups. For example, keywords such as “human hair extension” and “crossdressers” should NOT be in the same ad group. Similarly, “cancer patients” and “wig” do NOT belong in the same ad group. Both, Google and Yahoo! might penalize you for not having the most quality-score-friendly account structure by either cannibalizing your ad positions or driving up your cost-per-click rate.

Google’s account structure is very similar to the one in Yahoo!.

Even though keywords are not grouped as well as they could be, keyword selection is pretty good. The Google AdWords account has 337 keywords. The Yahoo! account has zero, however.

Additionally, I would strongly recommend running all three keyword match types (broad, phrase, and exact) in the same ad group simultaneously to achieve highest possible relevancy when users type in a search query. In Lori’s Wigsite account, I only found some instances of exact match keywords throughout the account.

The idea of having “Ad Groups” is to group keywords in a logical manner and create corresponding ads for each group. In this account, keywords are NOT grouped as well as they could be. Therefore, relevancy is most likely not as high as it can possibly be. (Relevancy is so important because better relevancy increases your quality score, the one not visible to advertisers, and could potentially improve your account performance). To maximize your relevancy, make sure there is a thematic relationship between keywords, ads and landing pages.

For example, if your keywords in an ad group are “wigs and hairpieces”, “hairpiece”, “wigs hairpieces” – it’s a good idea to repeat your main keyword in an ad title (and one more time in one of the description lines).

Using your own brand name in an ad title (unless it’s a household name) is probably not such as great idea, since you’ll be wasting valuable pay-per-click real estate and cannibalizing on your ad to keyword relevancy.

The basic idea behind pay-per-click landing pages is to put users on the most relevant page of your site. Additionally, your landing pages need to entice users to take further action – buy a wig in this case.

Per Google and Yahoo! account settings, most of the traffic is set to be landed on specific product pages, which is great. Unfortunately, it takes a while for some images on the pages to load, which might be problematic for users with slower Internet connections. Furthermore, since Google recently added server response rate into its list quality score factors – I would keep an eye on the quality score ratings in the account to make sure that keywords do not get penalized.

There are quite a few problems with account settings across Wigsite’s accounts.

Different URLs are used across the account. Some traffic is landing on http://www.loriswigsite.com and some traffic is landing on http://www.wigsite.com. Both sites are identical. Beside the fact that conversion tracking will be skewed and traffic analysis will be problematic – multiple URLs might also be confusing to the end users. I would strongly recommend picking and advertising just one URL.

Conversion tracking is not set up correctly. Search engine conversion code should ideally be installed to track sales conversions because at the end of the day that’s the only metric that matters. After some quick research, however, I found Google and Yahoo! conversion codes on some product pages and a home page. Even though it is important to track pageviews on the site – actual sales is a much accurate metric to identify the success of your PPC campaign.

In summary, Loriswigsite.com’s pay-per-click advertising campaigns have good keyword choices, but other aspects of the campaign, such as account settings, need much improvement. Because of that, I’ve issued an overall grade of a C+.