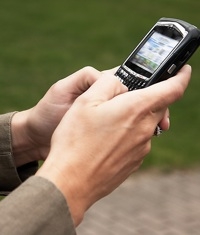 Selling by phone is a concept almost as old as Alexander Graham Bell, but in the 21st century mobile commerce (m-commerce) might be more about ecommerce than telemarketing. Consider that nine million Americans have already made at least one m-commerce purchase and some 125 million Americans told The Nielsen Company, during a recent study, that they were willing to make a purchase in the near future.

“In short,” said Debra Aho Williamson, senior analyst at the New York research firm eMarketer.com, “the more readily available [these phones] become, the more likely that people will be conducting ecommerce on their mobile phones in place of, or in addition to, their desktop.”

To address the m-commerce market, stores must ensure that their site renders well on a mobile handset’s tiny LCD display, doesn’t overwhelm the phone’s bandwidth, and doesn’t make navigating the site too difficult.

First, there is some good news. At the April 2008 MacWorld tradeshow, Apple claimed its Safari browser, which can be found on iPhones, was the most used mobile browser in the United States. This is good for ecommerce merchants since Safari renders web pages for mobile phones exactly as it renders pages for laptop or desktop computers. Furthermore, virtually every major mobile handset manufacturer has recently introduced a phone that offers a PC-like web surfing experience. Especially noteworthy was T-Mobile’s Android-powered G1 that was released on September 23, 2008. Android is Google’s mobile operating system that also renders web pages very well.

Of course, having a web page show up on a 3-inch LCD just like it does on a 17-inch monitor is still not the best way to promote m-commerce, since users must zoom in and out and endlessly scroll to make the site’s content large enough to read. Mobile handsets may also lack the required bandwidth to download graphics or pages as quickly as a desktop.

If a retailer is still evaluating m-commerce’s potential for its market, it might also consider quick conversion tools like those offered at Mobisitegalore.com that help e-merchants produce mobile-friendly text and image pages on a separate domain. M-commerce shoppers who visit a store’s home page and primary domain will be redirected to the Mobisitegalore.com version of the page.

Just because newer handsets like the iPhone, Verizon’s LG Dare, Samsung’s Instinct, and hundreds of others all support shopping carts just as a desktop or laptop would, it doesn’t mean that merchants should not still be concerned about how their payment pipeline works on a mobile device.

“Presenting a payment page on a cell phone is a lot different than on a PC,” says Adam Kerry, vice president of North American operations for Bango.com, a mobile payment set-up company based in Europe. “Merchants who don’t want to invest in a payment page that adapts to the size and browser of each cell phone will go with something like Bango.”

“Mobile phone orders aren’t differentiated as ‘mobile,’” Kerry says. “So even though we work with our own third-party processor, e-merchants could work with any payment processor they already have.”

Outside of Bango, mobile e-merchants can go with Google Checkout Mobile (starting at 2 percent of the order total, plus a 20-cent transaction fee) and direct payment gateways such as First Data. However, mobile phone order encryption is a particular challenge for merchants; it requires Wireless Transport Layer Security encryption. The above payment processors provide this encryption as part of their services. Separate certification providers like Entrust, a Texas-based digital security firm with 15 global offices, charge a whopping $1,199 for one year of WTLS encryption.

Meanwhile, the obvious payment solution for mobile purchases — billing for services via the shopper’s mobile phone bill — is still a long way from practical in the U.S.

“If we charge you through the cell phone company, it’s a real-time authorization with the carrier’s billing platform, and the international carriers now take only 15 percent or so of every dollar,” Kerry says. “The U.S. has yet to catch up: Merchants there [in the U.S.] get only 50 to 55 percent of every dollar a shopper spends and bills to their mobile phone bill.”