On February 12, 2015, Pinterest announced that it would “automatically remove all affiliate links, redirects and trackers on Pins.” This is important news because merchants with affiliate marketing programs could see a drop in revenue from that channel, depending on how many affiliates use Pinterest to drive traffic.

…merchants with affiliate marketing programs could see a drop in revenue from that channel, depending on how many affiliates use Pinterest to drive traffic.

Pinterest is a social media platform that enables users to curate collections of most any online content. For example, a fashion blogger can create a collection of links to her favorite denim jeans. These collections are known as “boards,” and each link is called a “pin.”

The fashion blogger has fans that she built up via her blog. Those fans could follow her to various social media platforms, such as Facebook, Twitter, and Pinterest. And whenever those fans see a product recommendation from her, no matter what platform it’s on, they may be inclined to click through and complete a purchase. Pinterest is simply another way for bloggers to interact with their followers. 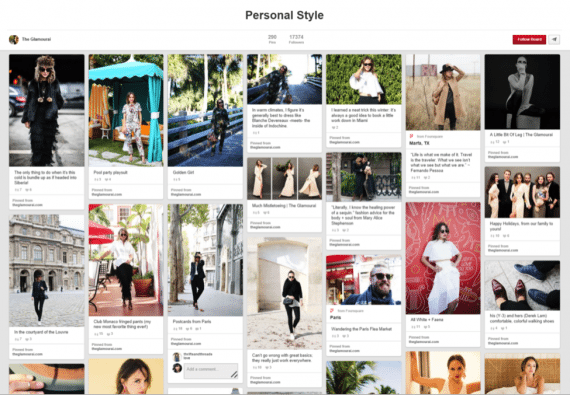 This Pinterest board, managed by New York-based blogger The Glamourai, features 290 pins related to fashion, and has 17,374 followers.

However, with the advent of social media, the blogger can now post those same affiliate links on Facebook, Twitter, Pinterest, and other social sites. She is simply communicating her product recommendations across multiple channels in the hopes that her followers will click her affiliate link and complete a purchase, thus generating a commission to her.

But now, Pinterest is blocking all those affiliate links. The pins remain, but the links are blocked — the pin still appears on boards, and can be shared, but click-through functionality is removed. This is not a surprise to affiliate marketers, as Pinterest has blocked isolated affiliate links in the past. But this is the first time that the website has issued a comprehensive ban on all types of affiliate marketing.

The ban comes at a time when four-year-old Pinterest is considering how to generate revenue from its 70 million users. In April 2014, Pinterest launched a test for “Promoted Pins” that enabled brand advertisers to pay for promotion on a cost-per-click basis. There is also industry speculation about Pinterest partnering with payments company Stripe to add its own “buy” button to user-generated content within the next three to four months. This move could place Pinterest in the role of the affiliate.

In fact, Pinterest experimented with the affiliate role in 2012, when it partnered up with Skimlinks (an affiliate marketing tool) to auto-convert pins into affiliate links. But the Pinterest abandoned that practice after it came under fire for not disclosing the practice to its users.

By banning affiliate links, Pinterest could be paving the way for another attempt at affiliate marketing, perhaps a transparent attempt at monetization.

There are still methods for affiliates to benefit from Pinterest. For example, the fashion blogger who curated a board featuring her top denim picks could link each pin to her own blog post, which could link to the retailer’s ecommerce site for affiliate commissions. While this approach could work in the interim, affiliates should not depend on Pinterest for that traffic. If Pinterest implements a “buy” button, the blogger’s traffic from Pinterest would likely reduce. If a retailer wants to benefit from a blogger’s Pinterest following, the retailer would likely need to work directly with the blogger, outside of an affiliate relationship. The retailer could compensate the blogger for curating a board, paying her a fixed amount instead of a commission.

In short, if a retailer’s affiliates use Pinterest as part of their marketing mix, that retailer will likely see a decline in affiliate revenue based on these changes. However, affiliates that depend mainly on Pinterest for their revenue may not be adding any value to your affiliate program anyway. These affiliate are building their success off a single site, instead of creating unique value — the heart of true affiliate marketing.