Switch to Cloud Hosting Pays Off for SoundsTrue.com

Every ecommerce site has a web host. Some are hosted by shopping cart providers; others are hosted by third-party companies. And increasingly, many are hosted by cloud providers, where bandwidth and usage can adjust with the seasonal needs of a site. One ecommerce company that has recently switched to the cloud hosting environment is SoundsTrue.com, a publisher of products and services that encourage spiritual development. We spoke about it with Theresa Fox, the company’s managing director. 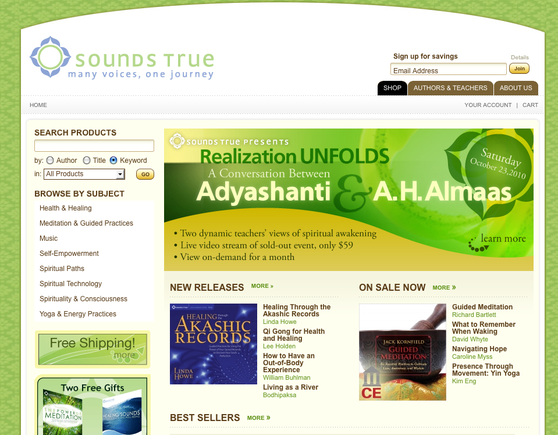 Practical Ecommerce: Please tell us a bit about SoundsTrue.com.

Theresa Fox “SoundsTrue.com is a publishing company that focuses on spiritual transformation, specifically in the categories of meditation, energy healing, life purpose and yoga. We sell audio programs that are recorded lecture style. We also sell videos, paper books and electronic products, such as digital downloads and e-books. We also have online courses and events.”

PEC: Can you explain the evolution of hosting your company has gone through, and tell us why you have now migrated to cloud hosting?

Fox “Originally, we were on a Yahoo! store, which was not only the hardware platform, but was software-as-a-service [SaaS]. So, we didn’t have our own shopping platform at all. We didn’t have the ability to do customization. We couldn’t combine our digital products with our hard goods. We used a separate store for that called Learn Out Loud at the time, and as we grew, it wasn’t meeting the need for moving into the downloadable world. And we weren’t able to build the online courses and events platform that we needed to deliver.

“So, in late 2008, we attempted to do all of this in-house. We rolled out [a new shopping cart] using KonaKart as the base, but we had all our own hosting servers. We’ve made significant modifications to the cart, and now, I’d say it’s barely recognizable as KonaKart anymore.

“Some of the main changes we made were in combining digital download products and hard goods in a single display during the search results. We changed the search algorithms. We reduced the checkout to a single page experience. So, we went with a base that was able to get us up and running very quickly and then did the modifications to get the product that we really wanted.

“With as much digital media that we have, it was getting very pricey for us to have the storage that we needed for all the delivery of the things that we needed. So, around January 2010, we began the cloud project to take a look at whether we could more cost-efficiently move this to the cloud, so that instead of spending our money on purchasing more and more hardware, we could get a system that would work better for us. So, we moved to Amazon Web Services around June.”

PEC: Approximately how many of your products were migrated to Amazon?

Fox “There are thousands of SKUs because we have multiple formats on some of the same products. So, there might be a digital version, a CD version, a video version, and so on. It adds up to thousands of different SKUs that have to be delivered, and some of them involve very large media files, especially with the video that’s in downloadable form. Some of those have become quite large and we were facing some challenges with being able to scale as there was more and more demand hitting our servers at the same time for some of that downloadable media. By being able to get the kinds of access times that we needed, and by using S3 (the high availability part of the cloud), we were able to make significant improvement in delivery time to the user, take the load off the servers for us, and really get a much more efficient delivery of that media.”

PEC: Do you use your previous servers at all now?

Fox “We do. We repurposed all of them and incorporated them into some of the internal systems. So, they became storage places for processing some of these files before they’re in final format, and we’ve been able to absorb most of it into other needs. For example, our art department needed more storage space for images and things like that, so we were able to repurpose the bulk of the equipment, and also use it for various other development environments, and so on.”

PEC: How did you reach the decision of picking Amazon?

Fox “There were two main driving forces. One is that Amazon is so well documented and there’s a ton of community resources and references. So, as you’re implementing and you’re encountering problems or challenges, it’s very easy to find other users who’ve experienced similar things and have already posted their solutions. To be able to get the kind of help that you need, to be able to tap into a knowledge base that’s already out there, is clearly important if you’re a smaller to midsize business.

“Then we had a person on our team that had previous familiarity with Amazon at a previous place of employment. So, it was something we could get up to speed on much quicker than one of the other platforms.”

PEC: Are you pleased with Amazon’s performance so far?

Fox “It’s been working out very well for us. We’re very pleased at this point. When we first launched in June, however, we did have some performance problems and some load balancing problems. By using the community resources I was talking about to research from, we were able to find the tips that we needed to get those addressed very quickly. By July, we were at a point where we were exceedingly happy with how it’s going. It cleared up problems that we had had when we were on our own hardware. [We were] not always able to deliver and handle the volume, and now we’re able to handle a far greater volume than we did at that time.”

PEC: Were the initial problems you mentioned related to how your software interacted with Amazon, or was it something that Amazon was doing?

Fox “Some of the problems that people talk about are noisy neighbors, meaning when you’re sharing [the platform] with someone else, and getting to a point where you’ve got a configuration where other things are not possibly taking some of the horsepower that you needed at any given point in time. Some of the things had to do with which applications reside where, or just things that we had to work out along the way. It was fairly simple to find enough information about it and get it all squared away. At this point, from a cost perspective, we’re even happier. The performance is improved and it’s cheaper than what we were doing before. On annual basis, we were paying five times as much in purchasing new hardware as we are for our servicing equipment. So, it was significant for us.

“Part of that is because we have so many very large media files, and the ability with Amazon to be flexible and expand to use only what you need and to pull down when we want to pull down. For example, our staging environment is not up 24/7. We run something, it brings it up in the morning when people arrive and are ready to start doing work and it pulls it down at the end of the day when they leave. If we ever have a situation where we need it up for an extra hour or so, it’s very simple. We just make that change and you only pay for what you’re using.”

PEC: What types of resources are available for you and your team at Amazon?

Fox “It’s pretty much self-service. There may be other options, but the self-service option has been working very well for us. We don’t have a direct contact person at Amazon that we work with in order to resolve things. We simply look at the literature that’s already out there and figure it out. I’m sure if we ever ran into something where we couldn’t get an answer, we could arrange for some additional help, but we’re trying to be pretty scrappy and cost efficient, and so we like to go with what’s available for free out there.”

PEC: Have you ever had any direct contact with an Amazon support person?

Fox “I’m not aware of us having done that at all.”

PEC: What is that underlying code of your customized KonaKart that is now being run on Amazon?

Fox “We have a combination of things, but the shopping cart part itself is Java. Also, in some of our front-end parts of the website use PHP. So, it’s a mix of different things, but the bulk of the guts of it are Java.”

PEC: How would you compare a cloud arrangement with a merchant using a third party, non-cloud environment?

Fox “I think it’s very dependent on what the third party is and how expensive that solution is. If you’re completely outsourced where you’re not maintaining internal staff and maintaining hardware–where someone else is taking care of everything for you–there’s usually a price tag that comes with that. I would compare that to what your cost would be in the Amazon environment.

“Typically, in those third party hosting things, you are committing to volume and you don’t have the same ability to flex or grow when you need to grow, shrink when you need to shrink, and constantly adjust. You usually commit into a certain size of hardware that’s guaranteed to be available for you, and then when you need to suddenly expand because you have an unusual spike in traffic, you’re not necessarily able to do that as efficiently.”

PEC: What advice can you share with our readers who may be contemplating moving to cloud hosting?

Fox “I wouldn’t wait until you get to our size. When we moved from Yahoo!, we probably should have gone directly to cloud at that time. I think that if we were a smaller business, it would be even more compelling to not have to manage the hardware ourselves. We had had some challenges with being able to solve some of the problems we were running into in that hardware space and it’s very expensive to get the kind of help you need when you’re trying to solve those things on your own. Whereas, in the cloud environment, it’s very easy and efficient to find things and get them corrected faster, and taking any kind of an outage when you’re small really hurts. Being able to immediately resolve issues really helps out a lot. So, my advice would be to just get into it and find out how it works for you. I don’t think there is a reason not to do it.”