The proposed acquisition by Visa of Authorize.Net’s parent company is the latest evolution for the storied payment gateway. Visa announced on April 21 its agreement to purchase CyberSource, Authorize.Net’s parent, for $26 per common share, or roughly $2 billion in cash. The deal is expected to close later this year. 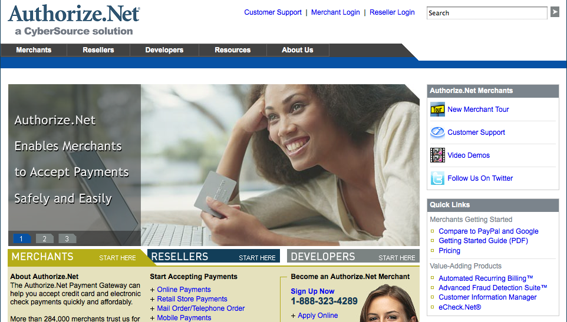 Authorize.Net was founded in 1996, in Utah, by Jeff Knowles, a credit card salesman to brick-and-mortar merchants. Knowles recognized the need to connect websites to credit card processors, to facilitate the acceptance of credit card payments on the Internet. That connection is now known as a payment gateway, and Authorize.Net has grown to represent over 225,000 online merchants.

Authorize.Net’s launch proceeded Google’s by three years. Jeff Bezos launched Amazon.com in 1995, and Jerry Yang co-launched Yahoo! in 1994. Authorize.Net, in short, is a pioneer in the ecommerce industry.

Visa is a much bigger company than CyberSource. Its 2009 revenues were roughly $7.3 billion, compared to $265 million for CyberSource, which includes Authorize.Net. But the deal marks Visa’s entry into the gateway business, and, perhaps, recognizes the growing role that ecommerce transactions play in the global economy. To date, Visa’s revenue primarily comes from “interchange” fees, which all merchant account providers pay. With the acquisition of CyberSource, Visa will now collect payment gateway and other ancillary fees, as well. Visa’s financial strength will presumably allow it to invest in infrastructure and marketing activities of Authorize.Net and CyberSource, accelerating the growth of those companies.

John Waldron is CEO of Merchant Focus, a merchant account provider, and he’s a longtime observer and expert of the credit-card business. His company is a reseller of Authorize.Net’s services.

“For resellers like us,” says Waldron, “I think the acquisition by Visa is a good thing. Visa has shown no desire to enter our merchant account business, so I feel they are a good neutral party. And we already have a working relationship with Visa, via the interchange fees that we pay to them and general processing compliance, as well as PCI compliance matters.

“This is a great opportunity for Visa. It enables Visa to collect more fees from online transactions, and gets them closer to managing risk involved with transaction data going over the Internet. I would expect that MasterCard will follow suit with a similar acquisition at some point.”

“But I’m not sure how I would feel if I were another competing gateway,” says Waldron. “All gateways have to work with Visa at some point, and Visa will now compete against them in the payment gateway business. Also, those competing gateways will be relying on Visa, in part, for PCI and general compliance approval. So, we’ll see how all of it plays out.”

In announcing the acquisition by Visa, CyberSource’s president and CEO, Mike Walsh, posted a letter at Authorize.Net for its customers. That letter reads, in part:

“In the near-term nothing will change. The way you work with our company and partners will remain the same, as will our commitment to deliver the highest quality service and support. Looking ahead, we anticipate being able to provide you even more innovation and greater global reach. As examples of this: