Businesses are increasingly turning to pay-per-click advertising on social media sites to reach customers and prospects. Twitter Ads are one way to do this.

Many business executives wrongly assume that Twitter is just a place for people to tell others what they are having for lunch. But Twitter is useful for business news, information, and interaction. Many people, including me, get most of their news from Twitter, since stories often break there first. The interactive nature of Twitter makes it a good way to interact with customers and prospects and share more about your business in a conversational manner.

To get the most out of Twitter ads, your business should already have a presence there. To learn how to build a Twitter audience, read “10 Ways to Build a Twitter Audience for your Business,” our previous article on that topic.

Promoted accounts appear in the “Who To Follow” section of the Twitter interface. They are a good way to increase followers. 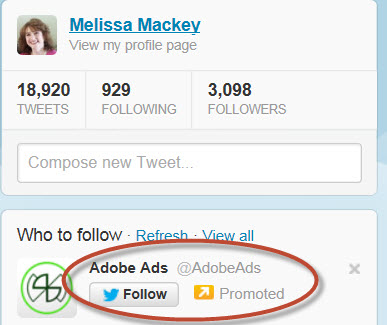 Promoted hashtags can get people talking about a product or topic. Hashtags help Twitter users follow topics or themes; clicking on a hashtag will show all tweets that include that hashtag. It’s a good way to follow the conversation around a topic.

“#unleash” is a promotion from T-Mobile.

In the example above, “#unleash” is a promotion that T-Mobile is launching. This ad appears at the top of the Twitter hashtag search, as follows. 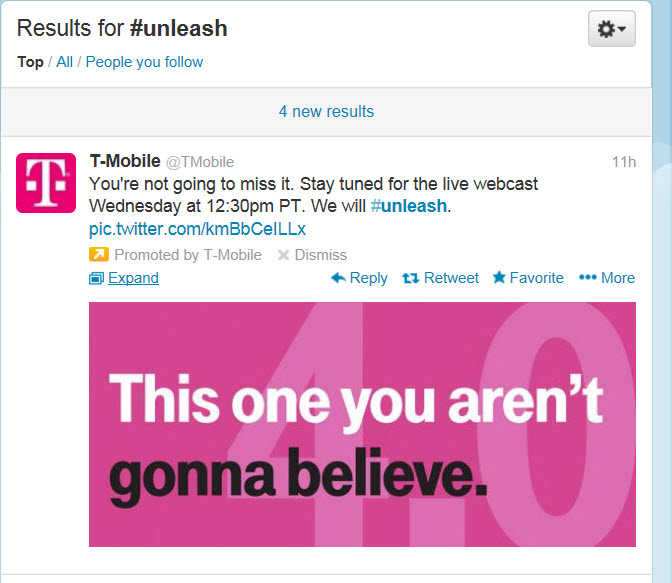 You’ll have some homework to do before creating a Twitter Ads account. For best results, a little planning is in order.

First, you’ll want to think about your goals to help decide which type of ad to use. Here is a list of common uses (from Twitter) for the various ad types.

Targeting on Twitter Ads can get confusing, because it depends on what kind of ad you’ll be running and what type of targeting you choose. If you’ve chosen promoted accounts, the targeting options are relatively straightforward. 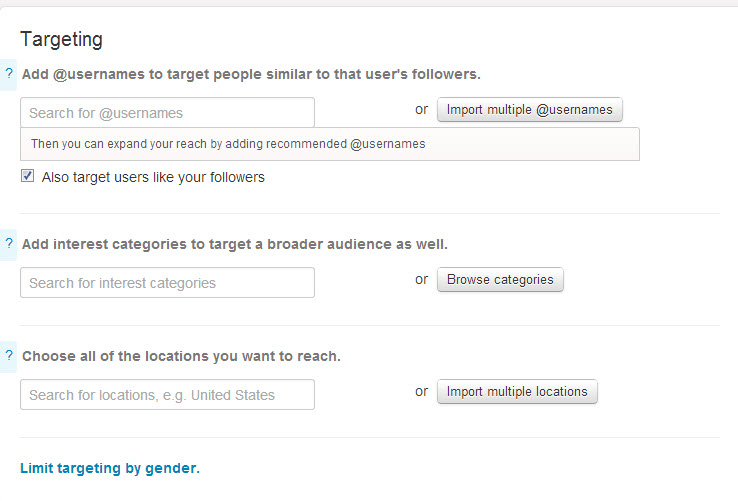 Let’s say you want to grow your Twitter audience by targeting competitors. You’d enter the competitors’ user names into the search box, or import them from an Excel file if you’ve already gathered them. That way, those users (and their followers) will see your promoted account when they log in to Twitter.

To cast a wider net, you can add interest categories. If your business offers home repair, for example, you can choose that from the list.

An example of adding interest categories to targeting options

Then, choose your location and save. Consider the location carefully — if you’re a local business, you probably don’t want to target the entire U.S.

For promoted tweets, there are more targeting options to choose from.

Keyword targeting is easy. If you’ve been using traditional PPC, you can even import your existing keyword list. Twitter uses the same match types as Google and Bing, making it even easier to understand. 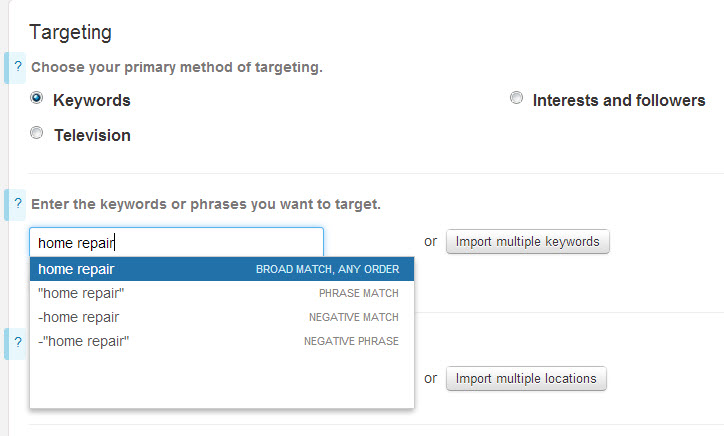 An example of importing multiple keywords

If you want to target hashtags, add those as keywords.

Targeting interests and followers is similar to the setup in promoted accounts: decide what users you want to target, and enter their user names.

Keep in mind that ads will also be shown to their followers, which may result in the wrong people seeing your ad. For instance, when I logged in to my personal Twitter account, I saw this ad. 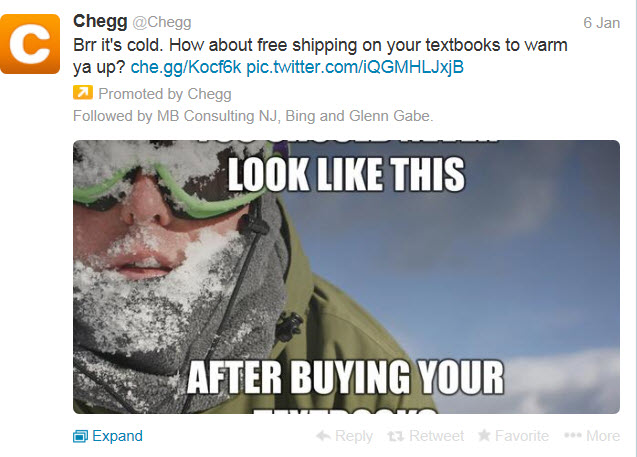 I haven’t bought college textbooks in a long time. This ad doesn’t apply to me. Either I was targeted because some people I follow also follow this advertiser, or because I follow some accounts related to my college and I live in a college town. The good news is, you only pay when someone engages: clicks a link in the tweet, follows you, replies, or retweets. But sometimes users will reply and complain about the ad – and you still pay. Be careful in choosing targeted users – you may want to look at their follower list before adding them to your targeting list.

Television targeting is an interesting feature that’s unique to Twitter. You can target people tweeting about a television show. If there is a TV show that’s relevant to your business, this is a good way to get real-time exposure to your prospects.

You can also target by city or state.

An example of targeting television users by geographical market

Most designated market areas are represented, so this is an option for both local and national advertisers.

You’ll also need to decide which tweets you’d like to promote. You can manually select them, or Twitter will do it for you.

In most cases you’ll want to manually select tweets. Like any PPC program, Twitter isn’t a “set it and forget it” medium. You’ll want to review performance and adjust accordingly.

New tweets can be promoted at any time – just click “Edit Campaign” and select them. Usually you’ll want no more than three promoted tweets active at any one time. You’ll oversaturate your audience otherwise.

Keep a close eye on your campaigns, especially in the first days and weeks. Determine which tweets are performing best. Edit targeting as needed. Adjust your bids.

With advance planning, Twitter ads can be an effective way to reach your prospects.