With less than two years online, U.K.-based Hollywood Mirrors has a good problem: keeping up with demand.

“I should have ordered more stock, instead of being cautious.”

Adam Watson, founder of Hollywood Mirrors, is the cautious type. It takes four to five months for new mirrors to arrive from his suppliers. And Marilyn, a popular mirror, was out of stock for more than a month. He paid heavily for his caution.

But with a new shipment of Marilyns arriving in May, and £30,000 in monthly sales on other mirror designs, Hollywood Mirrors remains profitable while learning its lessons in real time. Watson is now “doing a better job of keeping stock and juggling cash flow.”

And he has found a new supplier. This one can keep him stocked with the glam, consistently high-quality mirrors his customers and social-media influencers expect.

Watson isn’t new to ecommerce. He got his start selling clothing on eBay at the age of 18. “This was 17 years ago, and it was fantastic! I was hooked and got a buzz from every sale.”

“That’s when I got invited to sell on Amazon. I was one of the first sellers in the Home & Garden category when Amazon launched it. It was fantastic — 12 years ago with no competition.”

Within a year, online décor orders — from the branded website, eBay, and Amazon — were taking over. Those channels generated enough steady income to close the brick-and-mortar and take on outside interests.

“Mum is part-time now; she has her property business to run, and she’s taking a small step back and leaves me to it. She pays suppliers, does the admin, helps the team out, and even packs the orders. We make a good partnership; our talents suit each other. There aren’t many people who could work with their mum every day for 15 years.”

With Elaine taking a back seat in 2016, Adam identified the store’s highest-margin products and launched three new websites: Hollywood Mirrors, Decorelo (furniture and décor, redirected from Design55Online), and Ambient Mirrors (a wholesaler). Together these sites sold £450,000 (roughly $630,000) in 2017.

With plans to add other niche ecommerce sites in the next year or two, Adam is ready to share his lessons learned. 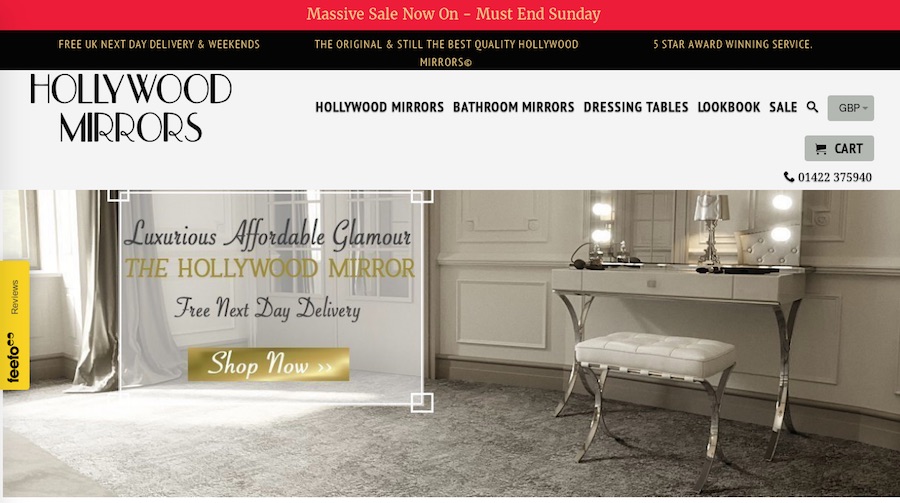 Hollywood Mirrors was one of three ecommerce sites launched by Adam Watson in 2016.

Marketing agencies did not perform. Adam hired one marketing agency after the other in the hopes of a magic bullet with marketing, search engine optimization, and pay-per-click ads.

“The results I got have been really poor, and I’ve blown thousands of pounds. I’ve used over a dozen agencies; I have not found one good one.”

Today he relies on individuals he finds on his own: “I headhunt for the job I want done at the time, someone with a great track record of doing what I want. Agencies can have one or two good case studies. But they may have a thousand clients. Working with freelancers, they just seem to care more. Their reputation and personal pride are on the line.”

Adam advises hiring a good bookkeeper or accountant. “And be sure to keep everything up to date, so you know the score. I have had major issues in this area; it drives me crazy.”

For example, in 2016 he discovered that the E.U.-imposed value-added tax hadn’t been paid for five years on his Amazon furniture sales. The resulting fees and penalties meant he had to liquidate the remaining store inventory to pay Amazon and start over.

“Eighteen years work just down the drain…” Adam said in a recent interview. “I think there’s quite a few people who have made the same mistake.”

“Invest in a system that will scale with your business, whether that be customer management, stock control, or accounting. Swapping stock-control software or an accounting system whilst you’re already trading is a nightmare,” Adam emphasizes.

It took him more than 18 months to change the company’s inventory control and accounting system. “We had 12,000 product lines at the time. It was painful, and staff morale was low.”

But now all staff members see the benefit of his transition to Brightpearl, a £4,500-per-year cloud-based back office for retailers and wholesalers. “It’s fantastic software if you sell on lots of different channels, as it integrates with most of them. It does everything: reporting, accounting, stock control, purchase orders, fulfillment, and shipping. It’s a huge time saver and automates a lot of our regular day-to-day tasks.”

Adam learned the hard way to make sure you have packaging figured out. “Our mirrors are branded and designed for us, and getting mirrors to the other end of the country safely is a whole new experience for me.”

Before finding his current packing solution, Adam estimates he lost around £30,000 in mirrors broken during transit. “No delivery company will ensure you for glass, so you have to take the hit.”

Now, thanks to double boxes padded with thick sheets of cardboard and polystyrene, breakage has dropped to less than 1 percent.

Adam’s first website, for the home décor business, ran on Actinic, a Europe-based platform. Four years later he moved to Magento, where he stayed for 10 years.

“I have to say I hated Magento. From a user experience, listing products took forever. It was overly complicated. It broke for no reason; any changes you wanted your developer to make would take forever and also break. It was just a very costly process. It cost a fortune to host also. I don’t know why I stayed with it for so long; there were not many other options out there.

“Then, when I launched my mirrors store 20 months ago, I thought ‘Let’s give Shopify a go.’ And it is fantastic. I am in love with it. It’s so easy to use, and the app store is fantastic; it never breaks, is reliable, and is cheap to run.”

Shopify runs all of his ecommerce stores. Adam’s wholesale site, Ambientmirrors.com, also incorporates the Wholesaler Shopify app, which “works OK — nice and simple, up and running quickly and cheaply.”

Adam has two favorite Shopify plugins. One is Chatra, a free live-chat software that “brings in a few sales every day.” The other is Privy, a free exit-intent pop-up that “improves conversions a lot. Automating an email sequence and sales funnel for everyone that signs up on [Privy’s] exit intent works really well — and drives sales we would not have otherwise.”

Adam recommends working only with manufacturers you can check in on. To find lighted mirrors at the best price, Adam first went to Alibaba, where he messaged suppliers for quotes and landed on one that seemed ideal.

“The first order from China was perfect. Then the second, third, and fourth orders were getting worse each time. It was so frustrating; the factory wasn’t taking any responsibility nor taking my feedback. So I hunted on Alibaba for another factory and found one. I also got an agent.”

Finding the agent was happenstance. While at the dentist’s office, Adam discovered that his dentist’s brother-in-law lives near the factory in China. So Adam hired him for quality control.

“He is experienced in manufacturing. He knew what to look for. The delivery arrived perfectly. I could not be happier! I am paying a bit more than before for the mirrors, but a huge headache is gone. Having someone you know and trust to check on quality is ideal when starting out with a new factory, especially in China.”

Tapping into social-media marketing is new for Adam. He uses Shoelace for retargeting campaigns on Facebook: “A really good return on your ad spend.” The campaigns target customers based on their prior purchases. 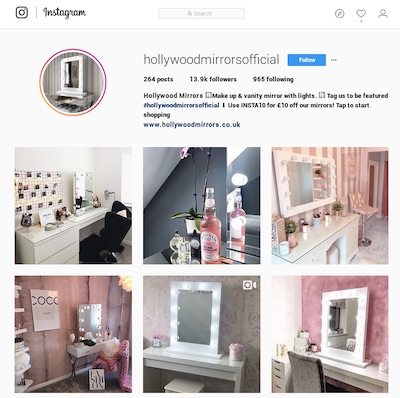 Instagram is another sales driver, thanks to targeted “influencers.” Adam ships a mirror to interested influencers, who post photos on their accounts. It’s a strategy used by many successful brands.

To get started, he found Instagram members with 15,000 to 100,000 followers who agreed to photograph his mirrors if they received one for free. Hollywood Mirrors’ staffers then repost influencers’ photos to the store’s own Instagram account. Posts are tagged with #hashtags of related topics, so everyone who follows those topics can see the photo.

“At the moment we are focusing on home and interior-design influencers, as they feature our mirrors more than celebrities do.”

Four months into this Instagram social experiment, “we get two or three sales a week directly from Instagram. It also helps with assisted conversions and brand awareness. ”

Adam also uses Sales Rocket, a Shopify app, to drive social-influence sales. Every time a sale is made, a pop-up announces that “[First name] from [location] has recently purchased [product].” The pop-up includes a small product photo. The principle is simple: people tend to buy what others have.

“We’ve definitely seen a conversion improvement since it was implemented a couple months ago. The app also has a scarcity feature for product pages. It shows how many people are viewing an item, how many have sold, and how many are left. If you’re running low on stock, this gives the shopper a nudge to purchase based on the fear of missing out.”

“Doing business-to-business is new to me. I’m realizing it takes a lot more effort than just phoning the retail store or emailing them to ask, ‘Do you want to buy my mirrors? They are cheaper than XYZ company,'” Adam states.

“There are two main wholesale mirror brands in the U.K. They are huge companies sending out 10,000 or more mirrors a week. I want to disrupt them.

“I am going to have to visit stores, show samples, have a fancy catalog, and have a better proposition. Much more than being a lot cheaper, I need to get the retailers’ trust. Once I have this, repeat orders will start to flow. The couple of stores that have taken the mirrors so far are doing really well with them. So maybe it’s now time to scale it and put a bit more time into it.”

Adam believes the biggest mistake he made while building Hollywood Mirrors was “not thinking big enough. I am fairly cautious and can procrastinate. I need to improve — to learn to fail fast and move quickly. And if I can’t find the answer, I need to find someone with a proven track record who knows.”

“I don’t regret any bad decision, as that is how you learn. But I probably could have learned faster. Shipping mirrors has proven difficult with breakages. We should have improved and tested packaging a lot quicker; it would have saved a lot of money, time, stress, and unhappy customers. We now have the packaging fixed, and the mirrors now arrive safely, which is great.

“The good decisions I have made were to focus on the marketing and be relentless — continuously optimizing and growing traffic, by 200 percent in six months via organic search, Instagram, and Google AdWords. Traffic from organic search alone has grown 286 percent in this time — just by being relentless in our public relations efforts.”