You’ve probably seen special characters in email subject lines before — those interesting little symbols that show up now and again in your email inbox. ­­They look like this.

How special characters appear in different email subject lines in an inbox.

These special characters go by many names: glyphs, ideographs, ideograms or sometimes, emoji. Most marketers just call them “special characters.” Whatever you call them, know that they’re not an image. Every one of them, from hearts to arrows, is just a symbol from the Unicode standard character set.

But do they work? Does using them in an email subject line increase opens, clicks, and other engagement metrics?

The answer is: sometimes.

The good news is creating them is very easy. There are a few resources on how to do that below. For now, let’s take a closer look at the evidence on whether you want to use them at all.

Penton Marketing ran an email test of four different subject lines, each going to 1,500 subscribers. Here are the results:

Results from a four-way test of email subject lines. The subject line with special characters won.

In this test, the subject line with special characters clearly blew the doors off all competitors. It won on opens, clicks, and registrations. 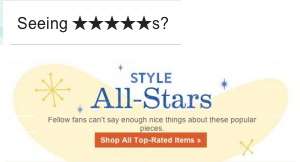 The email is from ModCloth and the example comes from Vertical Response.

This example actually breaks one of the “rules” of special characters: use them sparingly. The best practice is to use one special character per email subject line. At most, use two. But if you remember back to our prior example — the one with the 1, 2, 3 special characters — that also broke the no-more-than-two rule.

The use of stars here is also interesting. Quite a few retailers, like Think Fast Toys, Ulla Popken, and BBOS, use symbols, usually stars, at the beginning and the end of their subject lines. They’ve been doing it regularly over the last year, even as recently as last month. Typically, when they use stars, they put them before and after the text of the subject line. Several retailers have used this “bookending” with special characters over and over, so it’s probably working for them. 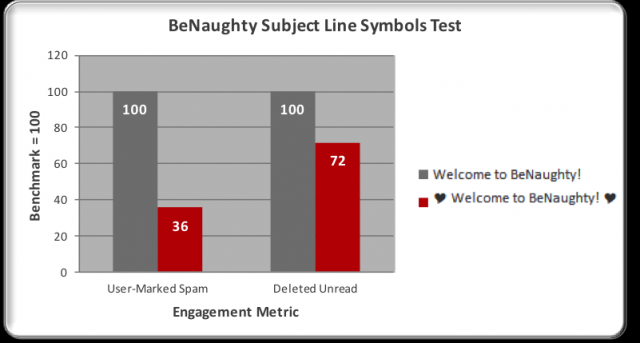 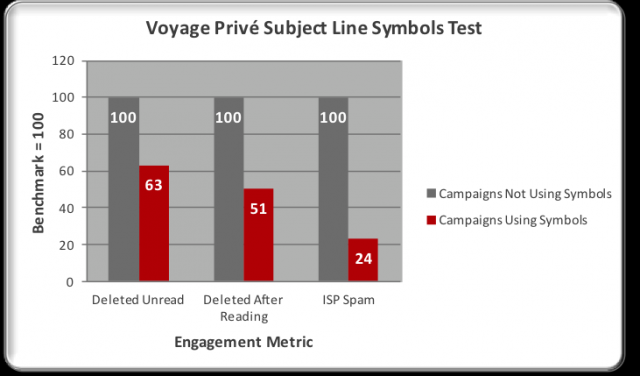 Neither Voyage Privé nor BeNaughty disclosed exact open rates or click-throughs for these emails, but the data from their email campaigns shows it’s a good idea to look beyond open rates when you judge whether or not special characters have worked.

Email marketers may see benefits from special characters — or any well-timed email message — whether a subscriber clicks or not. This is due to a phenomenon that Alchemy Worx, an email marketing firm, calls “The Nudge Effect.”

The nudge effect is when a customer sees an email message in her inbox, but does not click on it. She does not interact with the email at all, beyond reading the subject line. But fairly soon after — within 24 hours — she visits either the store or the website. In this case, the email has served basically as display advertising, except the customer saw the advertising in her inbox.

But don’t give up on them yet. Several email service providers, like Experian’s CheetahMail, have reported specific, positive results from using special characters. Again, to be fair, almost every blog post about special characters has at least one comment where another marketer tested symbols and found them lacking.

CheetahMail got specific with its special character data.

A 50 percent lift from the umbrella symbol is incredible. Who knew? That little umbrella could be an email marketer’s secret weapon.

Before you send out your next email with special characters, make sure you test how the email looks in all the major clients. Tools like Email on Acid or Litmus are helpful.

You need to see your email on as many clients as possible because not all email clients render special characters the same way. Gmail, Hotmail, and Yahoo render special character reliably, but smartphones — iPhone, Android, and BlackBerry — don’t always show what you’d like. Remember, 48 percent of email opens are now on mobile devices. 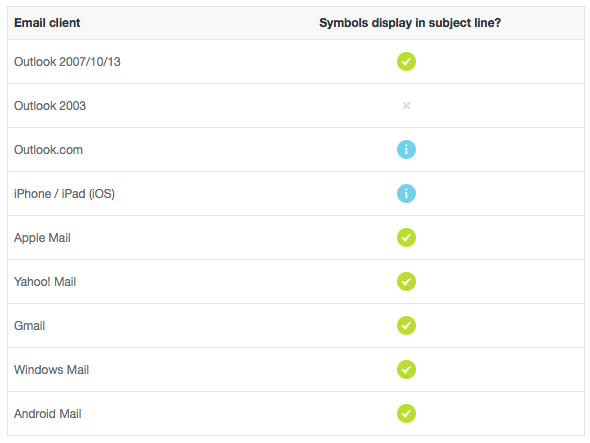 An overview of which email clients render special characters well.

Creating special characters is actually very easy, but some experience with HTML might be helpful. Again, test how your email looks in every possible email client.

Here’s a list of pages with symbols and the code you’ll need to create them.

As usual, the only way to know if special characters will work is to test them. Hopefully your list is big enough to let you send to two test segments, get a statistically valid result, and then mail to the rest of your list.

Most marketers will probably choose the simpler testing path:

Have special characters worked for your email messages? Which specific symbols seem to perform best?