An exceptional social media campaign can generate real results for a brand, whether the goal is to create buzz, promote a product, or raise awareness for a cause.

Here is a list of 10 outstanding social media campaigns from 2016. The campaigns include Snapchat lenses, Twitter sweepstakes, posting feet and ears on Instagram, solving riddles from clue posts, and lots of hashtags.

Wipe the wing sauce off your hands & RT now because you could win $250K! #EsuranceSweepstakes #SB50 pic.twitter.com/lm76bj4aMR

During the Super Bowl, Esurance turned to Twitter to run a sweepstakes campaign. Followers were invited to retweet one of the contest tweets for a chance to win $250,000. Winners were contacted on FaceTime, and their reactions were posted on Twitter. The campaign received 2.5 million hashtag mentions and 1.5 billion impressions.

To honor the 100,000th Disney wish granted globally, fans were invited to share images of Mickey Mouse Ears, or any creative ears at all to help grant wishes. Using the Share Your Ears photo frame on Facebook and the hashtag #ShareYourEars on Twitter and Instagram, followers generated a $2 million donation from Disney Parks to Make-A-Wish, with each post from users unlocking $5 of the pledge. The campaign ran from January 29 to March 14.

Knorr’s #LoveAtFirstTaste campaign combined a viral video with an interactive flavor profiler tool for followers to discover their taste compatibility with each other. Knorr asked 12,000 people in 12 countries what flavor means to them. Knorr found that roughly three in four people are more likely to be attracted to someone who enjoys the same flavors. The campaign was launched on April 25, with the video receiving over 7 million views in a day.

Microsoft’s #MakeWhatsNext campaign was launched for International Women’s Day, celebrating women inventors and how they’ve changed the world. A video was promoted on social media to spark the conversation. Followers could find out more at Microsoft’s YouthSpark initiative site, a nonprofit partnership for organizations, schools, governments, and other businesses to make more computer science education courses, trainings, and resources available.

As part of distiller Lagavulin’s “My Tales of Whisky” campaign with Nick Offerman, this video features over an hour of New Year’s Eve countdown as Nick Offerman slowly sips whiskey. This video is a follow-up to Nick Offerman’s “Yule Log” video, which presented Offerman sipping whisky by the fireplace in both 45-minute and 10-hour formats. Within hours of release, “Yule Log” went viral and was a trending topic on Facebook, showing that hilarity always plays well for the holiday. 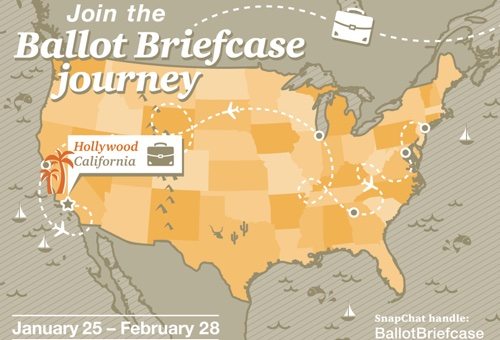 To raise awareness of PricewaterhouseCooper’s 82-year involvement in the Academy Awards, the accounting firm ran a #BallotBriefcase campaign, following the journey of the Oscar ballot briefcase as it travelled around the country, before arriving just in time for the awards ceremony. Celebrities joined the briefcase journey, generating buzz on Twitter, Instagram, and Snapchat. The campaign increased PwC’s impressions by 136 times on Twitter.

Two @Ghostbusters @Snapchat filters have been released and they are fantastic! Here’s the first! #WhoYouGonnaCall? pic.twitter.com/9q077R6qUY

To promote the summer release of the Ghostbusters’ reboot, Sony ran a sponsored lens campaign through Snapchat. The one-day campaign was the first on the app to use both sides of a phone’s built-in camera lens. Users could apply the Ghostbusters’ logo along with animated Slimer monster, proton-pack blast, and theme music to their video. Sony also partnered with ride-sharing app Lyft to offer free theme rides in New York, San Francisco, Los Angeles, Boston, and Washington D.C.

To create some buzz and earn credit among trendsetters, Jägermeister, the liqueur, created Undercover Games, a series of parties designed in the style of a conspiracy. No information other than date was revealed. Everything else, such as theme, dress code, and location, was revealed via stages of hints on Snapchat. First a teaser was sent, then initial hints, and, finally, location.

L’Oréal Paris leveraged its red-carpet beauty authority with the #WorthSaying campaign. Launched January 10, the night of the Golden Globes, the campaign encouraged women on and off the carpet to share words that are truly worth sharing. Spokeswomen Julianne Moore, Karlie Kloss, Eva Longoria, and Frieda Pinto, along with brand experts and social influencers, banded together as catalysts for change by putting forth their own words #WorthSaying on Twitter. The campaign also ran on television, billboards, banner ads, and videos. 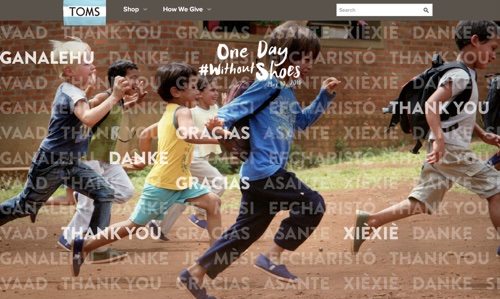 TOMS shoes is built on a one-for-one mission, donating one pair of shoes to impoverished children for every pair purchased. Each year, TOMS asks its followers to post a picture of their bare feet on Instagram with the hashtag #WithoutShoes. For every post, the company donates a pair of shoes to a child in need.

The initiative began in 2007, when students at Pepperdine University decided to go a day without shoes to raise awareness. Nine years later, the 2016 event engaged more that 3.5 million people on social media, with the #WithoutShoes hashtag producing 62 million impressions on Facebook, Instagram, and Twitter.