Tumblr is a fast growing social blogging platform suited to the creation of short form, multimedia content. It became so popular that Yahoo! just acquired the company for $1.1 billion.

Tumblr started six years ago as a place for creators to showcase their work and it retains that ethos today. Tumblr is a hybrid platform that could be construed as a cross between WordPress, Twitter and Pinterest. 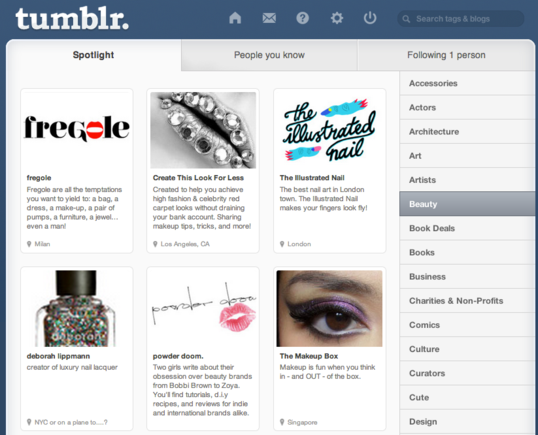 Reasons to Use Tumblr

While Tumblr users span almost every age range, the majority of users tend to be between the ages of 18 to 34. If reaching a younger demographic with your products is important, Tumblr is a platform ideally suited to that purpose.

Tumblr appeals to a younger demographic, ages 18 to 34.

Members of the Tumblr community frequently share content for use on their own blogs. Tumblr offers a feature called “Reblog” to make this easy to do. This means content can gain a wider audience than may be possible using other blogging platforms.

Users can also synch their Facebook and Twitter accounts so that posts get distributed to those social networks, making Tumblr a social media hub.

The Tumblr interface is much simpler than WordPress, for example, which means it can be set up quickly and put to use with little or no technical knowledge required.

Tumblr’s interface is easy to use.

Almost any type of content — photos, video, text, links, audio and even quotes — can be shared by simply clicking an associated icon and then uploading or entering the content. Tumblr offers email and mobile posting capabilities, as well. Apps are available for iOS, Android, and Windows Phone.

Tumblr is ideal for short form content — especially multimedia — which can be especially helpful to merchants who lack the time or resources to dedicate to writing long form blog posts.

On average, Tumblr users spend 15 minutes per user per session, which is second only to Facebook. Also, more than 14 billion pages are viewed each month, according to Quantcast.

Unlike Facebook, which focuses on socializing, Tumblr centers around content consumption. The ability to comment is not even included in the platform, though it can be added through the use of Disqus, a comment system.

Almost everything about Tumblr can be customized, including the design and domain name. Many themes, both free and paid, are available and further customization is possible by editing the CSS.

Tumblr facilitates the use of custom domain names and offers a step-by-step guide for how to do so.

Tumblr is free and users can create multiple blogs without occurring additional costs.

Tumblr continues to grow in adoption and averages 160 million users per month. Alexa ranks it as the 18th most trafficked website in the U.S. 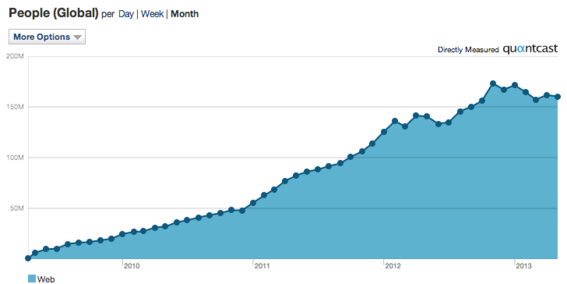 Tumblr continues to grow in popularity.

Tumblr’s most popular categories include fashion, art, crafts, food, vintage, and design, which makes it appropriate for retailers that offer such products.

A number of companies including Wazala, Shopify, and BlkDot even offer shopping cart capabilities for Tumblr.

I am not suggesting that Tumblr is suitable for every ecommerce merchant, but those that wish to appeal to a younger audience, have products that fit within the most popular categories, or who have a limited amount of time to create content should certainly consider utilizing what the platform has to offer.