Looking back at the year’s best marketing campaigns can generate ideas for your own upcoming marketing efforts.

Here is a list of 10 outstanding digital marketing campaigns from 2017. The campaigns include search hacking, viral retweets and replies, user-generated content on Instagram, Google hacking, success in failure, fake ads, and true news.

Wendy’s #NuggsForCarter Twitter campaign originated from a simple tweet from 17-year-old Carter Wilkerson, “Yo @Wendys how many retweets for a year of free chicken nuggets?” Though the current total of 3.6 million retweets fell far short of the 18 million goal, the found-campaign shows the power of truly engaged followers in social media. It also shows how, within social media, large opportunities can come out of small interactions. 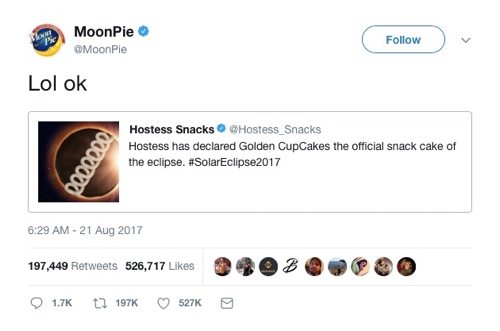 MoonPie, the maker of marshmallow-covered snack pies, was one of the most successful brands across social media in 2017. This was due to its modern, funny voice on Twitter. For example, when Hostess declared its cupcake to be the official snack cake of a solar eclipse, MoonPie quipped back, “Lol ok.” That simple tweet garnered over half a million likes and over a billion impressions across social media. MoonPie’s success stems from its authentic social interaction on Twitter.

On May 6, 2017, three champion marathoners (Eliud Kipchoge of Kenya, Lelisa Desisa of Ethiopia, and Zersenay Tadese of Eritrea) attempted to break the 2-hour marathon barrier. Nike and National Geographic documented the preparation and event, profiling the runners, their training, and the innovation behind the attempt. Although the runners fell just short of their goal, the inspiring work landed Nike nearly 600,000 mentions on social media, with the #Breaking2 hashtag used more than 400,000 times.

Eggo’s Twitter campaign capitalized on the immensely popular Netflix series, “Stranger Things.” The upside-down tweets engaged the show creators and fans in a funny and clever way, building on the show’s bizarre setting. The tweets were current and authentic, key elements of Twitter’s real-time platform.

MailChimp ‘Did you mean MailChimp?’

For the “Did you mean MailChimp campaign?,” MailChimp produced content for nine separate properties, all with names that sound like MailChimp. Three fake trailers were created for ridiculous movies — MailShrimp, KaleLimp, and JailBlimp. The WhaleSynth app was launched to create whale noise music. VeilHymn was an interactive music project that spawned a hit single and video. NailChamp was a platform for nail artists to battle for supremacy. MailChrimp and SnailPrimp were beauty platforms. And FailChip was a snack made from broken potato chips.

MailChimp also designed a paid search campaign so that each property eventually leads back to MailChimp. The indirect “Did you mean MailChimp?” campaign was a clever way to introduce the MailChimp brand to a new audience.

Can two strangers with opposing views prove that there’s more that unites than divides us? In its “Worlds Apart” campaign in the U.K., Heineken brought strangers together, divided by their beliefs. The pairs took part in team-building activities before their opposing viewpoints were revealed. Each pair then shared a Heineken and discussed their differences. The campaign’s primary platform was Facebook, using the hashtag #OpenYourWorld. The video received 3 million views in one week, 50,000 shares in the first month, and more than 14 million total views.

The New York Times ‘The Truth Is Hard’

The New York Times ran a national ad campaign asking, “How do we arrive at the truth?” The campaign was in reaction to the question of “fake news” that began during the Trump’s campaign for the presidency. The campaigned used current events to create a sense of urgency, driving engagement with customers. The initial television spot was aired during last February’s Academy Awards, followed by targeted advertising on social media and direct email marketing to increase subscribers. The YouTube version has been viewed nearly 16 million times.

Using the #ShotoniPhone hashtag, Apple invited users to share their iPhone photography on Instagram. Featuring the user-generated content, Apple later posted images on billboards. Apple also assembled clips into the “Earth” video, with narration by Carl Sagan from the book Pale Blue Dot – A Vision of the Human Future in Space.

Patagonia ‘This is Bears Ears’ 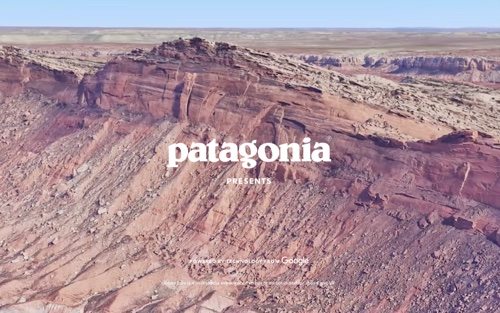 Patagonia “This is Bears Ears.”

Patagonia, the clothing company, and its founder, Yvon Chouinard, ran a campaign to save public lands from the U.S. government, in response to recent reductions to the Bear Ears National and Grand Staircase-Escalante National Monuments. Visitors were encouraged to reach out to the Department of Interior, with additional opt-in boxes to receive emails from Patagonia and text messages about protecting public lands. This campaign highlights the benefits of public lands for all people, to defend the places where Patagonia’s customers like to go.