Consumers often rely on the opinions of others when making purchase decisions. According to Zendesk, a customer service software platform, 88 percent have been influenced by an online customer service review when deciding what to buy.

That is why getting positive online reviews on sites like Yelp, TripAdvisor, and Angie’s List is vital, particularly as pertains to new customer acquisition.

From a consumer standpoint, negative reviews can adversely impact your business and can drive down your listing on consumer review sites, making it harder to find.

While no one wants to get negative reviews, they sometimes happen. Here are ten ways to deal with them should they occur.

Promptly responding to negative reviews shows the customer that you care and value their opinion. It may also be the catalyst that results in a person who had a bad experience with your business giving you a second chance.

Such was the case with Craig Jooste, owner of a Seattle-based painting company, WOW 1 Day Painting.

Jooste received an unfavorable review on Yelp due to problems that resulted from a Living Social campaign. He responded to the reviewer with an apology and even offered to reimburse the person for the amount paid to Living Social for the voucher. 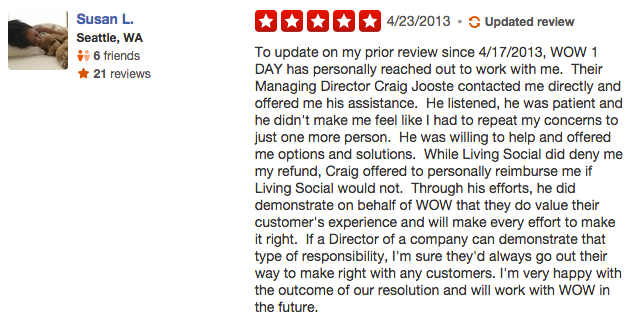 A Yelp user changed her review based on the business owner’s response.

As a result, the person revised her review saying, “If a Director of a company can demonstrate that type of responsibility, I’m sure they’d always go out [of] their way to make [it] right with any customers. I’m very happy with the outcome of our resolution and will work with WOW in the future.”

Depending on the problem, rather than respond to an adverse review by leaving a public comment, it may be better to reply privately via email or phone. For example, Yelp gives business page owners the opportunity to do so via email. If you resolve the matter to the customer’s satisfaction, leave a brief comment in the public timeline.

A negative review, particularly one that expresses a strong opinion, such as in the example below, may stimulate emotions that could lead to a sterner response than necessary.

Strongly worded review from a customer.

Take time to collect your thoughts and respond by saying something like, “Thank you for your valuable feedback. I would cherish the opportunity to speak with you about your experience. Please contact me at your earliest convenience.”

If, after talking with the person, you find there is merit to his comments, take proactive steps to remedy the situation. When warranted, provide restitution in the form of a coupon or discount.

4. Request That Defamatory Reviews Be Removed

Most consumer rating and reviews sites will not allow you to remove reviews. In the case of one that is defamatory or vilifying, request that the site take it down. Typically, you must claim your business listing before making the request.

In order to respond to reviews, you first need to know what customers are saying and where they are saying it.

Online reputation monitoring tools like Social Mention, Reputology, or Review Trackers can help. (Social Mention is free to use while the others are affordably-priced to fit small business budgets.)

Set up Google Alerts for your business name or use a site like TalkWalker, both of which send email alerts. Social media management tools such as Hootsuite or Sprout Social also have built-in monitoring capabilities.

Each consumer rating and review site has a particular way of filtering and ranking reviews.

Yelp uses an algorithm to recommend reviews its thinks will be the most helpful to the Yelp community based on three factors: quality, reliability, and the reviewer’s activity on the site.

Tripadvisor, a travel site that provides reviews of travel-related content, ranks businesses based on star ratings.

Chris Loomis, the owner of American Photo Safari, a sightseeing tour company in New Orleans, said that getting a four-star rating on TripAdvisor (as opposed to a five-star rating) can result in lower rankings.

“Four-star ratings hurt more than not writing a review at all,” said Loomis. “One four-star review drove my ranking down from fourth to seventh. In a competitive market like New Orleans, that was a harsh penalty.”

Fortunately for Loomis, most reviews are accompanied by five-star ratings. As a result, his business now ranks fourth out of a list of 455 things to do in the city.

American Photo Safari ranks fourth out of 455 things to do in New Orleans.

The best way to get positive reviews, said Loomis, is by providing an excellent standard of service. “Don’t just say that you provide good service, actually do it,” he said.

In most cases, people who leave negative reviews aren’t out to defame you. They merely want to express their opinion about the experience. Take such reviews on their merits, as they may reveal an area of your business that could benefit from improvement.

To offset the impact of a negative review, encourage customers to leave reviews. However, don’t attempt to influence them by asking that they leave only positive reviews. Yelp ardently discourages such practices.

Put signs, table toppers, or window stickers in your store or place of business for review sites that you want to promote. Add a note to invoices or receipts asking customers to leave a review. Place badges linking to review sites on your website. These are subtle ways to encourage reviews that may spur the customer to respond.

9. See the Good in a Bad Review

Negative reviews can benefit your business. If every review is positive and abounds with four- and five-star ratings, potential customers could become suspicious, feeling that the reviews are “manufactured” rather than being left by real customers. As paradoxical as it sounds, the fact that negative reviews appear can contribute to building trust, rather than diminishing it.

Make sure everyone in your company is aware of reviews you’ve received, both positive and negative. Not only will that help to ensure you prevent similar problems in the future, it builds a customer-centric mindset among employees.