Contest marketing seeks to give shoppers a positive retailer-related experience, create an affinity for the products a retailer sells, and collect information about shoppers that may help with future sales-oriented marketing campaigns.

The idea of giving away hundreds of dollars worth of merchandise and advertising may seem like an expensive proposition for small and middle-sized online merchants. But contest marketing can be an effective approach to acquiring loyal customers. What’s more, some product vendors will support contest marketing with free products to use as prizes or even advertising co-op dollars to promote the contest.

As with any marketing campaign, not all forms of contest marketing are equally effective. Here are three examples.

Perhaps the most basic variety of contest marketing involves placing a form on a merchant’s website and supporting that form with email, pay-per-click, and other types of marketing.

The keys to success include having a significant prize, communicating about that prize, rewarding shoppers for entering — even if they don’t win — collecting valuable customer information, and repeating this type of campaign often enough that some loyal shoppers will begin to look forward to these offers.

As an example, an online seller of western-related products gave away a pair of cowboy boots during a contest that ran from March 21 through April 4, 2012. The boots were valued at $199.99 retail and were part of a new line from the vendor, thus making them a prize worth winning. 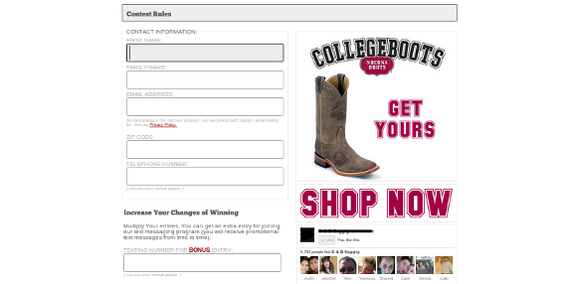 A retailer offers free boots as a prize. With a value of nearly $200, customers can be persuaded to provide significant information.

The contest form collected basic information about entrants and enrolled those entrants into the retailer’s email subscriber list.

Although entries were limited to one per valid email address, the retailer offered a bonus entry for joining a text-messaging list.

Entrants into the contest each received a $20 off coupon to purchase the boots — even if they did not win. In the end, many pairs of the boots were sold using this coupon, more than 3,000 shoppers entered the contest, and more than 2,400 signed up to receive text messages.

The retailer makes these sorts of contests an almost monthly event. In fact, a new contest starts May 1, 2012. This time entrants will receive a bonus entry for emailing friends about the contest or Liking the retailer on Facebook. 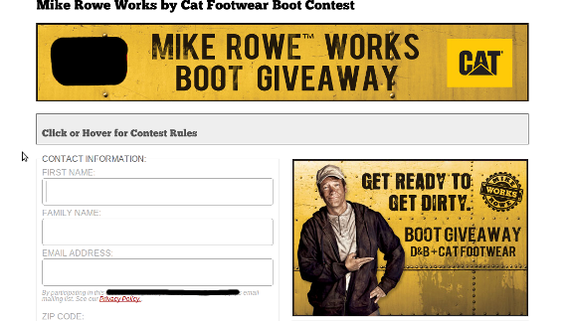 The retailer has a new and similar contest beginning on May 1, 2012.

Social media is the proper venue for building engaging customer relationships and putting shoppers ahead of the brand — customer first marketing.

PF Flyers, a shoe vendor, is doing just this with its Authentic American Style contest on Facebook. 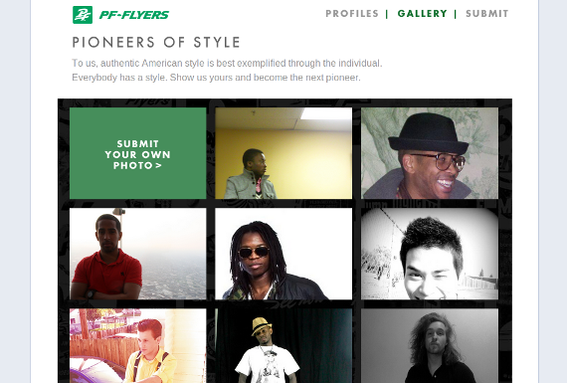 Each week from April 18 to May 30, 2012 a “Pioneer of American Style” is selected from entries on a custom Facebook tab. The entrants provide a style-themed photograph in exchange for a chance to win a pair of PF Flyers shoes valued at about $60.00. A single grand prize winner will be featured in a future PF Flyers advertising campaign.

Although the campaign is not yet complete, there are many entries in the Authentic American Style gallery, and the social driven contest has been mentioned in published articles.

Although text messaging is relatively new for ecommerce marketers, there are some indications that shoppers respond more readily to text messages than email and that because of the attention given to incoming messages, the medium could be good for promoting flash sales, wherein some items are offered a deep discounts.

Recently a farm and ranch vendor in the Northwest sent an email to subscribers offering an opportunity to win tickets to an upcoming Professional Bull Riding competition in exchange for joining a texting list. The tickets were worth about $40.00.

The campaign generated several hundred entries, and helped the merchant segment its email list thanks to location information gleaned from the incoming phone number’s area code.