Nearly 15,000 venues worldwide allow consumers to pay using cryptocurrency. This heatmap from CoinMap.org shows the distribution of those locations.

Blockchain technology offers much potential for ecommerce businesses. Payments, supply chain, and decentralized marketplaces are the three main uses, currently. But many more applications are in the works.

Recall that a blockchain is a “distributed ledger.” It records transactional data and stores it across many different computers. Combining transactions results in a “block.” Each block is linked to the block before and after it, thus creating a “chain.” Because the blockchain data is stored on multiple computers around the world, no single central authority controls the data, which gives blockchain the benefits of being secure, trusted, and for the most part unchangeable.

Large online retailers such as Expedia, Overstock, and Microsoft, as well as thousands of Shopify store owners, all accept bitcoin, opening the door to many more consumers. The benefits for merchants are low or no processing fees, no chargebacks, international usage, and quick setup. 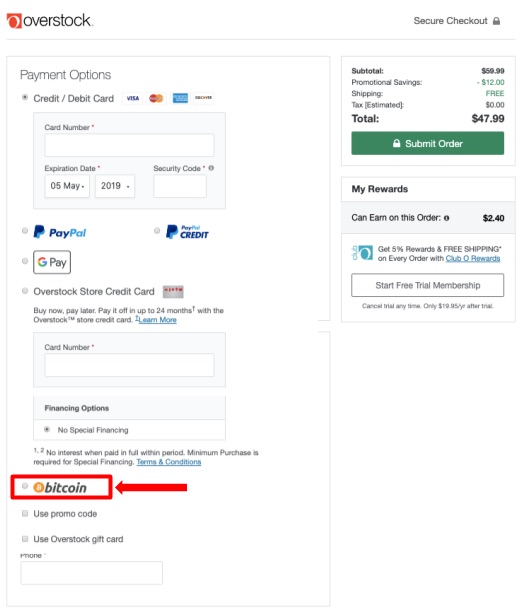 Overstock accepts bitcoin for payment, as does Expedia and Microsoft.

Accepting cryptocurrencies is now as simple as setting up an account with a bitcoin processor — BitPay and Coinbase are the main ones — and integrating it into your ecommerce site. (I have no affiliation with any of the companies mentioned in this article, other than a small volume of cryptocurrency trading through Coinbase.) For most merchants, the processor takes care of creating a cryptocurrency wallet for you to hold your funds and helps you convert your cryptocurrency to U.S. dollars (or your local currency). As with all things payment-related, merchants should consult their accountant and tax preparer to discuss their experience and comfort level with cryptocurrency payments and whether they have recommendations specific to the merchant’s business.

Supply chain. Reducing the cost and complexity of the supply chain has become a key use for blockchain. Many of the largest retailers have adopted blockchain for that purpose, or they are testing it.

Most of these retailers use the blockchain to eliminate the paper and manual work associated with international product shipping. For example, data from a bill of lading for cargo shipments can be manually placed on the blockchain at each stage of the supply chain or automatically entered, eliminating the lengthy and expensive administrative process of approvals and receipt guarantees. This allows all participants to track the shipment through its journey, verify the product information (such as pallet weight) at each step, and know that the data is accurate and trustworthy.

For smaller merchants, there can be similar opportunities for eliminating cost, but it may not be worth the effort to get your suppliers blockchain-enabled.

However, for merchants that sell unique items for which authenticity matters or higher risk products that may be tampered with or have expiration dates, the blockchain helps confirm the validity and quality of their inventory and reassures consumers that they are getting what they pay for. Provenance and Codex Protocol are examples of companies that help merchants implement supply-chain blockchain solutions.

Channel expansion. Blockchain and cryptocurrency have brought a wave of decentralization to ecommerce, creating marketplaces that allow anyone to offer products for sale. Many of these marketplaces focus on specific categories. Rare Bits is a marketplace for crypto-collectibles (one-of-a-kind digital goods). Wax is for virtual game items. More general marketplaces include OpenBazaar and BitBay.

Transaction volumes on these decentralized marketplaces pale in comparison to typical ecommerce volumes, and user interfaces for both merchants and consumers leave a lot to be desired. However, the marketplaces provide an option for merchants that are targeting a cryptocurrency-savvy community or want to expand their retail channel and appreciate a decentralized model.

Companies around the world continue to work on blockchain solutions for, as examples, loyalty programs, advertising, contracts, fundraising, and commercial lending. All trends point to all merchants — online and offline — benefitting from blockchain adoption.