4 Examples of Hashtags in Social Commerce

Hashtags are a staple among social media users as a mechanism for promotion and, more recently, payment.

Hashtags help to build communities around specific topics. They also serve as trackable referral links that unite people with brands and products. No longer limited to Twitter, they are in use across all major social networks. I’ve addressed hashtags here previously, in “Using Hashtags for Ecommerce.”

“Unlike social commerce campaigns that are linked to only Facebook, a hashtag-driven campaign brings in a social audience from any social network, multiplying the number of online consumers a campaign can reach,” said Kevin Bobowski, vice president of marketing at Offerpop, a social commerce platform, in an Advertising Age article.

Here are four examples of hashtag use in social commerce.

Amazon and Twitter have partnered on a social commerce project called #AmazonCart, which allows shoppers to use the hashtag #AmazonCart (#AmazonBasket in the U.K.) to purchase items via their Twitter feeds. 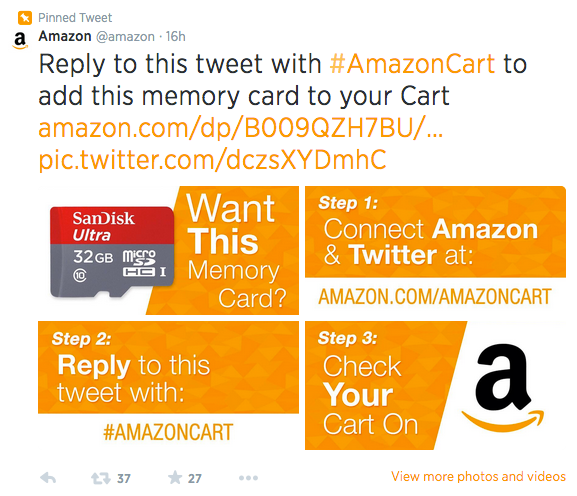 Amazon and Twitter teamed up to enable purchases using the hashtag #AmazonCart.

Twitter users who connect their accounts to Amazon can reply to any Tweet containing an Amazon product link with the hashtag #AmazonCart, and it will be added to their shopping cart for purchase later. Customers are not required to leave the Twitter feed. Once they go to Amazon, the product will be waiting in their shopping cart.

Amazon sends a reply tweet from its @MyAmazon Twitter account describing the status of the customer’s request — e.g., whether the item was successfully added to the Cart, if it was out of stock, or how the person can finish checking out later.

Social commerce platform Chirpify offers what it calls Actiontags, which serve, among other things, as a payment gateway to purchase products.

Via the platform, retailers associate particular hashtags such as “#buy,” “#want,” or “#newproduct” with Tweets. When a prospective customer sees a product in a Tweet that he wishes to purchase or has an interest, he replies using the hashtag. The platform then triggers a corresponding action based on the nature of the campaign. In addition to purchases, actions include such things as early access to products, free product samples, entries to promotions or sweepstakes, or access to premium content. 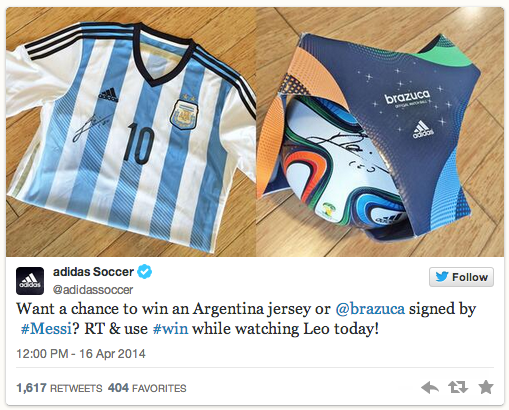 Adidas used Chirpify Actiontags in a special promotion during a soccer match.

Adidas Soccer used Chirpify’s platform in a social media campaign during a match between Barcelona and Real Madrid to instruct its Twitter followers to retweet using the hashtag “#win” for a chance to win a signed jersey or ball. Within a 24-hour period, the campaign experienced a 56 percent conversion rate, more than 2.5 million brand impressions, and a net gain of over 1,000 followers. 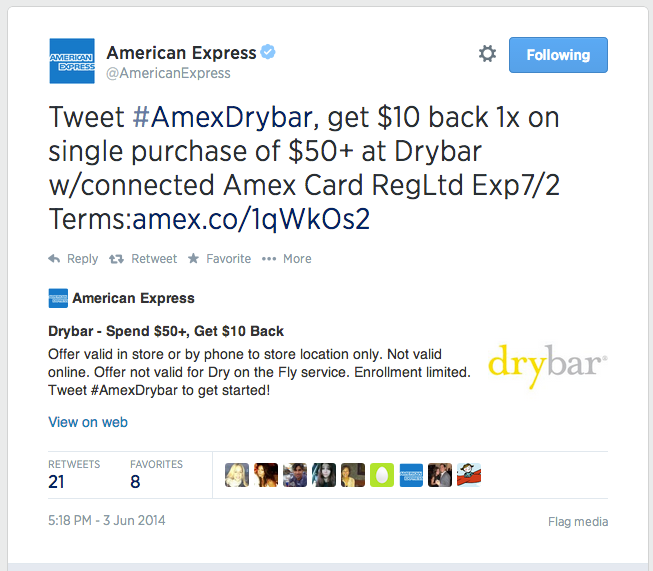 Cardholders first sync their cards with Twitter. When they come across products promoted via the Amex Twitter feed, they send out a tweet that includes a special hashtag. American Express sends an @reply message that contains a confirming hashtag, which the buyer has to use in a follow-up Tweet to secure the purchase.

“Based on the initial success of Amex Sync for offers, we know there is significant power in combining our assets with Twitter’s platform to bring value to Cardmembers and merchants,” said Leslie Berland, senior vice president, digital partnerships and development at American Express, in a press release announcing the launch.

Following this trend, in March eBay launched what it refers to as Smart Hashtags. 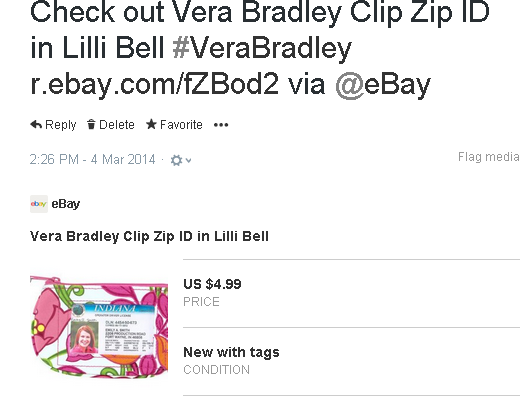 “Smart Hashtags come into play when an eBay visitor spies a product, guide or webpage they like and clicks on the share widget to share the item to Twitter or Pinterest,” said the eBay blog post announcing the feature. “A text box will immediately pop up with the page’s shareable link, a test phrase or product title, and one to three smart hashtags.”

eBay optimizes the hashtags to highlight relevant and searchable information for easier discovery. The company also sees it as a subtle, unobtrusive way of dropping commerce into social conversations. It now uses Smart Hashtags on the site.