Ecommerce sales are growing. Online sales topped $1 trillion worldwide for the first time last year and there are good reasons you should consider selling online now to start getting your share.

There are really two kinds of businesses or entrepreneurs that should be considering ecommerce opportunities right now.

What follows are four good reasons for these folks — small brick-and-mortar retailers or inspired entrepreneurs — to consider opening an online retail business now.

1. You Can Make Money Selling Online

comScore, the trend-tracking firm, said that in spite of “continued economic uncertainty, 2012 was a strong year for retail ecommerce. Throughout the year, growth rates versus the prior year were in the mid-teens to outpace growth at brick-and-mortar retail by a factor of approximately 4x.”

“It is clear that the online channel has won over the American consumer and will increasingly be relied upon to deliver on the dimensions of lower price, convenience, and selection,” said Gian Fulgoni, comScore chairman, in a release.

Finally, U.S. retail ecommerce sales represented 10 percent of American retail spending, excluding food, gas, and automobiles, in the fourth quarter of 2012. This is the first quarter in U.S. economic history that electronic commerce represented such a significant part of the total available market for retail consumer goods. 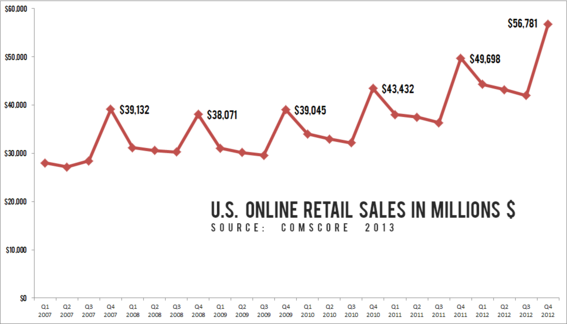 The fact that ecommerce is growing will not guarantee success for new online retail ventures. But is does offer an opportunity to make money selling online. Where opportunity exists, entrepreneurs can excel.

In 2012, Google worked with Ipsos OTX, a market research firm, to survey potential holiday shoppers about their 2012 holiday shopping intentions. One of the key findings was that 80 percent of the 1,500 shoppers queried would research products and prices online before they would make a purchase. Clearly the Internet is the engine driving retail.

Consider that 78.1 percent of the total U.S. population or approximately 245.2 million Americans are active Internet users, according to Internet World States, a usage and population statistics service. Your potential customers are already online.

The Google data indicated that 44 percent of the shoppers surveyed intended to make an online purchase and some 51 percent would look online before making a purchase at a brick-and-mortar store.

Given that customers are already online, looking for things to buy, ecommerce entrepreneurs do not necessarily need to build demand. Rather they need to access a large and interested market that already exists.

While selling success is by no means a given, it is an easier marketing task to service customers already in search of a product than it is to convince potential customers that they need something in the first place.

3. Mobile Devices Are the Next Retail Driver

About 28 percent of these mobile shoppers looked up product reviews, and another 27 percent compared prices online.

Forrester, the research firm, estimated in August 2012 that in just the next few years half of American mobile internet users would also be mobile shoppers, making online purchases directly from their phones or tablets. This could represent a four-fold increase in mobile commerce.

As a percentage of total online sales, mobile represents a relatively small percentage of transactions. But continued growth and adoption of the mobile Internet could represent a huge opportunity for small businesses.

Establishing an ecommerce business now gets entrepreneurs in on the ground floor of the forthcoming massive growth in mobile and online retail sales.

4. Starting an Ecommerce Business is Easy

Amazon, to further the example, started selling online in July 1995 after nearly a year of preparation. The company told initial investors that it would be at least five years before it was profitable. It lost hundreds of millions on its way to success.

In contrast, ecommerce entrepreneurs today can actually have an attractive, well-stocked, and successfully-marketed store up and running in a month or two with a relatively small investment.

First, there are a number of easy-to-employ ecommerce platforms, including hosted solutions like Shopify, Magento Go, Volusion, Amazon Webstore, or Big Cartel, and licensed solutions like Magento Community Edition, LemonStand, or even some WordPress themes. These solutions make it easy to have an attractive online shop.

Second, vendors are improving support for online merchants. Many distributors and manufacturers that would not even consider selling to online-only stores a few years ago are now catering to small, ecommerce shops. Some wholesalers will even drop ship for you until your sales volume merits inventorying products yourself.

Third, the sheer volume of Internet searches and consumer interests has made it easier to sell niche products. Put another way, it is hard to build a successful ecommerce business selling the same products that Walmart offers. But selling niche, licensed, or unique products that a big box store would never think to carry can be relatively simple thanks to the traffic that search engines can generate.