With over 3 billion videos viewed every day, YouTube is a great place for online merchants to find customers. However, there are many different ways to engage those customers.

Here is a list of innovative uses of YouTube by ecommerce merchants. Some provide product information; others deliver entertainment. There is one campaign that targets mobile customers. Finally, there is an innovation to sell merchandise on YouTube. 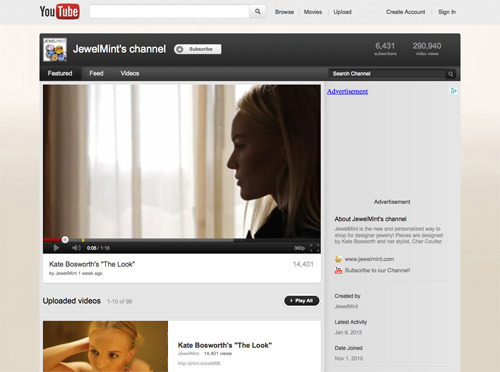 Jewelry-site JewelMint has launched an online video campaign called “The Look,” which stars actress Kate Bosworth and is directed by filmmaker Michael Polish. BeachMint, which owns the site, says the films will debut monthly on JewelryMint.com, as well as on the site’s YouTube and Facebook pages. Video storylines highlight the site’s jewelry collection. According to BeachMint chief marketing officer John Volturo, “We are always looking for ways to create fresh and exciting experiences for our customers and we feel these fashion films are reflective of that mission.” 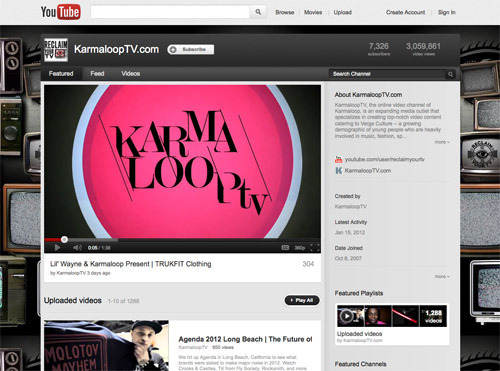 Karmaloop.com is an online retailer of street wear and urban fashion. Its 2011 revenue of $130 million is up 81 percent from 2010, completing an 11th straight year of double-digit growth. Founder and CEO Greg Selkoe credits much of that success to its video site KarmaloopTV and its YouTube video content. “We work hard to give our customers the brands and styles they want to buy, as well as the relevant and dynamic online video content that they demand. We remain as connected as ever to our audience through multiple channels and platforms, especially via social media. This close relationship allows us to be responsive to, as well as greatly influenced by, our customers.” 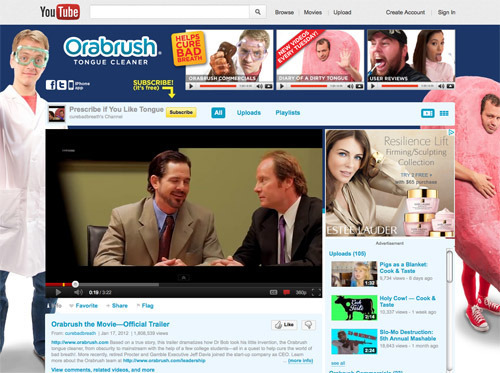 Orabrush is a tongue-cleaning product. While its YouTube videos are about bad breath, they are also hilarious spoofs and parodies. Its “Diary of a Dirty Tongue” is a weekly video about a dirty tongue named Morgan, who does everything from fall in love to give economic advice to President Obama. The site has nearly 175 thousand subscribers and 40 million channel views. 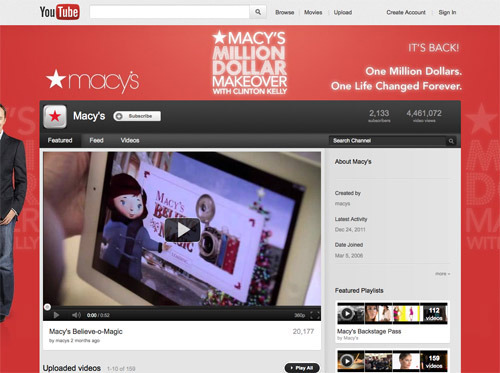 On Macy’s YouTube channel, the retailer features Macy’s Backstage Pass, a campaign of over 100 videos from fashion leaders such as Michael Kors and Rachel Roy. The videos can also be engaged on smartphones scanning QR codes at brick-and-mortar locations. Macy’s YouTube channel has over 4 million views. 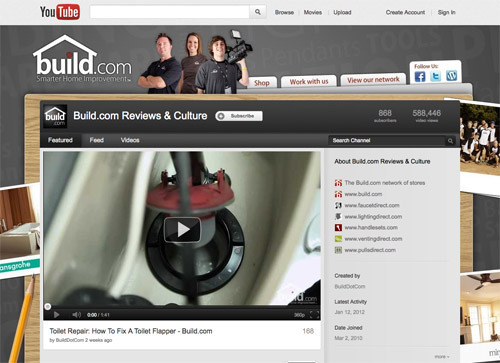 Build.com has produced Jacuzzi University, a collection of nine videos that cover the topics, features and options a consumer is presented with when shopping for a Jacuzzi tub. Available on Build.com and its YouTube channel, the videos are direct and to the point, never more than about 90 seconds long. “Instructional and marketing videos are common, but rarely do you find media that also targets shopping,” said Zak Kerns Jacuzzi brand manager at Build.com. “I looked at the sticking points our customers have while shopping Jacuzzi tubs, and used these as the framework for the video series.” 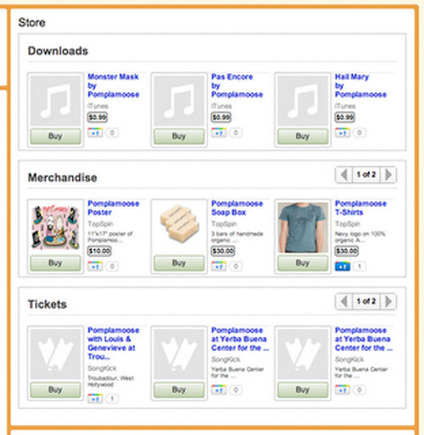 YouTube has launched The Merch Store, a tool allowing musicians to sell digital downloads, tickets, and branded merchandise directly from their YouTube channels. The company is partnering with several companies to offer the service, such as Topspin (merchandise), Songkick (concerts), and Apple’s iTunes and Amazon (music downloads).