Online video has gone mainstream. Thanks to sites like Hulu, Netflix, iTunes, and Amazon, more people are watching full-length movies and TV shows online than ever before. But no site has the video audience of YouTube.

Consider these facts, which are from YouTube’s Statistics page:

Not only that, YouTube is the 4th largest website on the Internet. It is also the second-largest search engine and is owned by the largest, Google.

Due to the immense amount of traffic, time spent on site, large search volume, and variety of niche video channels and categories from which to choose, YouTube offers a promising frontier for advertisers. The three forms of advertising best suited to small business budgets are:

When users arrive at a brand channel, the featured video plays automatically. When they then click on another video, that video will also play within the brand channel. Merchants also have the option of featuring other channels, playlists, video blogs and favorite videos.

Value Pet Supplies, a family-owned retailer of discount-priced pet supplies, runs a branded channel featuring a series of videos about Casita Big Dog Rescue, a non-profit organization that the company sponsors. Each of the videos is accompanied by a written description that includes a mention of the company, link to the website, and a coupon code or other promotional information. Using the YouTube playlist option, the merchant pulls videos from the Casita dog rescue channel, rather than produce videos of its own.

Video channels are offered at both free and premium levels. Opportunities for branding at the free level are limited, but do include the ability to select a color palette to match the brand, upload a company logo and custom graphic background. Premium channels offer more branding options but are typically outside the price range a small business could afford.

One of the reasons merchants should set up a branded video channel is to run YouTube Promoted Video campaigns, which is YouTube’s version of Google AdWords pay-per-click advertising program.

Just like sponsored ads on Google, YouTube Promoted Video ads show up in the right-hand column alongside contextually relevant videos that appear based on search results. Advertisers only pay when users click on the promoted video ad.

With YouTube’s InVideo program, advertisers select videos against which their ads will appear and engage users while they are watching the video. Ads overlay the video at the lower perimeter and both text and image ads can be used. Payment can be made on either a cost-per-click (CPC) or cost-per-impression (CPM) basis.

When a user clicks the ad, the video pauses. Based on which option the advertiser has chosen, a video ad, interactive Flash ad (limited availability), or a new browser window featuring the ad’s landing page appears. Once the user closes the ad, the video he or she was watching reappears at the point where it left off. In addition to overlay ads, advertisers can choose to run a companion 300×250 pixel interactive banner ad beside the video.

Both overlay ads and the accompanying banner ad can be easily created using Google’s self-serve Display Ad Builder, a Google ad-construction platform, located in Google AdWords. It allows small businesses with little-to-no experience to quickly and easily edit templates and fonts to create display banner ads and place them in YouTube videos. 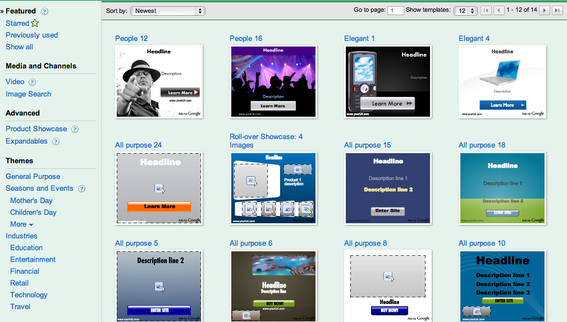 According to Business Insider, a magazine for business professionals, InVideo ads are purported to be the most effective form of YouTube advertising, with click-through rates that are 8 to 10 times higher than other ad formats.

YouTube InVideo ads are tied to Google’s AdWords program. Therefore, to use the ads, merchants must have an AdWords account.

Merchants can create InVideo ads via the AdWords administrative console, but an easier method is to use YouTube’s Video Targeting tool, an administrative dashboard designed to aid advertisers in selecting the most highly targeted videos on which to place ads. Using the tool, advertisers can choose a variety of targeting options that include keywords, YouTube channels and categories, or audience demographics. Once targeting options have been selected, the tool provides the option to seamlessly export the data to the user’s AdWords account for ad creation.

Through the use of branded video channels, Promoted Video and InVideo ad campaigns, YouTube offers an avenue for ecommerce merchants to easily and affordably build their brands, gain subscribers and drive traffic to their websites.