The development of autonomous drone technologies has surged in the last five years. The new rules anticipate a commercial drone industry in the U.S., particularly for package deliveries and last-mile logistics. “These final rules carefully address safety, security, and privacy concerns while advancing opportunities for innovation and utilization of drone technology,” said U.S. Secretary of Transportation Elaine L. Chao.

Here is a list of companies spearheading the advancement of drone delivery. All are developing their drone delivery systems and services. Most of these systems are commercially available now in a limited form.

Wing, a division of Alphabet, launched in 2012. It offers a small drone and OpenSky navigation system for package delivery. Wing’s drone is designed to deliver small packages that weigh approximately 3.3 pounds or less. Customers do not interact directly with the delivery drone. The aircraft hovers around 20 feet above the ground and lowers the package to the ground slowly, attached to a tether. The first company to receive Air Carrier certification for the FAA, Wing has conducted more than 100,000 flights across three continents.

Partnered with FedEx and Walgreens, as well as local businesses, Wing saw a sharp increase in demand last summer, due to the pandemic, with many stay-at-home consumers. Wing is currently operating in four locations: Christiansburg, Virginia (U.S.), Helsinki (Finland), and Canberra and Logan City (both in Australia). 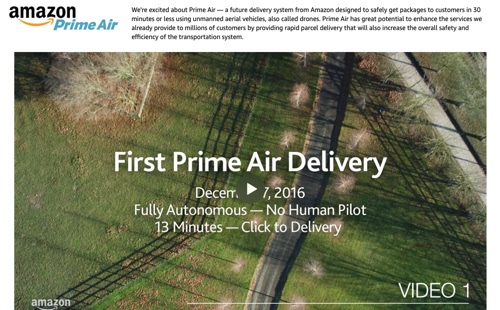 Prime Air will deliver packages up to 5 pounds in 30 minutes or less using small drones. Amazon has been developing and testing the platform through Prime Air development centers in the U.S., the U.K., Austria, France, and Israel. In August 2020, Amazon received approval from the FAA to operate its Prime Air delivery drones to “safely and efficiently” deliver packages to customers.

In 2019, at the re:MARS conference, Amazon unveiled its latest Prime Air drone design. Amazon was granted patents for its ground-based mobile drone fulfillment and maintenance carriers in 2017.

UPS Flight Forward was the first company to get the U.S. government’s full certification to operate a drone airline. In 2019, UPS Flight Forward teamed with Matternet, an autonomous drone logistics platform, to deliver medical supplies to WakeMed hospital in Raleigh, North Carolina.

In 2020, UPS Flight Forward and CVS partnered to deliver prescription medicines from a CVS pharmacy to The Villages, Florida, the largest U.S. retirement community, home to more than 135,000 residents. UPS has also partnered with Wingcopter (below) to develop a next-generation of package delivery drones for various uses in the United States and internationally. 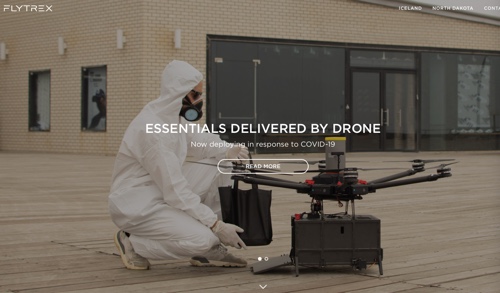 Started in Israel in 2013 as a supplier for drone manufacturers, Flytrex became one of the first commercial drone operators, delivering groceries and other goods in Reykjavik, Iceland. Flytrex also has test programs in North Dakota and North Carolina. In September, Walmart announced it would begin using Flytrex drones as part of a pilot program in Fayetteville, North Carolina. 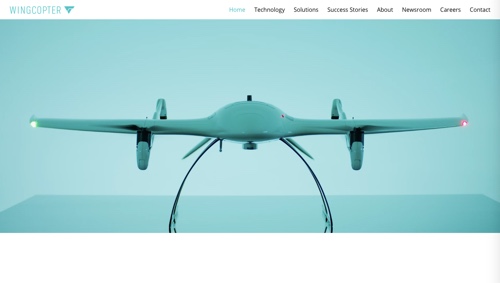 Wingcopter provides drone services for commercial and humanitarian applications, including medical air services, drone operators, and logistics companies. Based in Germany, Wingcopter is developing delivery options for postal services, retailers, and ecommerce platforms to integrate into existing supply chains. Wingcopter began as a manufacturer of drones, but it now offers drone delivery-as-a-service as well.

Wingcopter has already operated commercially in a few international markets, including Vanuatu in the South Pacific Ocean in partnership with Unicef for vaccine delivery to remote areas and in Ireland, where it completed the world’s first delivery of insulin by drone beyond visual line of sight.

The company has just completed a $22 million Series A funding round, led by Silicon Valley-based Xplorer Capital, as it prepares to enter the U.S. for FAA operational certification and drone productions. 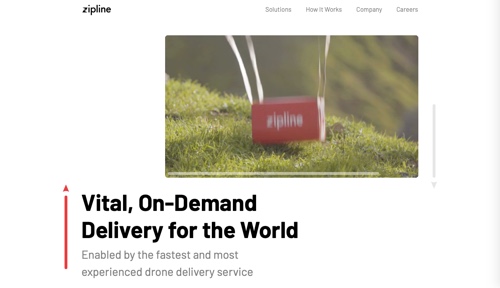 Founded in 2014, Zipline delivers critical and lifesaving products, completing nearly 100,000 commercial deliveries so far. Zipline is based in San Francisco and operates from distribution centers placed at the center of each service region. It hires and trains local talent to oversee flight and fulfillment operations. Zipline’s mission is to provide every human on Earth with quick access to vital medical supplies, believing drones offer a transformational change in logistics.

DHL Parcelcopter is an autonomous drone that can carry a payload of up to 4.4 pounds and travel at speeds of around 43 miles per hour. In 2013, DHL Parcelcopter made its maiden flight, transporting a small parcel weighing 1 kg from the east bank of the Rhine River in Germany to DHL’s corporate headquarters on the west bank.

In 2016, during a three-month trial, private customers in the Bavarian ski resort of Reit im Winkl and on the nearby Winklmoosalm mountain were invited to initiate automated shipment and delivery by Parcelcopter. This resulted in 130 deliveries between the locations, each within 8 minutes of take-off, a trip that takes 30 minutes by car in the winter.

In 2018, DHL Parcelcopter 4.0 was used as a rapid response service to deliver medicines in East Africa. Over a six-month period, it completed the 37 km flight from the mainland to an island in 40 minutes on average. Over 1,360 miles were flown, and roughly 2,000 flight minutes were recorded.

Boeing is focused on larger unmanned cargo air vehicles as it continues to test its autonomous flight technology. Boeing is also funding drone projects through its Boeing Horizon X Ventures, such as an investment round for Matternet, the drone logistics platform.