A Lender Or Borrower Be Is Prosper.com

The increased difficulty for people and small businesses to acquire decently priced loans, or loans at all, created a vacuum in the money business in recent years. Chris Larsen, the man who gave us E-Loan.com beat Mother Nature to the punch in filling the void.

It occurred to him that the eBay model could also be used in the money business. Folks with loan needs, having their needs met by various citizen lenders bidding for their business. 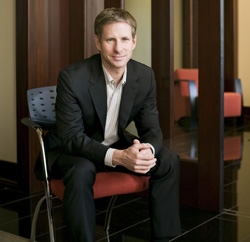 LARSEN: We saw the success of eBay for goods and services and we thought, there should be an eBay for money. But when you start getting into the money product it gets pretty complicated, lots of regulatory issues and other problems. But it looked like there was a place in the market to build a sort of eBay for money.

Essentially, Larsen was going into the banking business, or more accurately the loan brokering business. And just as essentially, the government, specifically state and federal regulators, would have something to say about the idea.

The typical ecommerce site has basically two worries, what the product is and how it is marketed. The rest is pretty much out-of-the-box technology. In Larsen’s case, before he could even think about marketing the fact that he had an auction site where someone could borrow or lend money, he had to develop virtually new systems. Larsen had it in his mind that, while this site was about money, it needed to be true to the free wheeling open marketplace that eBay was and is.

LARSEN: We started with the regulatory issues and developed a roadmap for where the technology would go. That was sort of the first essential red light, green light. Once we figured out the regulatory satisfaction then we could go with it and still be true to the open market concept that was eBay. Then we worked away at building the technology. We had to make sure it all worked, money transfers, fraud detection and safety. This is not a social networking site, it’s about money and the potential for bad things to happen, is much, much greater, so that to be layered in as well.

Larsen observed, quite correctly, that in the finance world there is no such thing as a Beta site. Either it meets the standards and works or it doesn’t. So if you can’t do a Beta site, what do you do? Launch when you think you are ready and hope for the best? Larsen borrowed a page from the restaurant business — a soft, limited opening.

LARSEN: We did a friends and family three month trial period (the site was closed to the general public). We had about 300 people we knew who would trade amongst themselves. It was a little more controlled environment, but still a little more open than just doing your own quality control. That was an important three months and we learned some things. We made some changes and finally decided to go. But even once we opened to the public, we didn’t market heavily. It’s better to let users use it, with those first crucial months as learning periods, finding the holes (and fixing them) before you really go out big. Frankly, even a year out, we’re only just becoming comfortable with the idea of a big marketing campaign. But, you know, financial sites have to be rock solid, and very secure, it’s a whole different thing than the entertainment/social network.

Once you get past the regulatory and technology issues of creating an auction site for money, the Prosper.com business model is not complicated. Very simply, any American (U.S. Citizen) with $50 or more to invest can become a lender and a citizen who needs cash can put up a listing for a loan at fairly standard market rates. If you borrow, say $1000, the whole $1000 won’t come from one source.

LARSEN: So it is likely that the thousand dollars will come in $50 to $100 increments from 10 to 20 lenders. That way, lenders can sort of spread their money around and have a portfolio of many small loans rather than have one big loan, which is riskier.

Even in their non-marketing mode, Prosper has almost a half million people lending and borrowing. There are people in the short history who have borrowed and paid back more than once, and in some cases have become lenders themselves. With all this money flying around, how does Prosper make its revenue?

LARSEN: We charge a transaction fee. Once a loan listing is matched, we charge between one and two percent. We also administer or service the loans for lenders for which we are paid between a half and one percent.

The typical borrower on Prosper is someone who is looking to pay off credit cards and that is a primary market Larsen and his team are pursuing. The other niche is people starting small businesses. And the lender is:

LARSEN: Middle America. Pretty much anyone who is looking for a different kind of asset. We have had a couple of hedge funds that are participating and we welcome that.

It could be said that Prosper is a place of last resort for borrowers, those who can’t cut it in the normal financial channels come to the auction. But Larsen says that while there may be some desperation among those listing loan needs, those loans that actually fund are pretty solid.

LARSEN: It’s a free and open market and anybody is free to make a listing for a loan and we don’t charge for listings. We believe very strongly in keeping it free and open. But when you look at what actually funds, only about 7 to 8 percent are sub prime. About 92 percent of the loans are in the so-called sweet spot of credit cards, with people who have options to borrow elsewhere.

While Prosper has done quite well by any standards in its “pre-marketing” mode, Larsen says that Prosper will launch some added marketing efforts in the near future.

LARSEN: We’ll do some things to generate loan listings so our investors can have good choices. We’ll use a variety of traditional and viral marketing.

While Prosper can certainly be called cutting edge in the financial markets, Larsen is comfortable with where he is and where the whole ecommerce industry is.

LARSEN: I think the Internet is the way people are conducting all kinds of things in their lives. I think the technology is there, the security is there, it is very mainstream now and I think we really just beginning. When it comes to security, we’re in a pretty good place right now. People can rely on the Internet; we’ve made a lot of strides. The data show that even on ID theft that most of it takes place offline. Actually some people say online banking, for example, is safer because the bank statements don’t sit in the mailbox to be stolen, which is where a lot of ID theft happens.

For a company still sort of feeling its way into the online financial world, Prosper.com has made huge strides. Two percent of $92 million isn’t a bad year’s revenues for a company that has yet to launch a real marketing campaign. The lessons learned are easy to decipher. Do your homework, plan well, test and adjust.