Online affiliate marketing is still in its infancy. Many trace the channel’s roots to the mid-1990s, when several retailers developed platforms that would track third-party online referrals and would award sales commissions on completed transactions. The concept of commissionable transactions was not new. Recall “Avon calling” and door-to-door encyclopedia salesmen. However, when translating that model online, new issues arose.

The lack of geographical boundaries brought into question tax nexus in the U.S., and marketing rights in foreign countries. The lack of face-to-face transactions forced a reexamination of disclosure requirements. And these issues are still being discussed today. We have not yet seen typical legislation associated with a more mature industry. As such, here is a brief overview of three legal issues that retailers with affiliate marketing channels should consider, follow, and understand.

I am not an attorney. The issues presented below are not legal advice. Consider them discussion points to have with your own counsel.

Prior to the Internet, sales taxes were levied on companies that maintained a physical presence, or nexus, within a state’s borders. However, the advent of ecommerce enabled retailers to sell products to state residents without collecting and remitting taxes back to that state, or county, or city.

This was initially a minor issue for the states and local governments, as ecommerce was a relatively small portion of overall retail sales (and sales taxes). But ecommerce is now big business, and states and local governments are feeling the impact of declining sales taxes that were previously remitted from local, brick-and-mortar businesses. Thus, legislators in many states are proposing bills that proclaim affiliates as an extension of a merchant’s sales force, thus satisfying the physical nexus requirement for taxation, to bolster sales tax revenue.

Active legislation in one form or another exists in the following states: Arkansas, California, Connecticut, Georgia, Iowa, Kansas, Maine, Minnesota, Missouri, New York, North Carolina, Pennsylvania, and Rhode Island. If you have affiliates in these states, you should review state nexus definitions to determine whether you are required to collect and remit state sales tax. 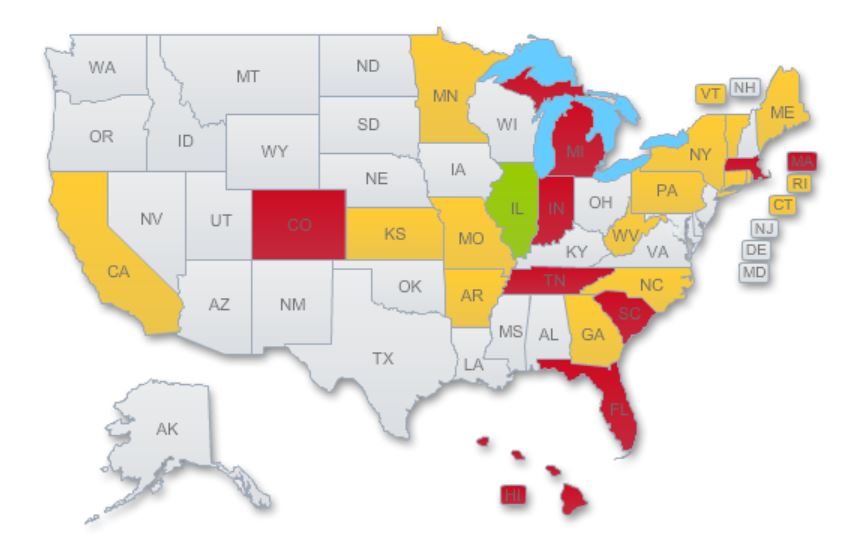 To learn more about the affiliate nexus issue and keep abreast of developments, go to Performance Marketing Association, which is a non-profit trade association founded in 2008 for the affiliate industry.

In 2013, the U.S. Federal Trade Commission updated its disclosure-of-advertising guidelines to include blogs and social media. The guidelines state that if a blogger or social media maven receives any sort of monetary or product incentive to promote a brand, product or service, then he is required to disclose that relationship. This means that any affiliate that drives traffic your way via a blog or social media post must adhere to these guidelines. However, the penalty for non-compliance seemingly impacts the retailer more than the affiliate. This last point can be illustrated by a 2011 ruling that found Legacy Learning Systems, a provider of guitar lessons, guilty of deceptive advertising when certain of its affiliates falsely posed as ordinary consumers or independent reviewers. The fine was $250,000. (See “Enforcing FTC Advertising Disclosures for Blogs, Social Media,” my previous article, for more.)

The current guidelines emphasize social media posts and state that a limited character count is not a valid defense for excluding disclosure. The revised guidelines also state that disclosure must be “clear and conspicuous,” and disclosure within the body of a blog post is insufficient, as any content prior to the disclosure could distract consumers and cause them to click away before finishing the post.

In July 2014, Canada’s Anti-Spam Legislation will go into effect. It is considered by many to be among the most aggressive anti-spam email laws in the world. It provides a very strict definition of “implied consent” to determine whether it is legal to email a consumer who has not specifically requested it. According to Mohammed Ahmed, director of email deliverability for AWeber, an email service provider, consent can be implied if there is an existing business relationship, which can be established if one or more of the following conditions is satisfied.

Consent can also be implied if there is an existing non-business relationship as defined by a gift or donation made, and the sender is a registered charity, political party, organization, or political candidate.

What is uncertain is the impact of Canada’s legislation on non-Canadian retailers. Regardless, it is an issue to follow, especially if you consider Canada part of your potential target demographic. Read more at Fightspam.gc.ca.