Paul Chaney, a Practical Ecommerce contributing editor, first described Buffer in an April 2013, article, pointing out its timesaving features. Here, I am going to describe the four Buffer features that I use most. These features, as an example, helped fuel a 16.5 percent increase Twitter followers in a little more than three months for my @ecommerceboy Twitter account.

Buffer offers extensions for the leading browsers. These extensions add a small bookmarklet that lets users share content from nearly any site to all of the aforementioned social media networks.

Buffer, as its name implies, schedules the posts so that marketers may provide followers and fans with a steady stream of entertaining and engagement content released when you want it to be released.

I use this Buffer tool constantly. As I find interesting articles online, I add them to my Buffer. For example, recently Kunle Campbell posted an excellent article, “10 Essential Google Analytics Dashboard for Ecommerce,” that is certainly worth sharing. You could click the Buffer bookmarklet to bring up a modal dialog. This dialog allows you to decide which accounts will share the post and lets you personalize the post message. You can even have a different, typically shorter, message for Twitter than you do for Facebook or LinkedIn. 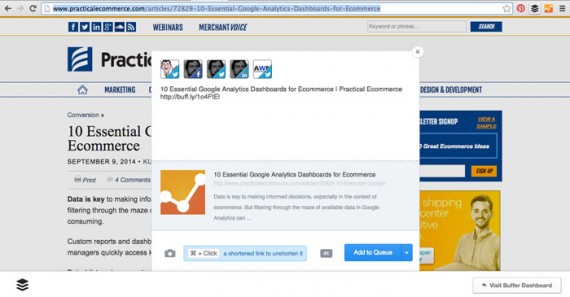 Use the Buffer bookmarklet to add content from any site.

You can also choose to add the post to your queue, meaning that it will take the next spot in your line of social shares, or you can post it immediately.

Unlike an automated service that blindly posts everything in a particular RSS feed, Buffer lets you decide which posts are shared and which RSS posts are ignored.

This is particularly helpful if you want to share posts from a feed that includes advertisements, without endorsing those advertisers. 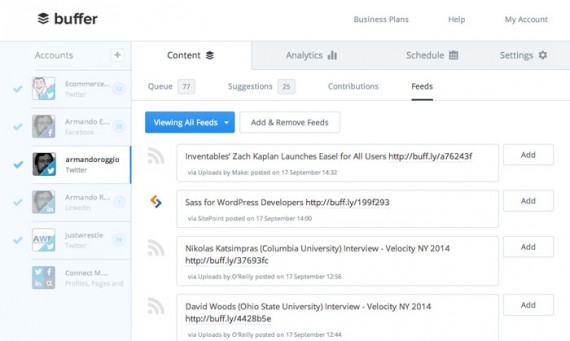 Buffer allows up to 15 RSS feeds per social media account.

Perhaps the best way to use the feeds is to review each one before you post it. As an example, I frequently open interesting-sounding feed items from the Buffer feeds tab in a new browser tab, read the article or at least the first few paragraphs before deciding if I want to share it or not.

For most social media accounts, Buffer will provide a list of 25 suggested links each day. Many of these suggestions will be closely aligned with the sort of content that you typically post, but don’t be surprised if you also find some items that may not apply — no one’s perfect. 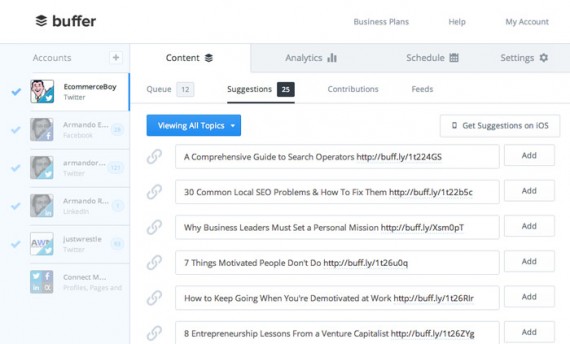 Buffer makes 25 content suggestions each day for some accounts.

As you read down the list of daily suggestions, open anything interesting in a new browser tab, and take a few minutes to review the post. As you read the suggested posts, you can either return to the suggestions tab to add the item to your Buffer, or you can simply use the Buffer bookmarklet.

As I was writing this article, Buffer’s suggestion for my ecommerce-related Twitter account, included an article about search operators, a post about 30 common local search-engine-optimization problems, and two posts about staying motivated.

The first three features mentioned above focus on ways of posting or discovering good content, but just blurting out post after post won’t win over fans and followers, it will annoy them.

Buffer lets users set up daily schedules, so that on weekdays you can post 15 times throughout the day, but lighten up a bit on weekends, or something similar.

I found that it worked better not to post articles or videos directly on the hour, on the half hour, or even on the quarter hour, so that a posting time like 9:23 a.m. would generally do a bit better than a post at 9:30 a.m. or 9:15 a.m.

One way to measure which post times might work best is to use each social network’s own analytics tools. For example, look at the Twitter analytics report for your account. Look for top performing tweets, and chart when those tweets were posted. If you start to see a trend, consider adjusting your posting schedule in Buffer to see if you can increase the number of top performing tweets.

Remember that while tools like Buffer can make it much easier to find and share content, it is the content that ultimately attracts a followings. Marketers are often most effective in social media when they genuinely seek to add value to the social conversation.