For content marketers, a well-written lede can be the difference between stunning success and abysmal failure. The lede can attract and engage customers or leave them yawning as they click to a competitor’s site. So understanding the lede is important stuff.

In literature, journalism, and content marketing, a lede is the first paragraph of a written work. Its purpose is to both inform and entice the reader — explaining or summarizing what the article is about and making that topic seem interesting.

In terms of getting folks to actually read an article online, the lede is probably the third most important bit of content. The first is the headline. It grabs the reader’s attention. The second is the image, often a thumbnail, that supports the headline and attracts the eye.

After these, it is up to the lede to deliver, if you will, on the promises made in the headline. The lede is a point of commitment. The headline gets someone to click. The lede gets her to commit to reading the article.

Journalism professors emphasize facts and brevity. They teach their students to write information-rich ledes that tell readers precisely what’s going on, often in as few words as possible.

To accomplish this, journalists try to answer six simple questions in the lede.

As an example, here is the lede from a 2009 Associated Press story. This lede was called out on the Columbia Journalism Review as the “Lede of the Day” when it was first published.

MOSCOW — A Russian newspaper defended itself in a Moscow court on Tuesday against charges that it had libeled Josef Stalin by reporting that the Soviet dictator had sent thousands to their deaths.

This lede answers all five of the “W” questions.

Here is another example, also from the Associated Press. This lede was published on November 13, 2015.

SEOUL, South Korea — Eight men who had been held as slaves at South Korean salt farms for several years took the government to court on Friday for alleged negligence and police inaction they say largely caused and prolonged their ordeal.

Again, it is not hard to find the answers to the five “W” questions.

The journalist’s lede is all about hard news and providing the reader with the facts. From the content marketer’s perspective, this sort of lede works well for articles about events, product launches, or even how-to articles.

In contrast to the journalist’s lede and the five or six questions it answers is the so-called soft lede or feature lede. This lede often seeks to paint a portrait, if you will, of someone, someplace, something, or some event.

While it can certainly answer questions too, its aim is to show the reader or even engage the reader directly. Here is an example from the Urban Beardsman, the content marketing magazine for Beardbrand.

Someone wise once said that a suit can make you look stylish but a three-piece suit makes you look downright dashing. That wise person was me and whether or not you agree with the part about me being wise, you can’t argue with the fact that a three-piece suit has the ability to make any man look damn amazing. And now that fall is here it’s the perfect time to rock a three-piece and look like the man you were meant to be.

Notice that rather than answering the “W” questions about a newsworthy event, the author, Ryan Rosenkilde, speaks directly to the reader.

Beardbrand uses its content marketing magazine, Urban Beardsman, to engage customers. In this case, a well-written lede aids in that engagement.

Another example can be found on Mr. Porter’s Journal under the headline, “Why Night-time Is the Right Time, In New Orleans.”

‘Keep On The Sunny Side,’ that Carter Family folk anthem of American optimism, suggests why we New Orleanians are so misunderstood in our own country. Here in The Big Easy, natives hug the shady side of life. Gathering in pools of shadow beneath our wrought-iron balconies, we shake our heads as tourists slog through brutal midday sunshine across the street. In sweltering New Orleans, we know you needn’t fear darkness: It’s the sun that will kill you.

Perhaps you are immune to writer John Biguenet’s prose. But for many readers that soft lede exudes cool and engages the reader. As an aside, the article also helps Mr. Porter sell its goods, which is content marketing’s ultimate goal. 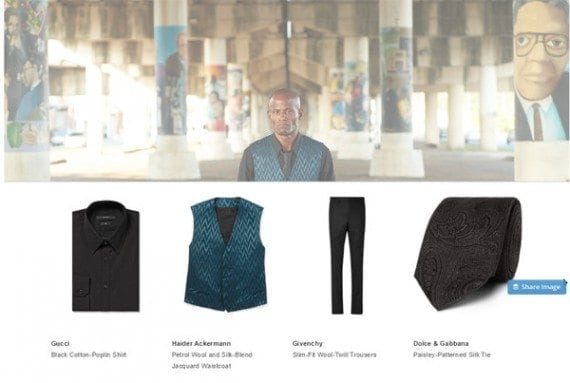 The Journal, which include many articles with compelling ledes, helps Mr. Porter sell its products.

What’s more, did you notice the continuity between the headline, again “Why Night-time Is the Right Time, In New Orleans” and what the lede described? That is a good soft lede.

How to Use the Lede

Think about how to use the lede in your own content.

Simply put, try to do a better job of drawing in your readers. Use the first paragraph to deliver on the promises you made in your headline. Aim to encourage your audience to keep reading. And seek out ledes. Look for them in the articles you read and enjoy.

Why Is Lede Spelled That Way?

Lede is jargon. It is a misspelling of the word lead that journalists use to describe the first or lead paragraph. Some folks think it is a bit of nostalgia harkening back to an age of linotype machines. But in the era of keyword searches on Google or Bing, it is nice to distinguish lede from lead.