The Microsoft, Yahoo! search deal announced in July still faces legal hurdles, but as more details have become available, it is clear that the companies’ combined search share has—for the first time in perhaps a decade—created some real competition for Google.

Depending on which poll or survey you favor, Microsoft and Yahoo! will control between 15 and 30 percent of the total search market right. And if historical data applies, the duo will generate better click-through rates, grow more quickly, and present different results than Google, the current search-engine king. And for these reasons, ecommerce marketers should reconsider how their businesses manage search engine optimization (SEO) and search-based, pay-per-click (PPC) advertising.

Video: Time To Optimize for and Market on Bing

Prepare for the Microsoft Decade

For the past few years, Google has been going after Microsoft. Gmail, Google Docs, Chrome, Android, and the recently announced Chrome OS were all assaults on Microsoft profit centers and apparent sidesteps from Google’s core business. I am betting that Microsoft, which has approximately $68 billion more in market capitalization than Google, more than double Google’s revenue, and roughly triple Google’s gross profits, will start to fight back. The Yahoo! deal is the first real salvo from Microsoft. Look for Bing, which will be the search algorithm for all Microsoft and Yahoo! sites, to release some impressive new tricks in the near future (Bing’s Visual Search is an early example). And don’t be surprised if 2010 is the beginning of the new Microsoft decade.

Competition breeds innovation, so for ecommerce marketers, I believe it is a good thing that Google, particularly where PPC is concerned, is getting some heavyweight competition. Earlier in the search engine advertising wars, too many marketers took sides, placing all of their advertising dollars and SEO efforts in Google’s basket. But as the Microsoft decade begins, it is important to remain neutral. Both Google and Microsoft have a lot to offer us in terms of search and search marketing, and I believe smart ecommerce marketers will use both.

I am the first to admit that until recently, when I thought about SEO, I thought about optimizing for Google. It was the only search engine that mattered, and, for the most part, all other engines followed Google’s lead.

As an example, try searching for “golf clubs” in both Google and Bing. For me, the Google search showed Worldwide Golf Shops, an online store, as the top result (preferences could be influencing this, but you get the idea). But on Bing, Worldwide Golf Shops was listed 12th, which put it on the second page of results. Clearly, there is something different about the Bing algorithm, and if I were the marketing guy at Worldwide Golf Shops, I would be scrambling to figure out what that difference was before Microsoft gobbles up more of the search market. 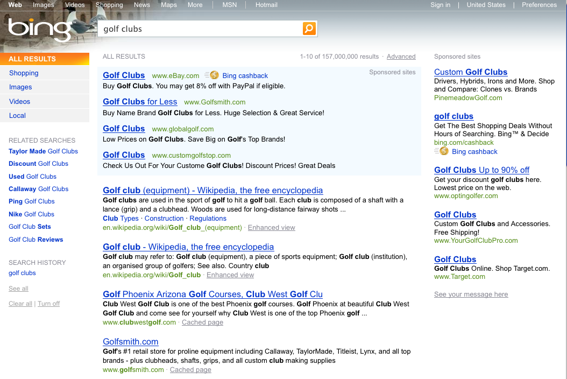 Three Things You Can Do To Optimize for Bing

First and foremost, SEO should start with real content for real people. A lot of smart engineers at Microsoft (and at Google for that matter) spend their working life trying to return the best search results for their human users. So smart SEO should focus on human interest, readability, usability, and value.

Once you have provided good content for your human site visitors, there are at least three things you should do to pave the way for Bing’s search algorithms.

Microsoft AdCenter has always been a good choice for ecommerce marketers, since it converts at a much better rate than Google’s AdWords—42 percent better by some accounts. And it generally has better demographics for ecommerce marketers. Now AdCenter will become the self-service PPC ad portal for all Microsoft and Yahoo! sites, making it a very important way to address your target audience.

The Microsoft-Yahoo! search deal will have an effect on ecommerce marketing, and smart merchants will take at least three steps to boost their Bing SEO and start (if they are not already) using both Microsoft AdCenter, as well as Google AdWords.