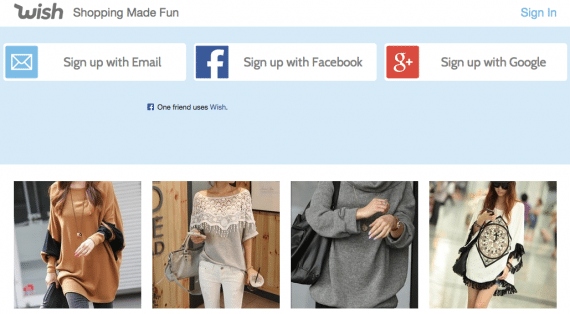 Wish connects shoppers with wholesalers and retailers that sell at steep discounts.

The Wish shopping app connects shoppers in the United States and Europe with primarily Chinese wholesalers and retailers that sell at steep discounts. The app’s functions, features, and popularity may be able show online retailers a few things about ecommerce and generating sales.

The Wish shopping app has been around since 2010. But in 2015 it is emerging as a powerful ecommerce tool. Let’s see what Wish can teach us.

The Wish app uses data mining and machine learning to show users (who are ultimately shoppers) products they are likely to buy, save, or share.

Showing just a handful of products at once, Wish is benefiting both buyers and sellers.

For the buyers, Wish eliminates clutter. It doesn’t show shirts, pants, skirts, or belts — as a few examples — that are not apt to interest the shopper. The shopping experience is streamlined.

For merchants, this means that products are presented to the most likely buyers, potentially encouraging sales.

For small and mid-sized online sellers, Wish’s popularity — perhaps half a million daily users — may demonstrate how personalizing pleases customers and ultimately may increase sales.

Merchants could seek to emulate this sort of personalization using any one of a number of effective product recommendation tools, such as the following.

Finally, it is worth nothing that Wish is a marketplace and that while the vast majority of sellers are in China or other Asian countries, sellers in other nations can also list on Wish.

Mobile Is for Shopping

Wish was conceived as a way to curate products, showing shoppers items that interest them. But it is clearly transforming into a transactional marketplace, with hundreds of thousands of actual sales.

Once might even say that increasingly, the Wish shopping app is built to sell products on mobile devices. In spite of the fact the mobile commerce accounted for more than 30 percent of holiday spending for the past two years, some online retailers and wholesalers still seem to believe that mobile devices are only for building interest or, perhaps, price checking, but not making actual sales. Wish clearly shows that this is not true.

In 2015, mobile ecommerce optimization is not a competitive advantage that will boost sales for some online merchants. It is, instead, a competitive imperative, necessary if an ecommerce company wants to be successful.

At the time of writing, the Wish app had more than 115,000 one-, two- or three-star reviews on the Android marketplace and a significant number of low ratings in the Apple app store too. These negative reviews are very frequently the result of slow shipping.

Here are a few select examples of the negative reviews.

“Buyer beware,” wrote DannyJH in the App Store on December 28, 2014. “Please reconsider before making a purchase through Wish. I placed an order and it took over a month to arrive.”

“Prices are nice, but, of course, with cheap prices, you get what you pay for. I expected that,” wrote kelz.1021 in the Apple App Store.” However, I did not expect the shipping issues to be as bad as they are.”

“Now been over 22 days since order and payment and still no items,” wrote Geraint Williams on December 22, 2014 in the Google Play store.

“I wish I could rate lower [than one star],” wrote Josiah Morris, who uses Wish on Android. “I ordered a $9 item before December began, and it is now December 29, and I still have not received my item.”

It is important to note that Wish has an overall rating of more than four stars on Android and Apple products, but it is also surprising that products offered at a 50-to-80-percent discount over retail prices would earn more than 100,000 bad reviews.

Price, it turns out, is not the only thing that matters in ecommerce, so that small and mid-sized retailers can find ways to compete without necessarily offering the lowest price. As an example, offering relatively fast delivery may be enough.

Customers Are Worth a Lot

Wish has a lot of users and customers. In fact, the app’s user base could be its most compelling feature, and those customers are worth a lot.

As an example, commerce journalist Jason Del Rey has predicted that Walmart will buy Wish in 2015. In the Re/code article, Del Rey points out that Wish “has been one of the Top 10 shopping apps on the iPhone for much of this year and recently closed a large undisclosed investment from Yuri Milner’s DST Global that sources say valued the app maker at $1 billion or more. The app lets shoppers buy clothes and accessories directly from Chinese manufacturers, for insanely low prices that Walmart would be proud of. An image-heavy layout plus an algorithm that fine-tunes what products are shown based on browsing behavior translates to highly engaged users.”

If Wish’s “highly engaged users” help to make it worth $1 billion or more, even small online sellers should recognize how much good customers are worth.