Marketing can be bewildering. You decide which combination of creative, content, and promotion leads to the best conversion or return on investment. How should advertising or labor be allocated? Should an online retail business focus on search engine optimization, content marketing, or something else? How are you addressing your audience of potential customers?

To cope with marketing’s potentially mysterious side, the industry has developed media models to organize, measure, and improve marketing campaigns. One of the most popular is called PESO — Paid, Earned, Shared, and Owned media.

This model makes it relatively easier to determine who creates the promotional content, who develops the audience the content is intended for, and who controls the distribution of the content. 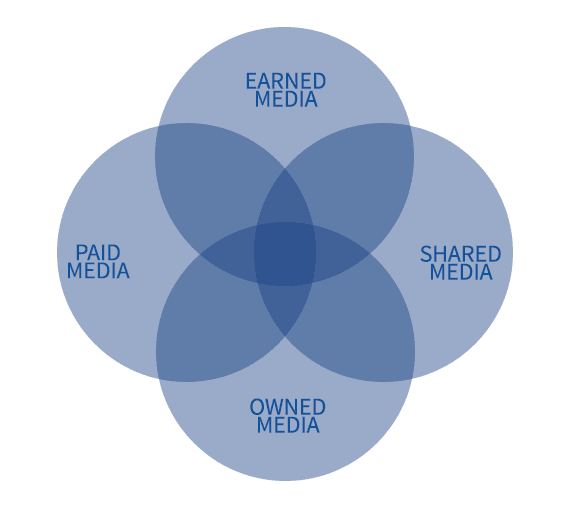 By organizing marketing tactics into paid, earned, shared, and owned media, you gain a better understanding of who creates the promotions, who owns the audience for the promotions, and who controls the distribution of the promotions.

Perhaps the most obvious category in the PESO media model is paid media. It describes promotional content a company creates but is distributed or promoted by someone else, typically to an audience the other party owns.

For ecommerce, pay-per-click advertising is a common example of paid media. You create a simple text ad that is shown when someone conducts a search on Google. The ad copy is your creation but the means of reaching potential customers belong to Google and the potential customers are Google’s users (customers).

Another example could be a video ad on YouTube. Again, your company creates the video, but the platform is YouTube’s and the audience is using YouTube. Buying an ad in a newsletter or on a website is paid media, as is an ad on Hulu, Pandora, or in a local newspaper. With paid media, you are buying the right to communicate to an audience someone else created on a platform someone else owns.

Word-of-mouth marketing, customer-submitted reviews, and posts about your store are all examples of earned media. Earned media is content about your business that others created and distributed.

Your business might promote a press release or volunteer to be interviewed for an article or podcast. When the journalist or podcaster publishes content mentioning your business, you’ve earned that exposure.

Earned media might also come in the form of reviews on marketplaces. If you sell widget X on the Amazon marketplace and customers write reviews about widget X and your business’s ability to deliver it, those reviews are earned mentions.

Earned media can be measured in mentions or share of voice.

To measure shared media, you could count followers or track conversions.

Blog posts are one of the most common examples of owned media. For the most part, a company creates blog posts, controls the platform on which those posts are published, and builds the audience who will read the posts.

The business owns or controls everything from one end of the tactic to the other.

Other examples of owned media in the ecommerce and retail context might include on-site banner ads, a small brochure inserted into a shipping box, or, to a degree, your email marketing list. Product packaging can be owned media, as are signs in a brick-and-mortar store.

Owned media could be measured in site traffic, newsletter subscriptions, or sales conversions, as examples.

Blending Media in Your Campaigns

The PESO model organizes promotions around who creates content, who develops the audience for content, and who controls the distribution of content to a particular audience. Once we understand what each of these mediums does, we can blend them together to create a marketing campaign.

There are many ways an ecommerce business might use each of the PESO media types to support a single marketing campaign.

Here is an example. Imagine you have an online t-shirt store, selling designs around having a beard, smoking cigars and pipes, and eating bacon. Your primary customers are men from about age 35 to 45 who wear beards. You want to create a new marketing campaign to boost t-shirt sales 5 percent in the next six months.

Plan a series of blog posts, a few “story” videos, some social interactions, and a public relations campaign. Chart your plan and assign activities to each of the media types.

As you begin your campaign, monitor and measure each activity. If something is underperforming, modify it or cut it. If an activity is generating a relatively better return on the time or money invested, do more of it.