Ecommerce Shines in the Second Quarter of 2012

The first half of 2012 continued the 2011 fourth quarter trend of strong ecommerce growth. In Q2, online retail grew nearly four times the rate of total consumer spending in the U.S., according to ecommerce research firm comScore. The Census Bureau reports that U.S. ecommerce sales in Q2 adjusted for seasonal variations, was $54.8 billion, an increase of 3.3 percent over Q1 of this year. Total retail sales — ecommerce and brick and mortar — were $1.1 trillion, a decrease of 0.4 percent from Q1. However, compared to last year, Q2 ecommerce sales were up 15.3 percent, while total retail sales grew 4.3 percent.

Consumers of all income levels increased online purchases by double-digit percentages in Q2 2012 over the same quarter in 2011. Those earning $50,00 to $99,000 showed the largest increase at 19 percent. This segment comprises the largest share of total ecommerce shoppers at 43 percent. Those earning less than $50,000, comprising 23 percent of all online purchasers, increased their spending over the same quarter last year by 17 percent. In contrast, those with incomes over $100,000 boosted their spending by only ten percent over the same period in 2011. 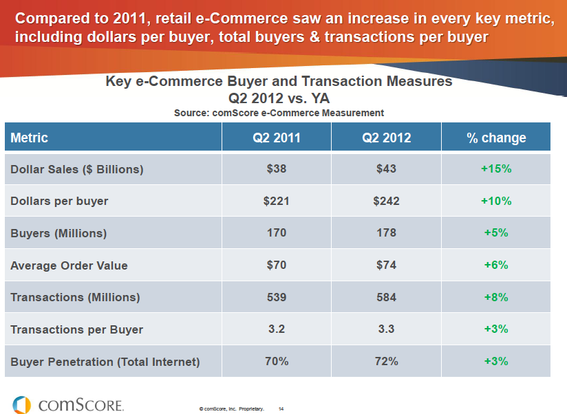 Ecommerce sales rose in the second quarter of 2012 across many metrics: overall sales, number of transactions, transaction size.

Compared to Q2 last year, the number of people engaging in ecommerce increased 5 percent from 170 million to 178 million. The amount spent per shopper increased 10 percent, from $221 to $242. The average order value increased six percent from $70 to $74. Total transactions grew from 539 million to 584 million, an 8 percent gain.

Product categories that have experienced the strongest growth — at least 15 percent — are: digital content, consumer electronics, flowers and gifts, computers and peripherals, event tickets, and apparel and accessories.

Not surprisingly, ecommerce sales peak in the coldest months, quarters one and four.

The percent of ecommerce transactions with free shipping fell to 42 percent, down from all-time high of 52 percent in Q4 2011 and 49 percent in Q1 of 2012. If free shipping is not available, 61 percent of shoppers prefer to take advantage of free in-store pickup rather than pay for shipping.

A flexible and clear return policy is very important to shoppers. Forty eight percent of respondents stated that a lenient and easy to understand return policy would both make them more likely to buy from that merchant and recommend the merchant to a friend.

In another study conducted on behalf of UPS, comScore found that while 83 percent of respondents were satisfied with ease of checkout at ecommerce sites, only 65 percent were happy with return and exchange policies.

Customers want to know early in the checkout process what shipping costs they will incur. They also recognize that a minimum purchase amount — about $50 — is required for free shipping. Online buyers want flexible shipping options and a guaranteed or at least estimated delivery date. Of the 3,000 respondents in the survey, 28 percent said flexible delivery options are important to them. Forty two percent of respondents said they had abandoned a shopping cart because of a delivery date that was too distant. Four to seven days from the order date, not a processing date, is how long consumers are willing to wait. Sixty seven percent choose economy ground shipping if it is free but still want delivery within the seven days. Seventy five percent of purchasers want tracking information from the merchant, via email, text, or on the seller’s site.

comScore found that social media users are frequent online buyers, with LinkedIn and Pinterest users being the largest average spenders. Facebook trails Twitter as well as LinkedIn and Pinterest. Jewelry, other luxury goods, and accessories sites have the highest concentration of Pinterest users followed by flowers, gifts and greeting card sites. It constitutes 30 percent of referral traffic to apparel sites, impressive for such a new social media entrant. Facebook is the largest referral source.

Ecommerce merchants are doing much better than their brick and mortar counterparts. Take advantage of the seasonal lifts in online purchases by offering special deals or discounts in the winter months. Flexible shipping is an alternative that is becoming increasingly popular with consumers and can help ecommerce merchants differentiate themselves. One to three day premium shipping should be provided to those who want fast delivery.

Make sure your return policy is clear, easy to find on your site, and as flexible as you can make it. If you haven’t done so already, optimize your site for mobile shoppers, especially tablet owners who are big online spenders. Make sure you participate on social media sites, including Pinterest, which has a very high growth rate in users and shoppers.