Apple Pay is a new payment service announced by Apple on Sept. 9, with a launch date of Oct. 20. The service works with Apple iPhone 6 phones, using near field communication (NFC) technology. For users of iPhone 5, 5c, and 5s, the payment service will work if they buy an Apple Watch, which is scheduled for release in 2015.

Apple Pay works in physical stores. It allows shoppers to pay using their phones if the retailer has installed the NFC terminals. Shoppers need to store their credit card information in Apple Passbook by either syncing the cards from the iTunes service or by taking a picture of the credit card and storing it in Passbook. 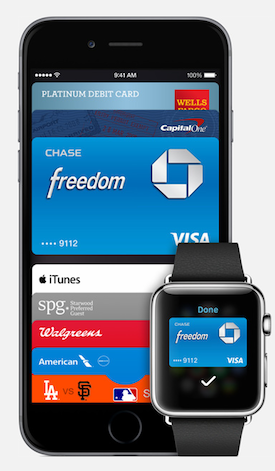 Apple Pay also works with mobile apps on iOS. Leading apps — such as Target, Uber, Panera Bread, and Groupon — have already signed up to support this service.

Currently Apple has no plans to support shopping on websites.

Apple Pay supports all leading credit cards. Apple has also worked with large big banks to make the service attractive and secure before the launch. Apple plans to launch this service with 220,000 retailers, so there will be plenty of places for shoppers to try out the service.