Facebook will soon make a dramatic change to individual user Profiles, turning them into “Timelines,” which Facebook calls “a new kind of Profile.” 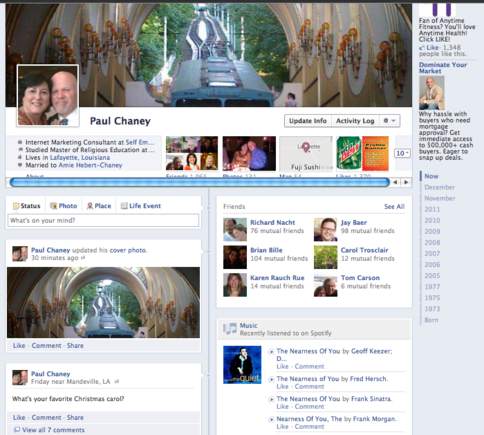 Facebook debuts Timeline, “a new kind of Profile.” The image is the author’s Timeline page.

Facebook says its motivation for the change is to provide users with a storyline of their life’s most significant moments — graduations, marriages, birth of children, a new job and other events worth celebrating. It represents a shift from a focus on transient, real-time events to a longer-term outlook, one that considers the growth and maturation of its original user-base: college students.

“Over time, your profile evolved to better reflect how you actually communicate with your friends. Now you can share photos of what you did last weekend, and updates about how you feel today. But since the focus is on the most recent things you posted, more important stuff slips off the page. The photos of your graduation get replaced by updates about what you had for breakfast,” wrote Facebook product manager Samuel Lessin, on The Facebook Blog.

Though Timelines are currently available only for individuals, Facebook’s development path has long been to take changes to Profiles and incorporate them into business Pages — “Fan pages” — as well. There is already speculation that Timeline will do this, too.

Mashable, the tech blog, cited an unnamed Facebook source in a September 27 post, who said, “Consistency in both functionality and appearance is really important to Facebook, so we hope to make Pages more consistent with the new Timeline in the future.”

Maintaining consistency within its operating system was presumably Facebook’s reason for changing the layout on Fan pages earlier this year to match that of Profiles. So it is conceivable the site will eventually do the same with Timelines. However, Facebook has not announced a date for such a transition.

In an effort to prepare merchants for what such a change might mean in terms of its effect on sales and marketing, let’s look at the three components that make up the new Timeline: “Cover,” “Stories” and “Apps.”

Cover is a billboard-like image that sits atop the Timeline, as shown in the author’s Timeline page.

The first thing you will notice is that Timelines are much wider than current Profiles and have more visual appeal, due, in part, to the large “billboard-size” photo at the top, which Facebook calls the “Cover.” It replaces the five thumbnail-sized images that currently adorn both user profiles and Fan pages. Users can select an image of their choosing.

The user’s avatar is scaled to fit a 133×133 pixel space in the lower left-hand corner of the cover image, which is 851×315 pixels. You can use larger images for the Cover, but they will be scaled to fit, too.

In my view, the Cover provides an attractive alternative to the current five thumbnail images. I envision merchants using it to promote products and special offers, upload large-scale versions of their logo, or even to provide well wishes to Fans, not unlike the way Facebook user Sarah Cooper does for her friends.

Regarding the avatar — called “Profile Banner” — Fan Pages currently allow up to 180×520 pixels to use in branding. Given Timeline’s large Cover layout, I suspect that Facebook will reduce this branding space.

Stories will continue to appear in reverse chronological order — the latest appearing first — but are now spread between two columns. Users can choose Stories they wish to feature and can “star” favorite posts so that they double in size, or hide stories to not appear. 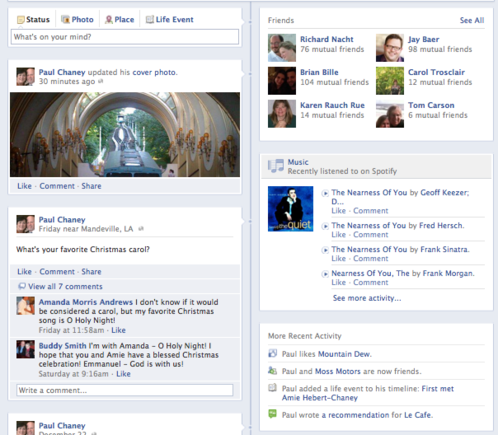 In the right-hand column of the page is a timeline (hence the name) segmented by month and year.

Further, users can go back in time to fill-in important life events.

Companies can use this feature to provide Fans with a chronology of the significant milestones in the life of the business, update Fans on current happenings, special offers or promotions.

Along with Timeline, Facebook is introducing a new kind of social app that “lets you show the things you like to do on your timeline — the music you listen to, the recipes you try, the runs you take and more,” said Lessin in his Facebook blog post.

What this will mean for businesses is anyone’s guess, but I would not be surprised to see Facebook app development companies like Wildfire and North Social introducing similar apps for Fan pages, or at least adopting current apps to fit the new scheme.

The shift to Timeline has been criticized by Facebook users — see the post in All Techie News — primarily over privacy concerns. Detractors allege that Facebook, to appeal to advertisers, is simply seeking to capture more user data.

From the standpoint of usability, thanks to its two-column layout, Timelines takes getting used to. Items appear more random than in the previous version and not just a little hodgepodge. Still, with the ability to feature items so they cross both columns, merchants could keep key content more centrally focused and reduce confusion.

The other concern is that, in an effort to take advantage of the new layout, merchants may immediately opt to use Profiles instead of Pages, which violates Facebook’s terms of use.

Companies that currently now use Profiles may find the visual attractiveness provided by Timelines too much of a temptation and refrain from switching to Pages altogether, even though Facebook provides a mechanism by which to do so.

Mountain Dew, the soft drink, has already found a way to benefit from Timelines by allowing its 6.3 million Fans to download branded cover images, which it calls “skins,” for use on their Profiles. 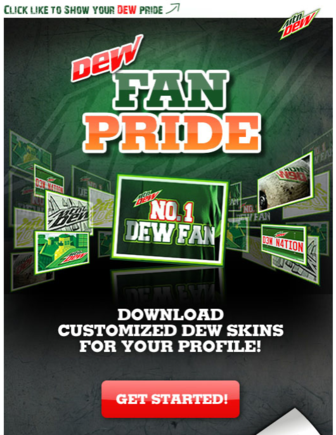 Mashable even convinced some graphic designers to create Fan page versions of Timeline to anticipate how notable brands such as Burberry and McDonald’s might use them.

Though Facebook has not disclosed plans to switch Fan pages to the new Timelines format, my advice is to make preparations for it now. Here are some steps to help merchants prepare.