U.S. ecommerce sales rose a stunning 12 percent in the first quarter of 2011 to more than $38 billion dollars, as soaring gasoline prices, unemployment concerns, and shopping-related smartphone usage affected online retail, according to a report from research firm comScore.

“Faced with rapidly rising gas prices and stubbornly high unemployment, consumers continued to take advantage of the Internet’s lower prices by shifting their spending from offline retail stores,” said comScore chairman Gian Fulgoni. In fact, in the first quarter, the growth in ecommerce spending was roughly double that observed at offline retail. While we would expect online buying to dampen slightly if gas prices continue to eat into discretionary spending, it’s clear that ecommerce has become a mainstay in consumer behavior, driven by the attraction of both lower prices and convenience.”

The comScore findings were effectively released in two sections with the firm announcing ecommerce sales numbers and then providing greater context in its “State of the U.S. Online Retail Economy in Q1 2011” broadcast May 17. 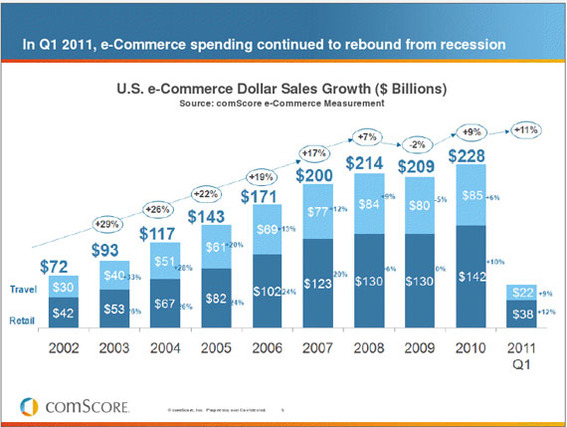 In the comScore broadcast, both Fulgoni and comScore’s senior director Andrew Lipsman emphasized that consumers were worried about rising prices in general and rising gasoline prices in particular, saying that some 54 percent of survey respondents said that prices were their main economic concern. That figure was up from 42 percent of those surveyed in January 2011. What’s more, some 30 percent of respondents specifically identified gasoline prices as their top concern.

Gasoline prices, which were at a U.S. national average of $3.96 per gallon on May 16 according to the Energy Information Administration, have something of a paradoxical affect on online retail sales.

As gas prices go up, consumers seek to balance their personal budgets, and, according to Fulgoni, turn to bargain hunting online, which gives ecommerce merchants something of a boost relative to other retail channels.

Unfortunately, this apparent boost is not what it might seem. Gasoline prices and related oil prices are driving up the cost of all sorts of consumer goods. For example, U.S. wholesale prices rose 0.8 percent in April in part because of increases in freight — thanks to the aforementioned higher gas prices and the cost of plastic’s key raw material, petroleum. Overall wholesale prices have risen 6.8 percent in the past 12 months, according to market watch.

As consumer prices rise, shoppers are likely to cut back on their overall spending. In fact, according Lipsman and the comScore findings, for every 15 cents that gas prices rise, the ecommerce growth rate declines by 1 percent. 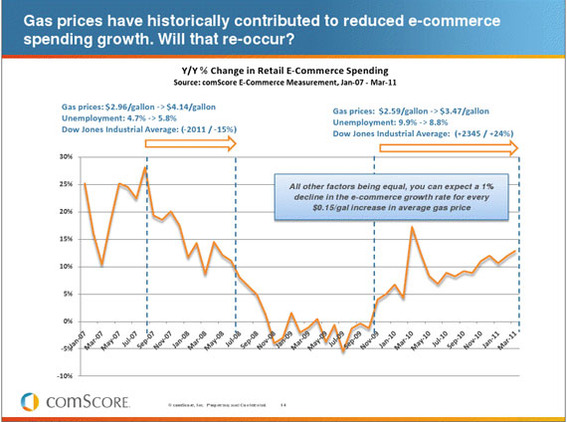 Rising gasoline prices have an adverse effect on ecommerce, but the impact is not as great as it is for other retail channels.

Economic concerns, particularly related to unemployment rates and job security, may have also had a two-pronged effect on ecommerce as some 54 percent of those surveyed in the comScore study said they believed it would take a year or more for unemployment rates to fall back to more acceptable levels.

So on the one hand, shoppers seeking to cut spending might look for deals online, which will help ecommerce relative to other channels. But, again, total spending may slow. 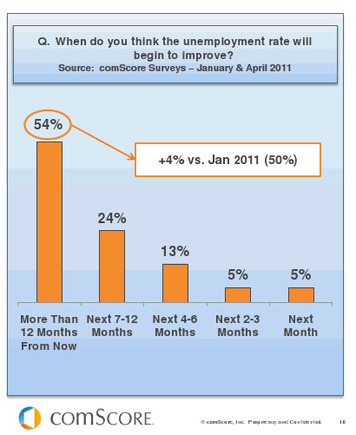 While there is evidence that mobile commerce has not yet taken off — see “Eccomerce Sales from Smartphones Slow, 5 Suggestions to Help” — smartphones may eventually dominate retail.

For example, Fulgoni pointed out that U.S. mobile retail content grew 90 percent from March 2010 to March 2011, making it the single most active mobile content category. In the same time frame, smartphones usage in the U.S. rose from 15 percent of all mobile subscribers to 31 percent. And according to data from IDC and Gartner — two research and analysis firms — there are one million new smartphones sold each week.

Finally, half of mobile shoppers and 38 percent of America’s 71 million smartphone owners use their handsets to check prices online. 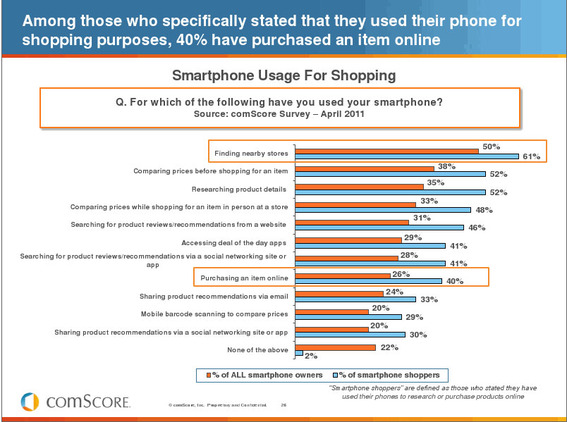 Mobile commerce may soon have a significant impact on ecommerce.