After more than three years, Google Analytics is bringing back its popular Benchmarking reports.

The resurrected Benchmarking reports section is rolling out now (and over the near term) to Analytics users who have already volunteered to anonymously supply data for the benchmarking. To learn if a company is participating in the benchmarking program, visit the Account Settings section in the Admin tab.

Once the Benchmarking reports are enabled for a particular Analytics account, a new “Benchmarking” link will appear in the Audience section.

Google Analytics is offering users the opportunity to compare their data to data from any of approximately “1,600 industry categories, 1,250 marketings and [seven] size buckets.” For each comparison, Google Analytics will reveal the number of sites from which data is drawn.

“Benchmarking should be one of the great advantages of internet marketing,” wrote Ben Barrass, data and digital marketing manager at Econsultancy.

“This wealth of information gathered by individual sites, anonymously combined and shared, requires a large volume of reliable user data in order to make it valuable (of which Google Analytics has), which in turn provides the volume to power the level of segmentation required to make these reports meaningful for specific businesses.

“Contextualizing your site performance is a great way to add meaning to the work you have done, plan what needs to be done and gain insights into trends within the industry.”

Along with the Benchmarking announcement on September 10, the Google Analytics blog offered a short case study outlining how vacation rentals firm, Twiddy.com, had used Benchmarking to boost sales.

After reviewing the Google Analytics Benchmarking reports, “it was clear we were missing a huge opportunity in email marketing,” CMO Ross Twiddy said, according to the Analytics blog. “The Benchmarking reports were powerful enough for us to reallocate time, budget and resources towards running down the deficiency.”

According to Google, the Twiddy marketing team “used Google Analytics data to revamp their email marketing and improve the flow and process … [and] even used Google Analytics to choose the best-selling messages for their email campaigns. Their analysis helped them zero in on the factors that were most consistent in repeat bookings: the price range, location, rental type, and even vacation week that would be most likely to convert with for each customer.”

“We launched an email last week based on our findings, and it shattered our email marketing records: a 48-percent average open rate and a 40-percent clickthrough rate,” said Twiddy, according to the Analytics blog. 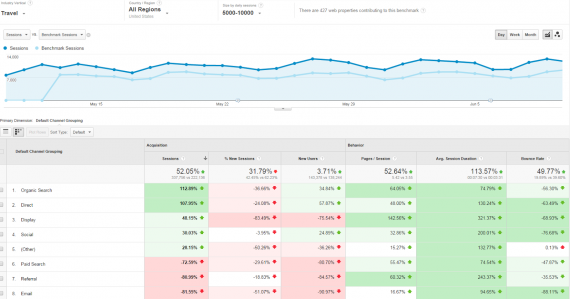 Taking a look at the Google supplied Twiddy Benchmarking session report, one will notice that Twiddy had been underperforming in the number of sessions originating from email by about 81.55 percent relative to the travel industry vertical. Thus, the opportunity for significant improvement relative to its peers.

The report also showed that Twiddy was outperforming the industry in sessions originating from organic search; direct traffic, which is frequently an indicator of good offline performance; and with display advertising and other areas.

The original Google Analytics Benchmarking feature was first released in March 2008. At the time, Google said that “industry benchmarking is a commonly requested new service that enables customers to see how their site data compares to sites in any available industry vertical. We believe this data will provide actionable insights by providing context for users to understand how their site is doing. For example, if you have a travel website and you get a spike in traffic on Mondays, you may want to know whether other travel sites get that same spike on Mondays.

“You can also compare your site against an industry vertical different than your own. For example, you might see that your industry’s traffic dips at certain times of the year while another industry’s traffic increases. Based on that information, you may wish to explore cross promotional opportunities to drive traffic back and forth.”

Unfortunately, the emailed Benchmarking report was also, later, shuttered. “We will no longer be emailing this benchmarking report on a regular basis,” a June 2012 note at the bottom of Mui’s 2011 announcement read. “We heard great feedback after our initial mailing and it turns out that a simple email is not able to meet the segmentation and analysis needs of our wide user base. We are exploring new ways to provide rich benchmarking data to our users in the future.”

It would seem that the Google Analytics team was true to its word, given its recent reinstatement.