Google offers a variety of useful free tools merchants can use in place of other more costly software. One of these is Google Docs, a free word processing tool with plenty of room for file storage and many unique tools unmatched by other word processors. The most important of these is the collaborative tools where users can easily share documents with other users. 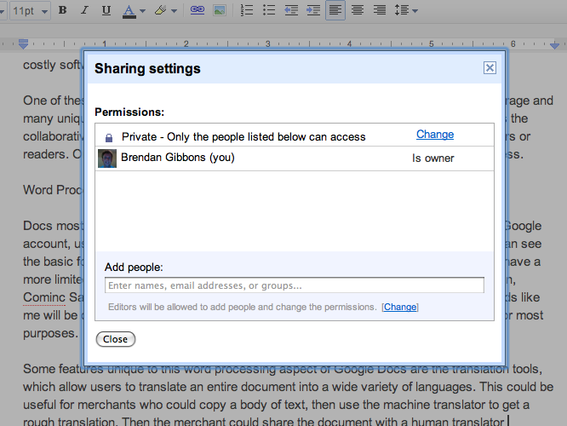 Google Docs’s main dashboard is a list of all documents, along with sharing information. Docs makes it easy for users to share any sort of document with other users, regardless of whether or not they have a Google account. Shared documents can be locked, as well, so others can only access them as a read-only document. Or, if a project has multiple writers, users can choose to allow others to work on the document with them. The “owner” of the document is the one with all the sharing power, but fortunately Google Docs allows users to change the owner so there is little interruption to work flow. Collaborators also have the ability to chat with each other in real time, using a feature similar to GChat, without leaving the document.

One thing Docs could add to improve its sharing functions would be to save multiple copies of documents so users could return to previous versions. For example, if one user makes a mistake while editing the document and saves it, another would have to go back in and change it. Other online collaborative word processors, such as Basecamp by 37Signals, save multiple versions of documents so there is no work lost. Users can return to older versions in case of errors, something unavailable in Google Docs.

Docs’s most basic feature is modeled after word processors like Microsoft Word. With a Google account, users can create a blank document that is viewable in print format. Here you can see the basic format, using text from the Emancipation Proclamation as an example. Users have a more limited set of fonts than with other word processors—only Arial, Times New Roman, Cominc Sans, Courier, Garamond, Georgia, Tahoma, Trebuchet and Verdana. Font nerds like me will be dismayed at the omission of Helvetica, but it’s a comprehensive enough list for most purposes.

One unique aspect of Google Docs is the translation tool, which allows users to translate an entire document into a wide variety of languages. This could be useful for merchants who could copy a body of text, then use the machine translator to get a rough translation. Then the merchant could share the document with a human translator who could edit the document and re-save it. Because the document is stored online, there is no need for tedious copying, pasting and attaching files to emails. It also frees up hard drive space. 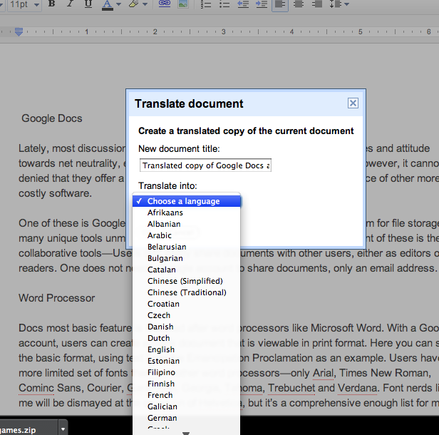 Another unique feature is the expanded ability to insert other elements than text into the document. As with Word, users can insert images, links, comments, headers, footers and a table of contents. But they can also add some more extended elements, such as mathematical equations and drawings. Here’s an example of a hasty drawing. 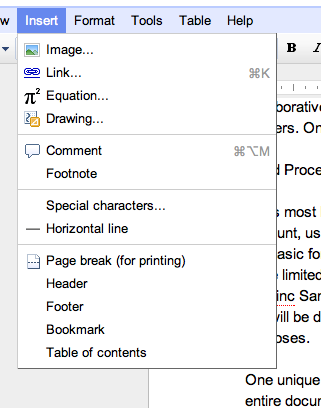 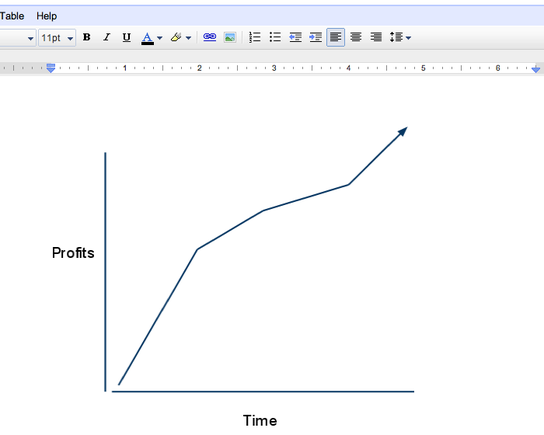 I like these features because they address some issues I have had with other word processors. Drawings on other processors are usually limited to predefined templates, and it can be very difficult to add mathematical symbols into normal documents. Usually to do either of these, I have to use another program and copy-and-paste it into the document or upload a file. Unfortunately, this often tweaks the font and paragraph formatting.

Google Docs’s auto-save feature has also saved me numerous times. Before I became more diligent with saving my documents on other word processors, I lost a lot of my work due to crashes and accidental window exiting. Google Docs saves your work every minute or so, making it easy to hold onto.

With Docs, there are many more options than just creating a text document. Users can choose from an ever-expanding variety of templates, from presentations to spreadsheets to forms.

The presentation feature is basically a slimmed-down version of Microsoft PowerPoint, allowing users to create a slideshow. They can share these presentations with other viewers or collaborators and publish them online under a unique URL, so there is no need to attach them in emails. This solves the problem of people using different versions of presentation software and not being able a document because it is not saved as a compatible file type.

Example of PowerPoint on Google Docs.

Merchants can use many other Docs templates to create spreadsheets for accounting, order management and other purposes. While this would require much manual input and probably would not be useful for large ecommerce companies, it could be a good tool to manage personal finances or small inventories. These spreadsheets have comparable features to Microsoft Excel, but because they are all stored online, there is no chance of losing important information.

Google has also approved hundreds of templates, both from its own developers and other Docs users. These range from business cards to birthday cards, letters, resumes and much more. After perusing dozens of these templates and seeing the hundreds that are available, it is safe to say that Docs offers templates for most any type of document you might want to create. 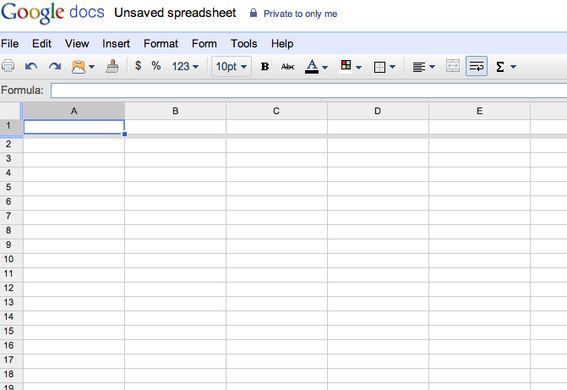 Example of spreadsheet on Google Docs.

Google Docs is a vast free resource for word processing, spreadsheets, presentations and much more. It does all of these things well, though it is more comprehensive than it is extensive. Like most Google services, it is free, collaborative and constantly being updated. However, it seems the only thing Docs does better than many other software available is ordinary word processing.